They’re so sickly sweet, you never want more than one.

To be sure! And since I generally eat lower carb, you can imagine how I felt when I discovered the cake I’d pre-bolus’d for had nowhere near the carbs in it and I was forced to eat FOUR Creme filled eggs

If I ate four creme eggs at once, it would take me 24 years to get back to normal …

@Eric, this cake’s for you: all cake, no frosting, lots of carbs: 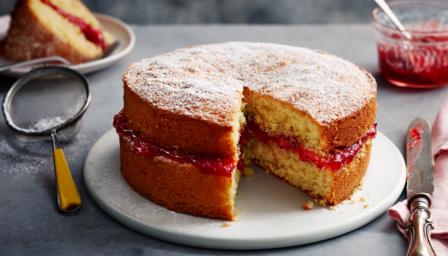 Why would you trust anyone other than Mary Berry to make the perfect Victoria sponge cake? Light and fluffy and filled with jam, it's a British classic.

I like to use a lightly sweetened mascarpone filling and fresh berries or a generous drizzle of jam.

You, guys!!! Well here is something I miss.

Bakes up well gluten-free, too.

I don’t joke about things like that because I know about consequences.

If you don’t know your carb ratio, aren’t prepared to cover a low, and/or are still in denial it’s not a joking matter. You can’t ignore diabetes a little and frequently and make it up later with a big sacrifice to “balance the books”. Diabetes is like the death of a thousand cuts. Every little cut takes something away.

I was in denial for a decade until my vision was affected and I developed an infection that required amputating a digit.

Things you can’t avoid are like accidents Things you could have avoid but didn’t are consequences. Many complications of diabetes imo should be called
consequences of uncontrolled diabetes. Unrestrained lust for food and a long healthy life are mutually incompatible.

I was once a gifted pastry and bread baker and eater until I received the gift of type 1 diabetes. Now I only bake for others.

After losing things that I wish I hadn’t, I adopted the “one package equals one serving” rule for deserts. If I can’t eat one package without being able to easily cover it with insulin, I won’t buy it. If my wife does, I get no more than one measured serving. Anything “left” gets portioned, packaged and frozen. No exceptions.

Don’t get me wrong, I eat well. But everything that I eat is measured and in moderation. If I have a hankering for the taste of donuts, one donut will be worked into a future dinner.