Here are a couple of collapsible water bottles, if this is something that might be useful for you.

I know there are a bunch of different versions of these, but these are the ones that have been recommended by Runner’s World. 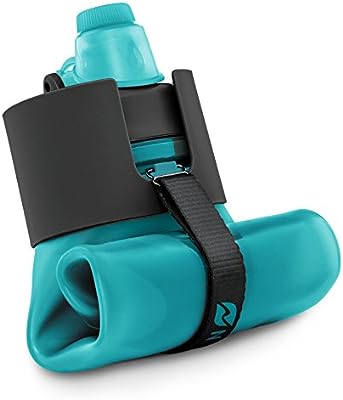 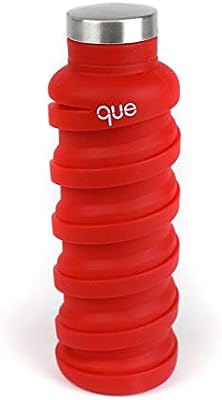 When would you use this instead of water bottles on a running belt or camel back? just preference?

instead of water bottles on a running belt or camel back? just preference?

I personally don’t like the hand-helds because you are doing more work with that weight than when you have them on your hips. Your hands basically move almost twice the distance as your hips.

But I know a lot of people prefer them because removing and re-attaching to a belt may not be easy.

Ultimately it comes down to preference.

You use a hand-held, right?

I also have a camel pack, but I am not a fan of slurping out of the straw.

I suggest trying different things and seeing which one you prefer!

I like the Amphipod clip-on bottles. They are pretty easy to use.

I have ones that go in lil pouches on my belt.

I personally don’t like the hand-helds because you are doing more work with that weight than when you have them on your hips.

but if I were to try out hand helds then I’d want one like these so I could throw it in my belt when done like you said. I guess I’m a lazy runner that I don’t want to carry my bottle in my hand !

I guess I’m a lazy runner that I don’t want to carry my bottle in my hand !

Oh sorry! I thought you carried. Like in your video in the Philly half, where they handed you a bottle. Sorry, my mistake!

If you don’t carry, check out the Amphipod stuff - the ones that clip. You can put any number of clips on your belt depending on how long your run is, and have 1, 2, 3, or 4 bottles if you want. And you can have some with water and some with Gatorade or a sweetened drink to cover both hydration and carbs.

Another great thing about those is that you can orient them vertically or horizontally, and put them wherever you want.

But send me a link of what you use, I’d like to see it!

I guess I’m a lazy runner that I don’t want to carry my bottle in my hand !

No, not lazy. Efficient!

where they handed you a bottle

I positioned family and friends so that they could hand me gatorades. I’d have a couple gulps and then throw the bottle. It felt so wasteful but also necessary.
When running I just have water in my water bottles, but I think I want to try having gatorade or diluted gatorade.

belt and water bottle holder - cheap, doesn’t move around, the bag part holds a lot, belt is adjustable for what I’m wearing on that run, I can wash it in the sink super easy: 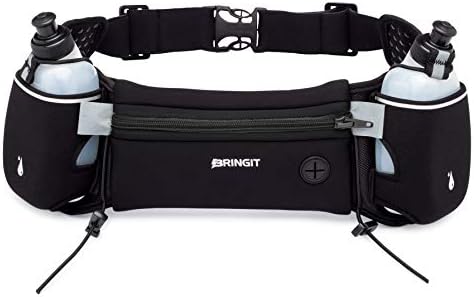 I have the water bottles and bag part of it on my back so it does take some maneuvering but it’s a nice distraction too !

Amphipod stuff - the ones that clip

Think I could have one on the front of my belt, horizontal, without it bumping into my elbows/arms? I have my belt around my waist, not hips, because it doesn’t bounce around and is actually really comfy there

I have my belt around my waist, not hips, because it doesn’t bounce around and is actually really comfy there

I do the same. I have it tight to keep it from flopping around.

Think I could have one on the front of my belt, horizontal, without it bumping into my elbows/arms?

I usually carry two bottles on the sides, and I have them horizontal so that my arms don’t hit them. They fit well there, and do not get in the way.

On the back I have room for some spare parts.

The push-pull-tops do not squirt out until you open them.

Here are their bottles. You can get different sizes. But only the ones called RunLite Xtech fit in their belt clips. That is what you want - RunLite Xtech - not the hand-held!

Also look for the push-pull-tops here.

Before you buy anything, let’s chat about it all. Because you want it all to work together. All the parts - BG testing, carbs, water, pump (although I think you wear yours on your bra

So - before you buy any single component - I would first suggest getting an idea how you want to have the entirety of your arsenal setup.

I can give you some suggestions on that. I am happy with my gear setup.

I will believe it when I try it. I swear some of us are not built for running belts. I run and tug and run and tug. The dang thing wants to hang out under my armpits. Clearly it didn’t get the message that it’s a running belt not a running bra. And it drags my shirt up.

I made it like three runs and fired it.

The running backpack vest thing I love. Can’t go up anymore. Too much weight for the average person. But I’m slow.

Big bummer about the belt shape shifting into a bra! I was nervous it would fit me weird too or ride up to my arm pits, but I guess I got lucky that it hasn’t so far.

Too much weight for the average person.

Some intense FUD runner will probably make some argument for weight (or he has and I’m ignoring it) but I’m just trying to maximize my comfiness while running!

faster than if you were not moving at all !