I just put on a new G6 sensor, and after a couple of minutes I felt “wetness” on my arm. It took me a while to figure out what was happening, but the insertion site was bleeding like crazy. I had to swap it out for another new sensor.

That’s the first time I’ve had that happen. And I just realized it’s probably due to the 2x a day 81 mg aspirin I’m taking due to the hip replacement surgery I had recently. I have the second hip surgery coming up, so I will still be taking it for a while to help prevent blood clots.

Any tips for locations that are less likely to bleed? I prefer arms for sensors. I’ve been getting bruises at my MDI locations too.

I’ve had a lot more issues with my abdomen bleeding than my arm. Pretty rare on the arm.

I had to swap it out for another new sensor.

I understand that it was bleeding, but why did you have to swap it out? Keep sopping up the leakage with paper towel or tissue until it clots. When I get a bleeder it generally reads just as well as one that didn’t bleed.

@bkh
Thanks for this info. I guess I just reacted and assumed it wasn’t going to work well, not having any experience with it before. If it happens again, I will give it a go before replacing it.

When I get bleeders, I usually have two days of false highs and false crashing lows, then it’s mostly okay for the next 4-6 days, and then it starts to get jagged and temperamental again.

I personally ditch sensors if they’re massive bleeders bc I’ve had them enough and gotten consistently rough results with them that it’s better for me to swap. Based on my podding observations, too, I think my skin’s more prone to bleeding issues than the norm.

For me, back love handles are the best. If I go too low and am in too thin of an area, I can count on a bloodbath. FWIW.

I’m going to try my arm when I change mine tonight, previously I’ve used mostly my lower back/upper buttocks area and a couple times my stomach, but I didn’t like it there. I need to start trying new spots for my Tandem, but my stomach has been the go to–not even my whole stomach–too low it catches and comes off with my pants, too high it often doesn’t stay on well because there’s not a lot of fat.

Where on your arm is best? I’ve got a sensor change in about 5 HRS and want to try my arm out.

@jo_jo
I routinely use the back of my upper arms for the sensors. It’s pretty flabby there and works great. The only thing I have to watch is if I get it just “wrong” and I sleep on it. I’m a back-sleeper, and sometimes it’s right where my arm rests on it. That can cause pressure lows. So then I put a pillow under my arm.

I only use my side delts. Never tried the back of the arm. 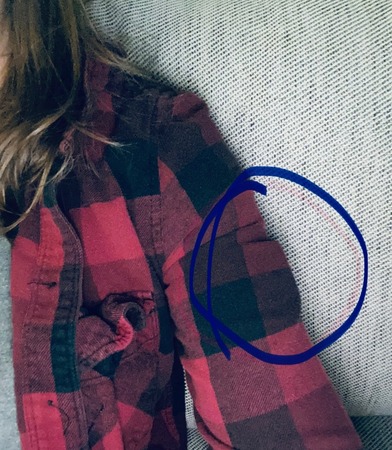 I went with here (whatever this place of the arm is). I’m still awaiting warm up. It didn’t hurt, I squeezed one side of my arm against the wall and the other my torso and put it on that way. I sleep on my sides back and forth all night. I think this should not be pressed down it’s kind of wrapping around to the front so idk, I’ll see how it goes!

I’ll see how it goes!

That’s all you can do! We all learn as we go! Good luck!

I saw a teenager wearing one on her forearm…like the top of it…last night at my son’s orchestra concert.

I’ve never seen one there before! I thought it was super cool!

I use my upper, back arm. I do get bleeders occasionally. I think in some instances they are caused by my failure to press down evenly on the sensor when pushing down on the orange inhection tab. The ejector sort of kicks back and it can cause bleeding.

I had tried the upper outside of my calf on the recommendation of a couple people here and loved the placement, but couldn’t get a sensor to last (not error-out) for 10 days. Might be worth a try for you? I am back to solely using upper side/backs of arms (I get errors on my stomach as well).

I’m new at Dexcom G6 I’ve only had it three months. I had this problem with two of my sensors. I’m also on blood thinners and aspirin 81 mg. I just kept a tissue on the spot until it stopped bleeding. The first time it happened I was afraid the transmitter and sensor would be damaged, so I asked Dexcom and they told me hold a tissue on the sensor until the bleeding stopped. Everything was just fine.

I was afraid the transmitter and senor would be damaged, so I asked Dexcom and they told me hold a tissue on the sensor until the bleeding stopped. Everything was just fine.

My only concern about bleeders is that blood doesn’t cover the electrical contacts of the sensor or transmitter. Blood is fairly conducive.

Jan, Sorry to wait so long to reply. I used to have a bleeding problem but after conferring with others came up with a solution. First on the arm the sensor should be between the triceps and deltoid muscles. Before installing the sensor make sure that you cool the insertion area with an ice pack. After the ice pack make sure the area is dry and insert the sensor. The cold contracts any veins in the area to help prevent any bleeding.

Mine bleed for 8 hours and wouldn’t clot. I’m on aspirin and blood thinners after heart attack

I just use my stomach - it’s the least likely to be in the way there. If mine bleed, I have to take them out. Even the tiniest bit of blood gives me crazy false lows and it inevitably happens at bedtime so I’m up all night!

@dmac
I’m just back from my 2nd surgery, so sorry I didn’t respond sooner. Thank for your reply, these are great hints and since I’m on the 2x a day 81 mg aspirin regimen again for at least 5 weeks, I will certainly use them. I think the ice pack idea is brilliant!