I posted in another thread that I use an Accuchek Mobile Meter as a back-up meter to a Contour Next. The selling feature of the meter is that it does not use test strips. It uses a cassette that has a test tape on it that is good for 50 tests. The beauty is you never have to deal with strips. You just open it up, the test strip appears and you put the blood sample on it.

There is no extra stuff to deal with like lancets or test strips.

It is powered by 2 x AAA batteries, which can be convenient but it is a bit heavy.

So Word on FUD Street is Contour is the Meter to go with.... but why?

Can you give us dimensions?

I complained about it being bulky and in typical FUD fashion @Eric challenged my unsubstantiated qualitative claims. So here you go - quantitative claims - the dimensions are in inches. 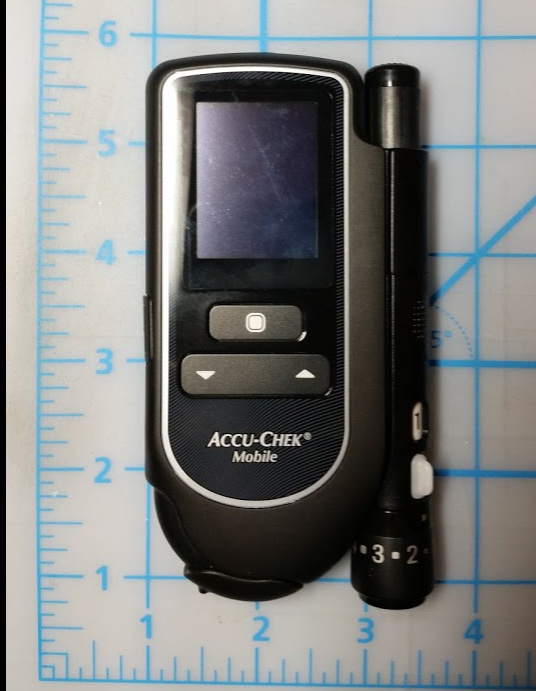 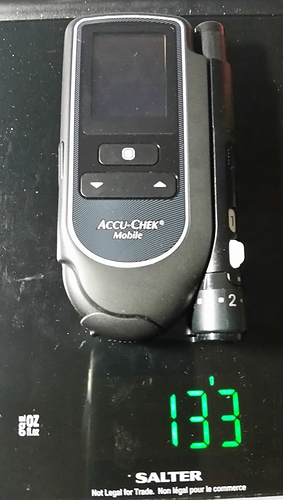 Here is the magic cassette: 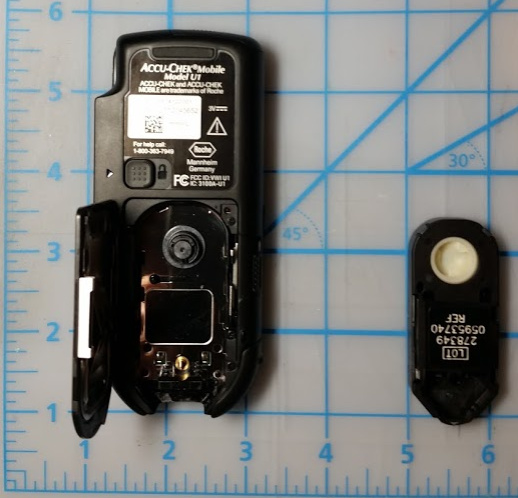 I have found the numbers fairly repeatable and between 5 and 8 (90 and 144) it matches the contour for numbers and repeat-ability. It just over reports lows in my opinion. 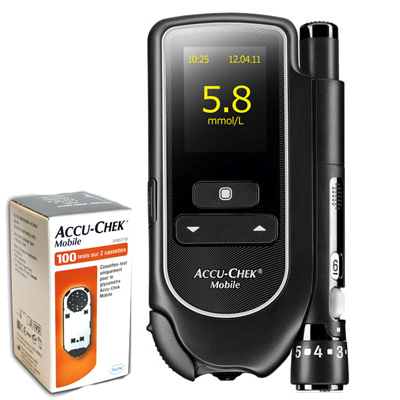 This bundle includes: One box of Mobile Cartridges (100/bx) One Mobile Meter Test whenever, wherever Strip-free testing Least painful lancing device1 Advanced accuracy Key Features: No strips. No waste. 50 tests on 1 cassette 6 lancets in a single...

Strips are on the more expensive side, but not excessively expensive. (Prices in Canadian Dollars)

Thanks for the nice review Aaron!

One problem with strips is when it’s raining. If the strips get wet, you are basically screwed.

Since it is enclosed, do you think this meter would do better in the rain than a standard strip meter?

That is an interesting take. It would do a bit better in the rain than a standard meter.

You would need to hold it vertically and then open the cover at the bottom. That would generally keep the tape dry enough to do a test. When testing, you basically smear blood on the tape. It is not drawn into the strip like most other meters, so there should be less of a water issue. You do not want to dilute the blood too much but a little does not hurt.

With the standard meter, trying to get a strip out and into the meter can be close to impossible without ruining one or too.

As you probably guessed, it is not waterproof but it is well built and can take a test in the rain.

I have this meter and it worked perfectly as a swimming meter for me (by which I mean the meter I keep on the pool deck with my glucose tablets and other supplies)because the strip cassette doesn’t seem sensitive to humidity or water (some meters don’t work under those conditions), it can be used with one hand, and there are no strips or lancets or other do-dads to remember. The one negative is that if you don’t use up strips fast enough they expire, after which the meter locks you from using them, even after changing the date (in my experience). So I quit using it when I found myself with about 70 strips I could no longer use because I hadn’t tested enough.

I was thinking about possibly getting one for running in the rain. But the expiration date puts a damper on things. How long do you have to use the strips?

I had that thought, too… but its size and weight??

t the expiration date puts a damper on things. How long do you have to use the strips?

You have 90 days to use the cassette once you install in the meter. I have tried to change the date, pull the batteries etc. but it remembers

and I have not been able to defeat the 90 days.

You get a warning 10 days before it expires.

Also, the meter will not accept a cassette that has expired. (as in past the expiry date printed on the box) I think you can cheat this by changing the date on the meter, but I have not tried it yet.

I forgot to put this in the review as a problem. I will edit.

Given that @Eric tests 50 times a day, this should not be a problem for him

but its size and weight??

It is heavy at 133 g including the test cassette and lancing device.

For comparison, the internet tells me that the Contour Next One is 36 g but you have to add the lancet and test strip weight to that.

But it is built like a tank. I think the 2 x AAA batteries add a lot to the weight issue.

Given that @Eric tests 50 times a day, this should not be a problem for him

I was thinking specifically as a meter for running in the rain, not so much as a daily use meter.

The 90 day window does kind of hurt that idea.

I am guessing the cartridge just has a chip built into it with the date. It might be possible to swap chips, such as taking one from a new box.

Much like the way Keurig tried to implement their own DRM by using an infrared light to check the code and read the wavelength of the reflected light, so that you would only use Keurig coffee pods in their coffee maker.

Might be fun to get one just to hack it.

Much like the way Keurig tried to implement their own DRM by using an infrared light to check the code and read the wavelength of the reflected light, so that you would only use Keurig coffee pods in their coffee maker.

Is THAT what the problem was?

There was a legit reason for it. I was doing a little bit of clandestine stuff at the time. Hopefully I can share the story with you at some point.

Also, the meter will not accept a cassette that has expired. (as in past the expiry date printed on the box) I think you can cheat this by changing the date on the meter, but I have not tried it yet.

I am guessing the cartridge just has a chip built into it with the date.

You guess right. There is a chip in the cartridge.

I just looked for my meter and an expired cartridge I used to have, but it appears I got rid of it (the one I had was older than the one in your picture). Maybe I’ll pick up a new one to do some experimenting on. It was a really nice meter for specific purposes.

I agree - they are a nice meter for some purposes. Free meter with the purchase of100 test strips

Free meter with the purchase of100 test strips

Exactly what I was thinking.

I lost my Contour Next One a couple of months ago. I have not idea where it is. I have been using a Contour Next USB instead.

For some reason, I have not seen an ad for a free Count Next One since I lost the meter. The last Counter Next One I got, I did a bit of begging and pleasing with the pharmacist for him to sell it to me for free, so I am waiting for a coupon this tiem

I have 8 extra Relion meters and two extra One Touch meters I could “sell you for free”.

I don’t think Pharmacare (or the companies, or whoever offers these things) offers free Next meters. I had to buy my Contour (original) as well as my Conour Next. The Contour Next One I got free for answering some survey questions.

Before using this meter, by the way all the meters of Accu-Chek, check the batteries first.
We have used the Instant and Guide and they had all the same annoying error (E-9), a message came up: please replace batteries… Well we did first with brand new ones, and to our horror the same message appeared. Then we checked the cel batteries with a Volt meter and there were all fine, all 3 volts. So this meter is faulty, not the batteries. A trick can be used, replace the batteries (2) from place, from left to right and pushed the OK button for 20 seconds, and check again… To our astonishment all worked fine. We think the software which is in the chip in planted is buggy, the design maybe German or Austrian, but te manufacturing is Chinese…beware, check the batteries first…