I used to have a medic alert tag on my watchband to notify EMTs that I have T1D in case I was injured and unresponsive. It was a bit uncomfortable and eventually wore off, but I liked the idea. I’ve been thinking about getting something similar (in function but not form) but I’m not much of a jewelry wearer, aside from my wedding band and watch, so I don’t want a bracelet or necklace. I had the bright idea that I could get a tattoo of some kind, and Google Images informs me that these are indeed a thing, but I’d like to get ideas and feedback before doing anything this permanent. Does anyone here have, or know someone who has, a T1D tattoo like this? Are there any EMTs or clinicians on here who could advise as to what information to include, how big it should be, and where it should go? Any other ideas, opinions, or feedback on this?

Any other ideas, opinions, or feedback on this?

5 years from now, when there is a cure, you are going to regret it.

I would head over to Reddit and see the amazing variety of diabetes tattoos. I am consistently amazed. Here is a small sampling 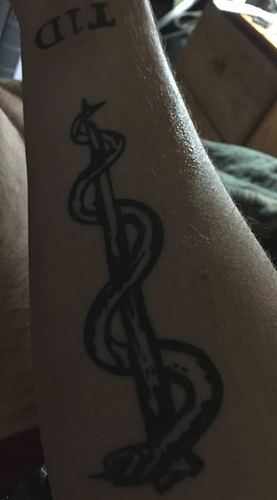 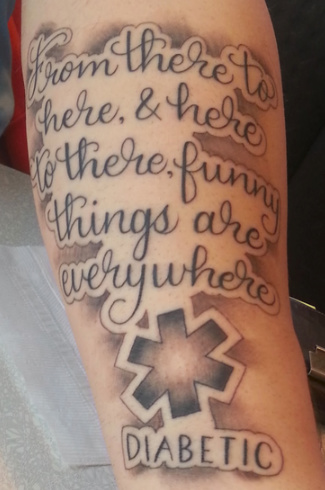 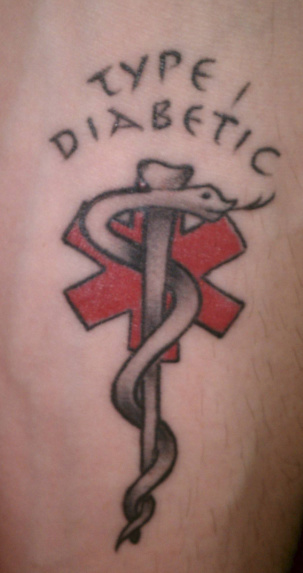 here is a good thread with a bunch of ideas.

As to whether a tattoo is right or not, I leave that to you.

I’ve heard from some paramedics before that it’s not common to check for/read tattoos unless they’re in a very obvious spot and attention-catching as a medic alert thing. But I’ve also heard it’s becoming more common to check for tattoos

Here’s a reddit thread of a bunch of paramedics basically saying testing BG is one of the first things they do with unresponsive people, and they don’t suggest a medic alert tattoo for diabetics. So I’d say get a T1D tattoo if you actually want one, not just to serve as a medic alert

Heh- this is actually one of my motivations for getting one.

I figure getting this tattoo would drastically increase the chances of a viable cure being discovered.

Then I could just get a big red “X” tattooed over it or something.

Since according to @glitzabetes it needs to be in a conspicuous place, I nominate your forehead. Just make sure to keep your bangs trimmed.

I doubt the effectiveness of medical alert tattoos. You should do some good research before getting one.

Thanks for the link- I’ll check it out.

I’ve seen lots of ideas in terms of aesthetics, but I’m more interested in function over form. What would be most useful in an emergency, where would they be most likely to see it, etc. I want something that would be useful and effective first, and then I’d worry about how it looks.

That’s what I’m trying to get started here- do you have any suggestions as to where one would research such things? The internet is full of information, but unfortunately most of it is wrong. I’m hoping to get some guidance from people who either know what they are talking about or can direct me to others who do.

I don’t have any tattoos, and I’m not considering one, but I’ve read that they are not really effective as a form of medical ID. In part because it’s impossible for medical professionals to tell whether it’s there because you have T1D or because a loved one has T1D and it’s there as a symbolic tribute or something like that. Plus, if the tattoo is on a part of the body that gets really bloody or mangled in an accident, that’s going to pose a problem. Or if it’s dark and they can’t feel anything through your clothing, they are not going to go searching for a tattoo, whereas if they feel a bracelet, they’re more likely to check it. I’ve had a handful of Medic Alert bracelets break, but they have all done so when my wrist hits lane ropes while swimming, which makes me think there’s something specific about that to make the bracelet break. In general, they are impossible to get off (in my experience) without intending to.

I’m not a big jewelry person, but I’ve worn a Medic Alert bracelet for the past 27 years and my wrist has gotten used to it…it actually feels funny when I take it off. I like the Medic Alert brand because it’s highly recognized by medical professionals, and because I can have life-threatening conditions (of which I have several) listed on the bracelet itself, then all other medical conditions, medical devices, medications, emergency contacts, and doctor contact information on file that medical professionals can access by calling the hotline.

Thanks- that’s a great thread. This part is a little mind blowing-
“…a tattoo is not a valid identifier and almost no medical director would use it as a sufficient guideline for care. Only real medical alert bracelets … will be sufficient for covering our own bases.”
So a cheap piece of metal anyone can take on or off is more valid than a permanent tattoo under your skin. Wow.

I hope the BG meter in my pocket would be enough of a clue for any EMT’s who empty my pockets looking for an ID.

Hmmm, this guy has a blood glucose meter in his pocket… What do you think, Larry? Should we check his blood sugar?

I just think that tattoos in general are an abomination. These otherwise pretty young girls ruin themselves by having their arms and hands covered. And it makes the young guys look like criminals.

Now, you kids get off of my lawn!

So a cheap piece of metal anyone can take on or off is more valid than a permanent tattoo under your skin.

But those medical bracelets are so dang ugly, no one would wear one unless they absolutely had to.

I saw someone with KILLER tattooed across his chest. Obviously it meant nothing. At least I hope it didn’t. I didn’t exactly stop and chat …

Yeah, but I carry my meter and insulin in a hip sack. Unless they recognize the Xdrip watch face on my smartwatch or Dexcom G6 in my side they’d have no clue. I’m not so much worried about having a low blood sugar or other diabetes-related issue (I’ve never had one), but rather an accident where some treatment could precipitate a diabetes-related complication- say a glucose drip or something.

Do you have your medical id set up on your phone? I’m more familiar with how the medical id works on the iPhone but I’ve heard Android has the same capability. I’ve seen around the internet that at hospitals they sometimes look for the phone medical id.

I think that Medical ID bracelets are the most looked at by EMT/Paramedics in an emergency. I know that Diabetic alert tattoos are a thing, but I am not sure why anyone would want to be branded with their chronic illness. You don’t see people with other chronic illnesses getting tattoos identifying their illness (as far as I know).

Yeah, but I carry my meter and insulin in a hip sack. Unless they recognize the Xdrip watch face on my smartwatch or Dexcom G6 in my side they’d have no clue

Yes, of course. I understand. I was playing a bit.

That’s a great idea I hadn’t thought of. On Android you can add medical info to your lockscreen or you can use this app- https://play.google.com/store/apps/details?id=app.medicalid.free&hl=en_US
I’ll definitely give it a try.