Hi All,
I generally follow a LCHF way of eating, not very strict, about less than 50 g daily.

Occasionally, I would like to be able to add a small amount of sweetener to say, fresh squeezed lemonade. I was wondering what are your thoughts about the usual alternatives to brown sugar/honey/agave/maple syrup; such as Stevia, Splenda? Stevia is plant based and supposed to be “natural”. Splenda is a sucralose-based artificial sweetener.

Two years ago I purchased two large boxes of Stevia and Splenda bags, for us to use for testing purposes as a comparison.

After using about 1,000 of each, we finally settled on Splenda as our preferred sweetener:

We also noted that, for the specific brands we used, both bags were listed as having about 4 calories per bag, meaning that there is 0.8-0.9 carb in each bag. The sweetening agent is combined with dextrose or maltodextrin (sugar).

Clearly, this is based on our family preference, though. It could have ended up in the other direction.

Like Michel, when my son was diagnosed we went out and tried all of the artificial sweeteners on the market. Since we aren’t trying to stay as low carb as you, we ruled out using these because they didn’t taste as good as sugar. With your goal of <50g of carbs a day, you will likely want to venture into this world.

My advice would be to buy small amounts and try them. We found that some tasted really weird to us, and it depended on application, i.e. some were good baked, and other worked well in drinks, and it wasn’t universal. i.e. my wife thought some tasted fine, and I thought it was horrible.

Being a chemist, I don’t think the natural vs. artificial is any big deal. Splenda for instance starts with sucrose and adds three chlorine molecules which makes it really sweet and I am sure tricks the body into not processing it like sugar. Most things we consume started out as plant based molecules, and some we can make easier than harvesting the natural substance, so artificial vs. natural is not that important to me.

We’re not low carb, but even when we were experimenting with individual low-carb meals I found it was better to just reduce the amount of normal sugar in an ordinary recipe, or reduce portion size, rather than add artificial sweeteners. The kids didn’t loathe them but I couldn’t stomach the taste.

Maybe for those at 50 g per day, some mix of sugar and artificial sweetener would be acceptable, but I’m guessing it would take a lot of experimenting to find the right ratios.

Sorry about the late reply. I like liquid sucralose and use it anytime I don’t need bulk. Since there is no filler other than water, it is truly zero carb. For convenience on the road, I refill a tiny eye drop bottle and keep it in my meter kit.

For bulk in baking, I use erythritol.

Agree with @Michel here, Splenda is my choice. I tried Stevia in the raw over the past few weeks and just don’t like it very much.

@Chris Thanks for the information. I love stuff like this.

Here’s a link to a liquid sucralose that’s quite good. For those who enjoy Splenda, this is the same sweetener without the filler (maltodextrin). 1 drop = 2 teaspoons of sugar. I had dispensing issues with the Splenda brand squeeze bottle.

I guess I’m kind of the oddball here as I just really can’t stand the taste of artificial sweeteners. Over the years I’ve just cut out eating a lot of sweets.

Now if I want a sweet I just have the real thing and take enough insulin to cover it.

Like on Easter my wife made a cheesecake (with all the fat and sugar) and I had a piece. Covered it with enough insulin and didn’t spike.

And even if I had spiked, it would have been worth it

Not the oddball at all, that is exactly what we do. We tried the artificial sweeteners and didn’t like them. Sugar is fine in moderation and with proper bolusing. We now make our desserts with less sugar than we would have used without dia, and everyone is happy. My non-dia son really likes the taste of desserts made with less sugar, go figure.

I guess we are in the other school. Almost everything we do we use sweeteners for, and it is the rare case when sugar makes its way into a recipe. We do still use honey in small quantities for the taste.

Here’s a link for a “free” sample of EZ-Sweetz.

For us, we take low carb desserts and replace the artificial sweetener with sugar and get great results. This recipe for Nanaimo bars for instance: 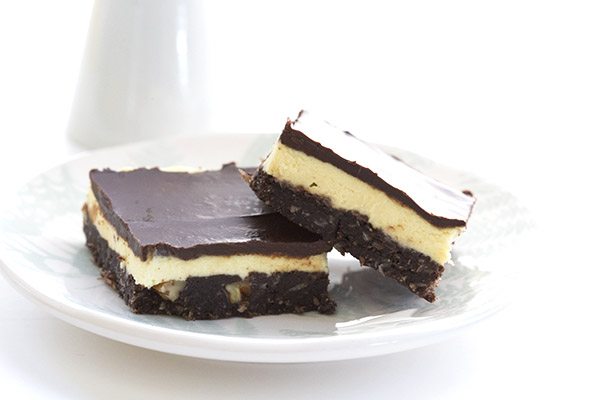 Nanaimo bars...oh how I love you. And what a joy it is to have created an authentic low carb nanaimo bar recipe that tastes just as good as the original. The famed Canadian dessert gets

Very tasty by the way, and much sought after following their creation.

I need (no, MUST have) a bit of sweetener in my morning coffee or I don’t feel human.

But I also don’t like the taste of powdered artificial sweeteners. After experimenting, I landed on Liquid Steevia. It’s has 0 carbs and is sweet enough that I only need one drop in a cup of coffee – and there is minimal aftertaste (your tastebuds may vary).

This is how I feel about tea…and why I switched to coffee. Unsweetened tea (other than green tea, which is not caffeinated) is just too sad for me

Hold onto your hats, folks… I use the pink or blue stuff! Yes, yes, I know I am embalming myself prematurely, but my stomach can’t handle the smallest amounts of Splenda, and Stevia didn’t do anything for me. This is just for my coffee, mind you, and I also use a combination of cashew milk and half & half. The way I see it… I have given up a lot of things for T1D but I refuse to not enjoy my

As for cheesecake and other yummies, if I have a little bit, I will just cover it with what I hope is enough insulin.