I think these will still be good 50 years from now.

Yep. Of course the doc was required to write the multiclix Lancet script to say use once per BG test. So I think I only filled for one 90 day supply X 6 tests per day. And I have plenty. My device will probably break or wear out before I run out of the lancets. And they don’t sell the device anymore.

And they don’t sell the device anymore.

Yeah, but there are a lot of people that like that one with the button on the side, so you could probably sell it on ebay and pay for your next 50 years of lancets.

And they don’t sell the device anymore.

The new device is called FastClix. I like the old one a bit better, but the new one has advantages too.

I liked the Fast Clix for changing lancets, but I much prefer the One Touch Delica in terms of how little blood it can draw. For us a small blood spot is a big difference.

I much prefer the One Touch Delica in terms of how little blood it can draw.

Have you tried dialing down the depth of travel?

WE do use the shallowest setting, but for whatever reason Samson finds this one less painful. I mean, it’s possible he may not even find it less painful (he complains it hurts but he’s not always reliable) but either way it bothers him less. Maybe the FastClix is just louder and more aggressive sounding?

I am one of those people that like the button on the side. 50+ years t1d, Carpal tunnel and trigger finger surgeries on both hands, and I need that button !
The fastclix is too skinny.

I recently got a soft-clix, which is smaller and no drum. But it has button on the side !!!

I might have one of those side buttons. With drums. All yours if you want it.

Are you talking about the Multiclix? If so I’d love to take it off your hands!

Sure. I only have one box of drums left though for it - 17 drums which is 102 lancets. And this might be a deal killer. It looks like the drums are expired. I don’t know if we have good test data from the R&D dept on expired lancet drums.

It looks like the drums are expired. I don’t know if we have good test data from the R&D dept on expired lancet drums.

If you are wondering about expired drums, let me issue a challenge to you. I don’t think you can find a place to store them for several years that would make them unusable.

If I gave you a brand new lancet drum, which expired 5 years from now, and let you choose where you would store it - 5 years in your garage, your basement, your attic - and you had to make it go bad by choosing the worst place to store it, I don’t think you could do it. Storing it in your oven is not allowed! Storing it in your saltwater aquarium is not allowed! Other than that, I don’t think you could make it go bad.

Storing it in your saltwater aquarium is not allowed!

Given the plastic components of the device, and where you live, the attic storage might be questionable.

Thanks for the offer, but I have a backup. At one time, the multiclix devices were included in box with meter, so I ended up with at least 2.

Until it freezes over for the winter.

I used a Multiclix for years and loved it. When I switched to the Fastclix recently, I found the lack of a button annoying. But I’ve since gotten used to it, and I actually like it better than the Multiclix now.

I have plenty of them!

OMG you are right I can’t use it-- NOT! These drums never die 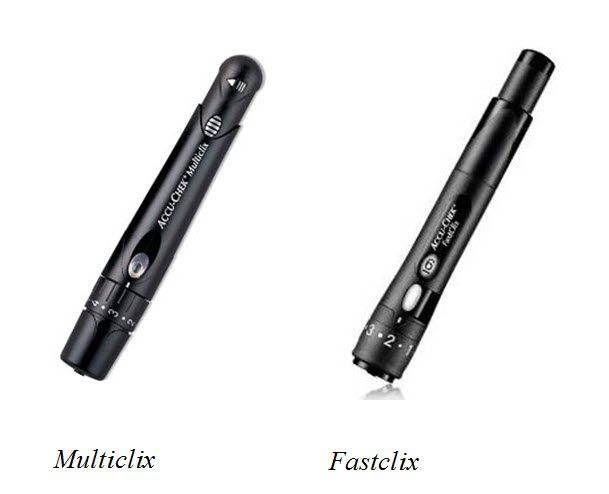 When using the Multiclix, you prime it by loading the spring before getting ready for the lancet punch, pushing with your thumb on the back. When you are ready, you release it with the release button on the side.

With the Fastclix, instead, you don’t prime it, but push the back button when you are ready to punch.

When they introduced the Fastclix, I thought it would be much more difficult to punch rather than release when in awkward positions – but I found out since that it is not such a big deal. Still, I have a slight preference for the Multiclix

Why I find both devices the best for all but toddlers:

All in all, my favorite lancet device(s)!