I know I am among the last to switch. Many have already posted. Still, I suppose one more opinion may be useful to someone.

It will be interesting to see if I have a problem with the adhesive, and how long the sensor lasts for me. Over the last 18 months, my G5 sensors have typically lasted exactly a week, when they used to last much longer. I’ll see if the G6 lasts as long as it should.

Thanks for posting your impressions Kaelan. Seems like so long ago that we switched. But in reality it couldn’t have been that long ago. Memory is a weird thing.

it couldn’t have been that long ago.

No I think we have been using the G6 for almost two years now.

I had tried it before for a few weeks last March. The no-calibration thing was ridiculous. When I did the code and did not calibrate, the numbers sucked. And if the thing doesn’t know it’s wrong, it isn’t gonna get any better.

So this time I have been calibrating the heck out of it early for each sensor. Every time it gave me a stupid number, I calibrated it twice to tell it to get its crap together. It has been much better with the frequent calibrations.

For both sensors I have used, after a few days of frequent calibrations it has straightened up and given me reasonable numbers for the rest of its time.

Anyway, the numbers have been fine after the initial few days of calibrations. I don’t mind calibrating. I test a lot, so that is not any problem for me.

On my 2nd insert, I bled like a stuck pig. Puddles on the floor. I had to replace that one!

Yeah, I didn’t hold out much hope for you since you had issues with the G5 as well. I don’t think my son has calibrated a G6 ever. It has been accurate enough for us. We did have one insert that bled through and had to be removed. That one was fun!

Yeah I suspect that your likelihood of the G6 working with no or rare calibrations is correlated to whether you could get by on skipping them with the G5. I rarely calibrated the G5 past the initial ones, since I learned I just didn’t need to. The G6 occasionally is a little off the first day, but it settles in on its own just fine for me, and the only time it took longer was actually when I did calibrate it, so I think if it usually works well for you, you may be best off letting it try to sort itself out.

I suspect, like the G5, it works better on people with a decent bit of subcutaneous fat, and that there remain other biochemical factors or tissue differences that affect all of this.

There is still a significant time lag. I don’t think that will ever change for me either. But I am happy that it has been better with calibrations. As long as that option remains, it is usable for me.

I may be the last of the Mohikans!!! We won’t be USING our 1st set of G6’s until probably mid-year next year…maybe later! lol. We’ll see. Just depends on how long my G5 Transmitters/Sensors hold out for us. I will be ordering the G6 stuff next shipment, though and building up the supply closet.

Thanks for the review! Hope Liam doesn’t have problems…most of the problems I’ve seen are in the young users. (Liams age and around there)

So this time I have been calibrating the heck out of it early for each sensor. Every time it gave me a stupid number, I calibrated it twice to tell it to get its crap together. It has been much better with the frequent calibrations.

I still do that with the G5 also…I call it rage calibrating. lol

Harold, do you want us to ship you our leftover G5 sensors?

I appreciate the offer Michel but I think we are mentally prepared to just make the transition. I do like that it “officially” doesn’t require calibrations so that’s a plus for us…I know we’ll still need to calibrate (perhaps rage calibrate as @Eric does, and as I do with the G5’s), but the benefit of no official calibrations means my Loop will work all the time. Currently, if a calibration in our G5 is needed, Loop doesn’t administer any microboluses…it just stops working. So while basal program will still be executed it won’t give more if needed, if a calibration is needed. Why this matters is that sometimes I forget to do a calibration before bed and then at 2 or 3AM he may end up going high if a calibration was needed, and not given, because the microbolus part of loop that would normally supress the highs doesn’t function when the calibration is required.

I suspect, like the G5, it works better on people with a decent bit of subcutaneous fat

I have always been surprised that the Dex works for Eric as he is so lean. Neither the G4 nor the G5 worked for me. I have such limited sub q body fat. Nothing in my tummy. Could not “pinch and inch” almost anywhere. And I even tried my tushy, without any success.

Now I have been on the FSLibre system from Abbott for the past 3 (?) years. I am liking it much more, but there is no option to calibrate, nor are there any alarms. It must be scanned to be read. A real downside for me bc I am totally hypo-unaware and can drop very fast without feeling it.

I am, however, waiting to begin the new FSLibre 2 System, which functions as a true CGM with alarms, etc. I am praying that it works for me. However, the system itself is usually not that reliably accurate. It tends to read either spot-on, or 10-20 points too low. So why do I bother? Well, it does give me a sense of how I am trending and thats been better than flying solo. (I have never once made a treatment decision based upon its reading, though)

Hi Kaelan,
I just got my 3 weeks left notice on my first g6 transmitter. I think I was on my second sensor 9/28 when my babies were born. I preferred the G5 for accuracy, reliability, and calibrations not messing it up but its not terrible. I’ve had to get replacements for 2 sensors that failed before 10 days and have more time of “missing data” than I did with the G5’s. Some of mine have been accurate on the no calibration and some haven’t at all and then they error out when I calibrate. I don’t like that they are tougher to restart and they don’t last much longer than the initial 10 days for me. I still try to restart almost every sensor if its not at a super inconvenient time so I can have a little bit of wiggle room stash.
Hope you are doing well!

I went from the G5 to the G6 about 6 months ago. Was forced to actually as I was on Medicare. I weigh only 125 lbs and .it works great for me very accurate. From the first day I got it and put it on sleep mode I have had an incredible night sleep. Was never like that with the G5. After fighting the transition I whole heartily endorse it.

It is interesting how individual bodies can respond so differently to difference sensors.

I initially used Medtronic sensors - both the older version and the newer Enlite ones.
They hated my body!!!
I had frequent communication/connection AND lots of calibration errors with most sensors. Getting the occasional sucess was a win!

I don’t know what Dexcom has done but I LOVE, LOVE, LOVE the G6. It’s accuracy and consistency has been life changing. At the beginning I kept a careful eye on my levels… Checking G6 readings against fingersticks regularly (not entering calibrations)…
But they have been so consistently accurate that I don’t bother with fingersticks at all anymore.

I hope that you get to this point Eric, possibly not until G7… But when it happens, it is like magic!!

I see these types of numbers enough to make me just accept that this is not ever something I will rely on. This just happened a little while ago.

No big deal - it beeped, I checked, I said “screw you” to the Dexcom and calibrated it.

(The time on the FreeStyle is still set for DST, so that one is an hour off. Yes, a month later I still haven’t changed the time on it. 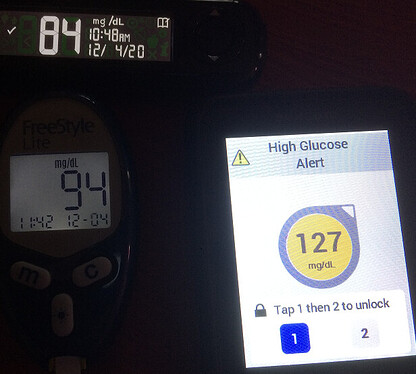 am, however, waiting to begin the new FSLibre 2 System, which functions as a true CGM with alarms, etc. I am praying that it works for me.

DM, I beginning think that’s the route I may need to go ‘cos the G6 is just not doing it for me. I am into Day 2 of this sensor and still need to calibrate due to horrible lags. I have probably used 25+ test strips since yesterday. FWIW, I am also on the lean side (though nowhere near as fit as some of our members).

Two great things about the FSLibre is that 1)warm-up period is only 1 hour
and 2) it is SOOOO easy to insert (nothing close to the ridiculous contraption of the Dexcom). Just a simple little plunger right into the back of your upper arm with very little rotations needed every 2 weeks.

One more thing that I enjoy is that from the first hour after insertion, it is pretty much calibrated. It doesn’t give you way out there wacky readings for the first 24 hours as the Dexcom did with me (and some others I have read about on FUD).

and although it is far from perfect with its accuracy, it is consistently inaccurate. meaning that if it runs 20 points Below finger stick BG, it will almost always run 20 points below finger stick BG for the entire 2 weeks( so you can just do the math and have a good ballpark idea of your BG.)

Best of luck. Also, the more hydrated with water you are, the more accurate the sensor works. (I can get complacent and disregard this info. Water, water, water)

Also, if you do run into an experience with a bad or even bloody sensor, if you find you must tear it off and put on a new one, the customer support team is excellent, and they replace your sensor within 3-5 days. (AND THEY APPOLOGIZE