Here is another strip holder idea to share. This one is very easy and requires no work.

I don’t like to carry around the big vials with strips. They don’t fit well in your pocket.

Here is an easy way to do it. Buy a pack of Listerine breath strips. 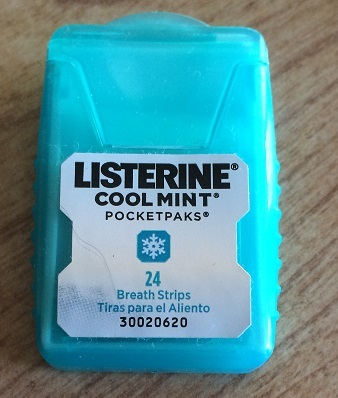 Take out the Listerine strips and clean the inside before using it.

It is a very compact way to carry strips in your pocket, or for an emergency stash of strips somewhere. You can easily fit 20 in there. 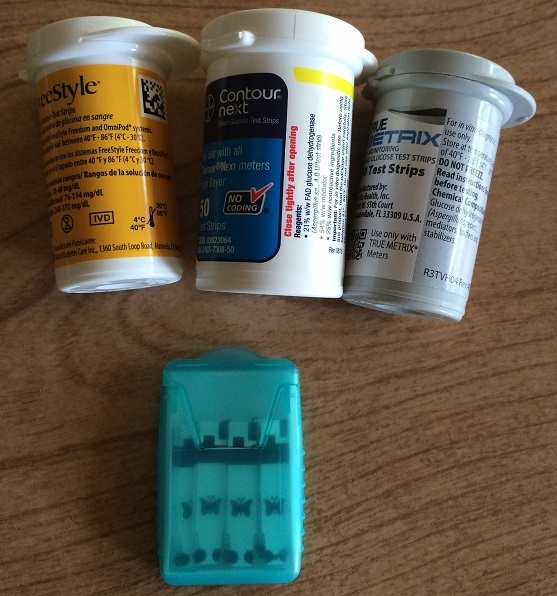 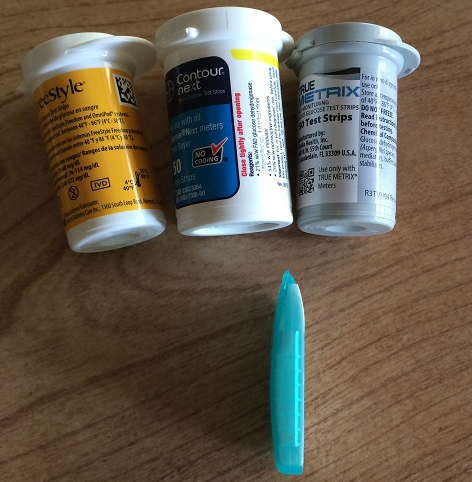 Told ya this one was easy!

@Eric What a great idea!

I’m telling you Eric, you need to write a book. By the way, is your last name MacGyver?

I keep a pack of Listerine strips in my meter case in the hope that they just might help cleanse dextrose from my teeth after treating a hypo. Any thoughts, @docslotnick?

Do you have a dental lab with a bunch of impression material, and an autoclave, and resins and stuff? Let’s make a pancreas or something.

@britt_j Actually just a rinse with water would be your best bet. What you’re trying to do after sugar exposure is to normalize pH in your mouth. Also the water will help wash away dissolved sugar in your mouth.

For forty years, I’ve been sending all of the teeth I extract to see if there are any beta cells on them I could use. Haven’t found any yet, but you never know.

I know the pancreas idea won’t work with your lab…

But I do think the acrylics and different types of resins you have in a dental lab would be great for building some cool stuff.

I was thinking about a one-at-a-time test strip dispenser. It would be small, and the mechanism would be similar to a Pez dispenser. When you activate the mechanism, one strip would be dispensed, kind of pushed forward. Perhaps there is a silicone or rubber type of material that could be used to grip the strip and push it out. And a spring would then press the next strip up into place.

Similar, but much much smaller. 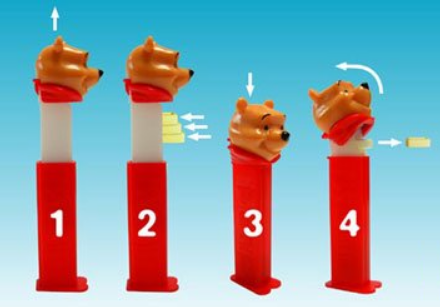 I love the idea of making a blood sugar test strip dispenser that is based on the mechanism of a candy dispenser.

Ok Eric. How about a pez dispenser that instead of pushing a strip out, engages it in the built in glucose meter ready for the blood drop. In the opposite end is the built in lancing device. A 3-4 inch self contained blood glucose meter.

For the design of it, I don’t like the idea of disposable test strip cartridges. There is one that is out there already that uses a cartridge. The problem with a disposable cartridge - what if you have only 3 strips left and are leaving the house? You have to bring a second cartridge with you. If it uses a cartridge, it must be refillable. I think that is important.

I remember the Bayer meter that used a disposable disk for ten tests. But if we could figure out how to assemble something smaller that could be reloaded like a firearm magazine that could be a winner. Except in California where a mag can only hold eight rounds😉

I bet @Sam could help us.

I tried the Bayer one. Cool idea, but too big and not being able to add strips to the magazine was a deal breaker.

Ok. Got the idea. A very small meter, like that Nipro one that fit on top of a can of strips. Mounted to the side is the mag full of strips. Push the mag down and it pushes a strip into the meter, stays cocked down to expose where the blood goes, and cocks the Lancet device at the same time. Draw the drop, test, remove the used strip, and push a release button to release the mag to its original position.

Any engineers around here?

Yes, that makes sense. A few challenges though.

On all the current BG meters, the strip insert and removal is along the same path. So leaving clearance to remove the used strip, and then insert a new one is tough. That’s why the Bayer people used a circular disk, which was ridiculously big.

In order to take one strip out of a container, it could be done in a similar manner as a bullet being loaded into the chamber of a gun, but since strips are so thin, there is very little room for error. The tolerance would be very small to make sure the strips come out only one-at-a-time, AND go into the slot of the meter.

But I am chatting with a man who sticks his hands into somebody’s mouth and fills something < 2mm, so I know this type of thing would be easy for you…

Do you want to show a sketch?

I’ll try a sketch, but I’m a lousy artist. I can draw a very good rendition of a tooth from any angle you choose, but straight lines are challenging.

There’s a good story with this (I know you’re groaning, but I’m an old man so I should be allowed to tell stories)
I went to dental school at USC 45 years ago, when it was arguably the best dental school in the world. Our freshman occlusion project was to carve every tooth individually out of a block of carnuba wax, according to specifications found in Linek’s Manual of Dental Anatomy. Tolerances were < .1mm in every dimension.

We carved 28 teeth, and our final project was to mount those teeth into clay rims and mount the rims on a fully adjustable dental articulator (Denar D4A). The teeth had to be in perfect occlusion in centric position and all excursive movements.

Our class did well. We only lost 6 students after that first year.

Ok brainiacs, here’s a (very) rough sketch of the idea. The buttons for activation have been left off, but I think the basic function should be apparent.

I think this is doable, but I don’t know how to do it. We can use the millions we make from this to finally find a cure 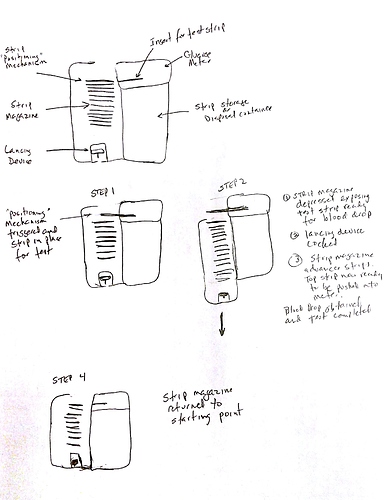 If anyone wants to give this a go with CAD I have a nice 3D printer for quick prototypes. Just saying…

What would you guys think about starting simple, just getting the strips to come out one-at-a-time, before progressing to having it go into a meter and have a lancing device?

I looked and found a bunch of patents, but of course you can’t buy one, which means nothing was commercially successful yet. 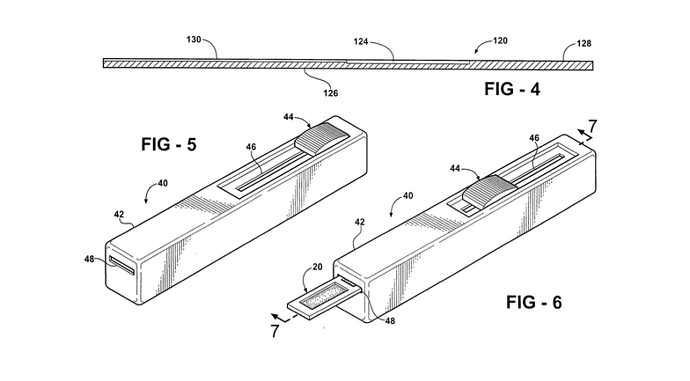 @Eric That’s a great idea to start on the dispensing device. The one you found that is the best is along the lines of what I was thinking for the contraption I conjured up.

My son said he will give it a try, the one issue we have found is the slot the strips come out is going to need to be pretty exacting since the onetouch strips we use are really small and stick together and clump.