I thought this lancing device looked cool. Very small, basically looked just like a pen. Made of metal. Adjustable lancing depth by just turning the gold ring up or down. Only $9.

I used it and it sucks! Don’t buy it.

The problem is that the lancet does not retract! After using it, the lancet needle is left exposed every time. You have to open it back up to push the lancet back in. What an idiotic design. An accident waiting to happen.

Fortunately I was able to return it and get a refund from Amazon. Save yourself the trouble. Don’t buy it! 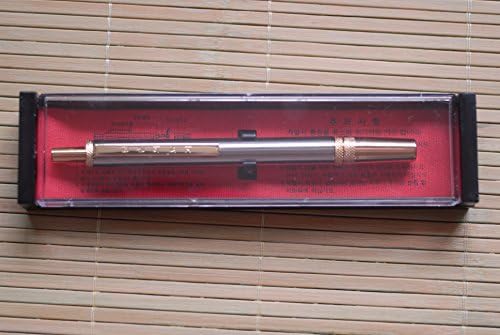 Thanks for the heads up, Gretel

Thanks for the heads up, Gretel

Michel edited the title for the vendor page and put the vendor name “Hansol” in.

I just re-edited it, because it did sound goofy with “Hansol” in front. Thanks!

If it worked, it’d be a nice device.

Thanks for sharing. I noticed it said lancets & acupuncture. What were they thinking?

I searched youtube and found the following not very helpful video:

I noticed they didn’t use it in the video!

From playing with it, I noticed that what happens is when it “retracts”, if the lancet is in your skin, the lancet is not held strongly enough by the device to pull it back in. So it is left stuck out, ready for an accidental jabbing.

Yes, hence, my descriptor of not very helpful video. They show how to load it, but not how it is used. What the heck?! Silly video. Accidental jabbing here they come!

This thread has made me laugh so hard!

This forum is the place to be educated AND entertained. :-).

Off topic, I was researching liposuction on behalf of a plastic surgeon friend many years ago. Oh my gosh, the history and the early experiences/experiments were horrifying, to say the least. What could they have been thinking subjecting themselves to liposuction?

Off topic, I was researching liposuction on behalf of a plastic surgeon friend many years ago. Oh my gosh, the history and the early experiences/experiments were horrifying

My experiences with it have been 100% positive

Are you pulling my legs again? I cannot imagine your needing liposuction. I was referring to the early history of liposuction. Initially, they did not hydrate the patients sufficiently. Needless to say, there were complications. Yikes.

Are you pulling my legs again?

He is pulling your leg

Can you write with it? Lol