It seems that I don’t get more than a year from these even though it is warranty is for 4 years. I’m betting this is by design so that there aren’t too many extra PDM’s floating around. This really sucks when you don’t have a backup and cannot get a backup. 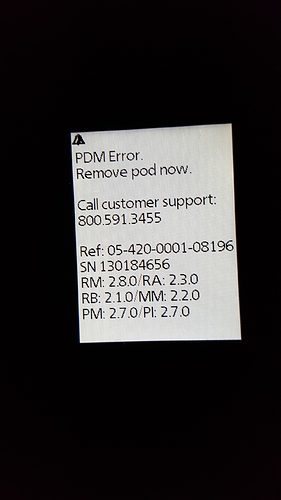 Wow I didn’t even know this was a thing! Thanks for sharing and sorry this has happened to you. So far ours is hanging tough since Sep 2016 :: knocks on wood ::

They replace and overnight the new one to you hopefully?

Yes, but a very long overnight when you have a 5 year old not accustomed to routine injections anymore…

Yeah, my thoughts exactly…now that we’re on the POD, I hope I even REMEMBER how to do MDI.

Hope you get the replacement soon!

24 posts were split to a new topic: Pump insulin: vials or pen cartridges?

Given that the PDMs are probably worth a hundred bucks, I would like to purchase a spare in case I have a failure. I have a spare meter, spare pens, spare pods, but only one PDM. BUT - they want to charge $6300! and overnight shipping is not an option when you are hiking in the mountains or traveling in another country.

It would be nice if Insulet shipped 2 x PDMs for the $6300 CDN my insurance company had to pay.

As a side note, my back-up is an insulin pen with cartridges that I carry with me along with my meter. Yes - I am weird and do not use the PDM meter (or the PDM bolus calculator).

I just order insulin in cartridges and use the cartridges to fill the pods. If I ever have a pod problem when I am on the go, I use a cartridge that I carry with me. The cartridge I carry will be the next cartridge I use to fill a POD. As a bonus it is at room temperature when I need it. 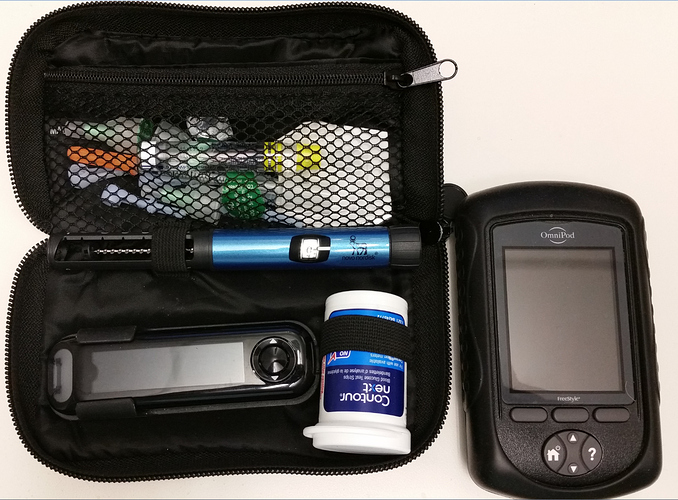 Given that the PDMs are probably worth a hundred bucks, I would like to purchase a spare in case I have a failure. I have a spare meter, spare pens, spare pods, but only one PDM. BUT - they want to charge $6300! and overnight shipping is not an option when you are hiking in the mountains or traveling in another country.

It would be nice if Insulet shipped 2 x PDMs for the $6300 CDN my insurance company had to pay.

@Aaron,
It has been shown by 2 brilliant minds in Canada and the U.S. that the Canadian and U.S. Pods work interchangeably with each other on Canadian and U.S PDM’s…
canadian-u-s-omnipod-swap-test

Now if only you could find a person in the U.S. who has your shipping address, and has a propensity to flaunt convention and would be willing to ship you a U.S PDM that he buys specifically for you for from Insulet for $300…

We’re on the phone with Tech Spt now. I was attempting to check Liam’s BG’s, I lost control of the PDM and it dropped (only a foot or two to the ground)…and I kind of caught it with my foot on the way down which softened the blow. When I picked it back up, it was in the process of resetting, then I received this exact error with a long alert.

Looks like they’re wanting us to do a reset on it atm. We’ll see how it goes.

So we were able to reset our PDM with a paperclip! We had to do the following:

And…for whatever reason, they said the bolus calcs in the PDM would not work for 4 - 6 hours so we’ll see what happens.

I lost control of the PDM and it dropped

Do you guys have a gelskin on it? That can help protect it a bit.

I do as well–although mine wasn’t dropped. It happened in the middle of the night while we were sleeping.

We also have had the PDM give the scream of death/scary error message and done the paper clip reset, a couple of times in 2 years. It has worked and we’ve never had to actually get the overnight replacement but it is unnerving. I keep an old pen (and backup script for cartridges) and lantus (which is expired but still on fridge and would work in a pinch). For backpacking we take old fashioned syringes and novolog.

I google searched for “reset failed Omnipod PDM” and came across this old thread as the first search result.

The paperclip trick on the PDM worked for me and I am now back in business with the PDM except for not being about to use the bolus calculator for 3 hours and 15 minutes.

Background - I woke up and did a bolus and walked away from the PDM. The bolus started but I guess the PDM did not get an acknowledge back. When I walked back in range of the PDM the pod went into scream of death mode and the PDM was stuck on an alarm screen.

I tired pulling the PDM batteries but it did not do anything as the PDM alarm kept going. To reset I opened the battery compartment on the PDM and stuck a paperclip in the little hole below the batteries and managed to reset the PDM.

Heh. Pretty nice the Google search gave you FUD right away. God forbid you’d have to use results from another forum

Wow. Another PDM error about 1 year 2 months later and google took my to this thread. This one happened about 1 hour after a PDM better change and I went to bolus.

I left the pod on all day but i can’t tell anymore if I am getting any basal so I will do the paperclip reset and chamge the pod.

Will call tech support about a new PDM too.

Is this anywhere near the expected lifespan of the internal battery? The only PDM failure I’ve ever had was because of the dying battery, after about a year and a half. Guess that makes me due for a failure this spring.

The only PDM failure I’ve ever had was because of the dying battery, after about a year and a half.

The internal battery on my PDM is no longer any good. It is not a problem for me, I just replace the batteries every few weeks when I am doing a pod change. It requires a clock reset, but that is the only issue.

I think that is preferable to having to get a new PDM and reprogramming everything, and losing all the history.

I just replace the batteries every few weeks when I am doing a pod change.

This is my problem - I forget and run the batteries right out and then end up changing with an active pod.

If I was better at changing the batteries when I change my pod I would not have any of these problems and would not have to worry about a dead internal battery.