Is it possible to replace an Omnipod PDM's Internal Battery (Eros system, not Dash)? If so, how?

I have been using an Omnipod Insulin pump for about 5 years, and in that time have gone through about 5 PDMs that work with Eros pods (the generation the predates the new Dash pods). What seems to cause them to fail each time is what tech support tells me is an “internal battery” problem. Essentially, the PDMs have an internal battery that keeps the settings if you remove the 2 AAA batteries from the PDM (necessary every week or so). If this internal battery wears out, anytime you remove these AAA batteries, the PDM will reset, and you will need to replace your active pod and reset your clock.

The advice I’ve gotten is to change your PDM batteries when changing your pod. This is alright if you remember to do it. However, a bigger problem is that dropping the PDM can sometimes cause a brief loss of power. This causes the PDM to reset and the error to happen. This is not sustainable and has caused failure after failure lately…

I have a new Dash PDM now, but it will not work with my supply of Eros pods, and my warranty is expired on my Eros PDM so that Omnipod will not replace it or fix the issue in any way. They suggest I buy a replacement PDM out of pocket. However, it seems to me that a better way to handle it would be to just replace the internal battery myself, assuming I can find one commercially available. Though, I have not found any advice on doing this on the internet. I’m sure it must be possible! I am a handy person, but I could use advice. Does anyone have any information about how to do this internal battery replacement?

Side note: if anyone has an Eros PDM they don’t need anymore, I could use it!

It’s a well known, documented, issue with the Eros PDM that the clock backup battery would fail causing it to lose time. In the past (when I used that PDM) tech support replaced the PDM with a newer model with a different internal battery design which seemed more reliable. I’ve never seen a problem with temporary battery disconnect, but then I only had a failed backup battery once. Replacing the batteries every pod change should be 100% reliable; in fact with a working backup I only had to replace every few months, in contrast with the Dash system where the batteries now don’t last longer than a day or so.

The Eros and Dash pods both have a block of cells internally that also have a limited shelf life, so the stock of Eros pods (I have one too) is likely not to be in a good state. Replacing those batteries is pretty much impossible because of the near impossibility of opening the case while retaining a functioning pod. Maybe some of the people who use loop systems (which require the Eros pods) have a way but I don’t know it.

As for the PDM, yes, it should be trivial - I assume you still have some of the failed PDMs (Insulet stopped asking me to send them back), so you can open the thing and it should be obvious. It is conceivable that they used a capacitor; that would be more difficult to see, but the fact of the failures suggest to me that they just used a button cell. Open an old one and take a look

Maybe some of the people who use loop systems (which require the Eros pods) have a way but I don’t know it.

I agree that replacing the 3 LR44 cells inside an EROS pod would be pretty much impossible. But the EROS pods I’ve been getting lately come with over a year before the expiration date, and likely there is some life beyond that.

When running LOOP software on the iPhone, that completely replaces the PDM, there is no PDM.involved at all.

@BrightSide I’m sure it can be done with the right tools and a way to put the case back together so that it will be secure. I found a paper by a Cambridge Engineering student that primarily focuses on the Pod. However the PDM was shown open, You can’t see the internal battery in the image. 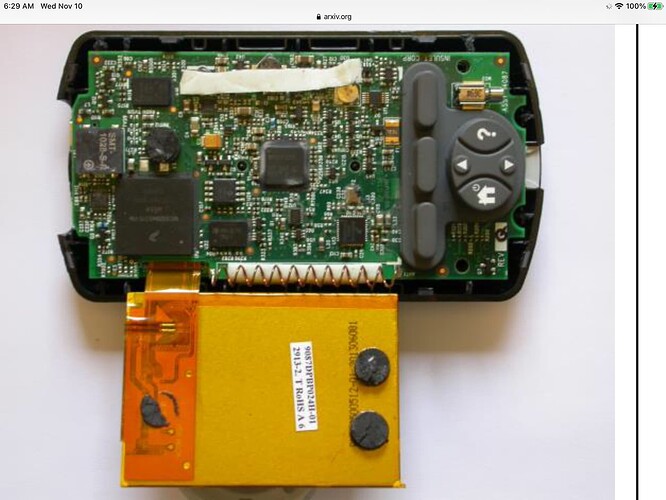 If you are interested the link to the paper is:

The easiest solution to this is to put 2 batteries at the top of each box of 10 pods that you have. When you open a new box of pods, the batteries sitting in there are a reminder to change them.

Just swap them out when you open the box and are about to put on the first pod from the box. If you change batteries every 10 pods, that’s roughly 1 month and should work fine for you.

Another solution is to just buy a new PDM for $200.

If you want to slice open your PDM, have at it. But it really is not necessary.

I found that paper as well! I wish he talked a little bit about the PDM battery. Seems like getting that orange tape in the right place with those wires would be important. Would also need to figure out if that battery is something you can buy off the shelf somewhere.

Yeah it bothered me as well. The thing is you can see the coin batteries in the pod. I was wondering if the memory backup battery is on the other side of the printed circuit board as well as the regular batteries.

Seems like getting that orange tape in the right place with those wires would be important.

There are two stacked PCBs. It took me two sharp blows with a 1" chisel to get the case open - it’s got plastic clips at the dimples and I broke a couple of them. The lower PCB has a hole for the battery compartment, the two halfs of the case come off trivially. I don’t think they’re using a battery for backup, I suspect it’s a capacitor. More later (tomorrow possibly) when I’ve got my photo gear set up.

Here are a couple of quick shots with my webcam: 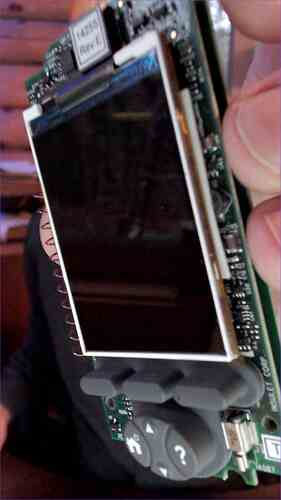 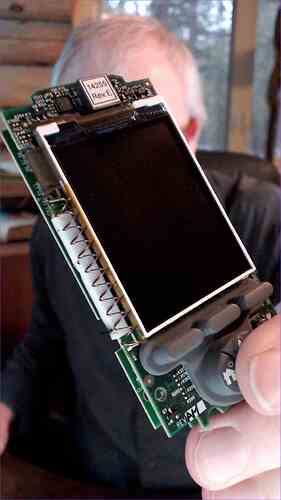 It is a battery, it’s on the top PCB so the LCD has to be rotated out (pulled off the sticky) to gain access: 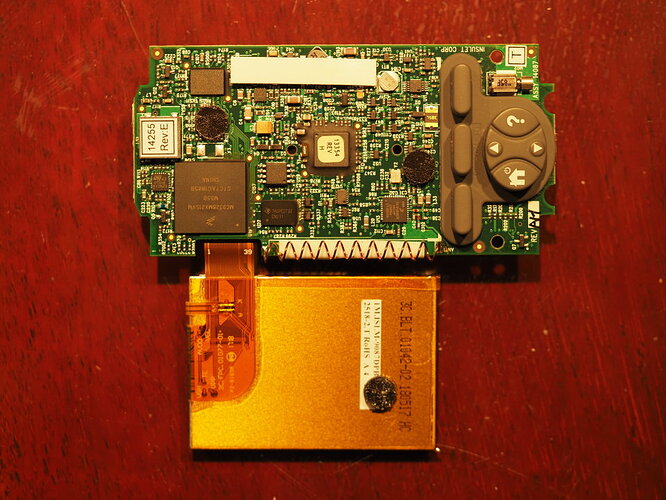 So that’s the same as Sergei’s view but the white sticky (it’s double sided foam tape) at the top is in better condition. The battery is immediately to the right of it. Here’s a zoom in: 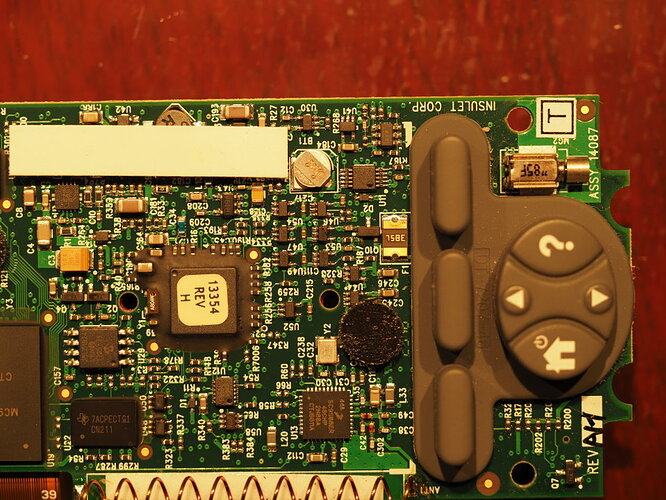 You can see “BT1” upside down above the battery, zoom some more and you will see what the problem is (I flipped the PCB round so the legends are upright): 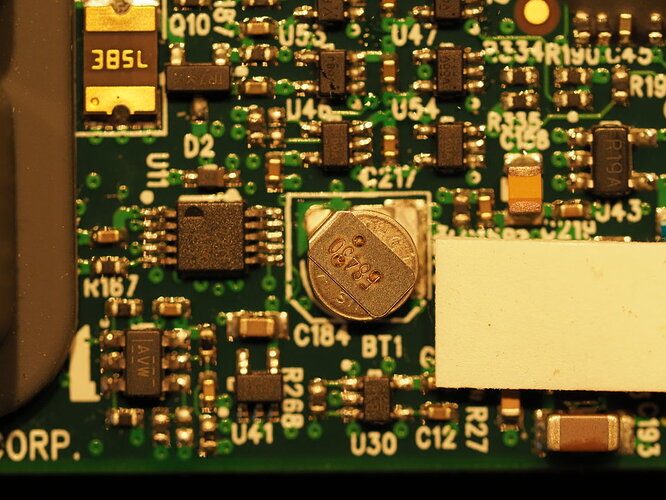 side view, just in case it isn’t clear: 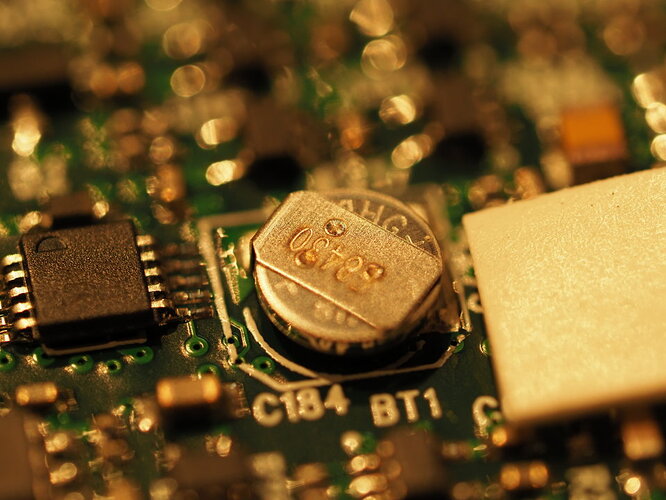 They spot welded it! AAARGH. It may be possible to remove the battery by de-soldering the nickel strip. I don’t think it is possible to spot weld on the bottom so the strip most likely just holds the battery down; cheaper than a proper holder. Bet they regret doing that.

It might also be possible to pry the battery up, bending the strip; I’m not going to try that because at this point I think I can still put it back together. Probably a time to consult all the YouTube videos of people who have one cog left over after repairing their watch, ifixit.com might help too - they make their money selling repair kits but they sell them because they strip down anything that passes within reach of their pliers. (Quite good kits too - the modern X-Acto).