Which part of this is the weird part? Barefoot, Maskless, Kilted Parrot Man

So I decided to take my family on a spur of the moment trip to the St. Louis Arch on Sunday. As in, I decided we should go at 10:30AM and we were on the road in 15 minutes. And it’s about four hours away…

Anyway. We get to the Arch. We’re walking around marveling at it and we see this guy. He’s not wearing a mask. He has a parrot on his arm. He’s stationed himself outside of the Visitor’s Center exit to harangue children and families to talk to him (and these parents were totally going for it and petting his bird and talking to him like he was Jack Hanna!). And then I notice he’s wearing a utilikilt. And then…I notice he’s barefoot.

So my boys were like, “Cool! Can we go see his parrot?”

And my husband was walking away from this guy in a huge arc and we’re following along…so he’s clearly seen this dude’s situation.

And I quietly tell my boys, “The guy is wearing a kilt, no mask, and no shoes. There’s something not right about his situation…and he may be a very nice person…but he is not someone we should be talking to.”

So I was talking to my husband later and asked him which part was “the weird part” in his opinion. He said, “Dude was wearing a skirt and an exotic bird. That’s the weird part. Super weird. Right?”

My thought as I saw this guy was, “Cool looking bird. Why is he approaching children with it? Where is his mask? That’s not cool. Oh, dude’s wearing a utilikilt. That’s interesting. Record Scratch No Shoes?? Who in the hell doesn’t wear shoes? I do not trust him now!”

So I voted that the lack of shoes was the No Go for me. Everything else I could chalk up to interesting eccentricity. But no shoes? That’s weird. Like people who take commercial airline flights in flip flops! Who does that? What is your survival plan if that plane goes down? Or if zombies show up? But I digress…

So…has the world gotten weirder while I’ve been in my COVID bunker? Or do things just strike me as weird since I’ve normalized to my own normal? And which part is the weird part, if any, in your opinion?

Is what I vote for. I can get past all the other choices (though cumulatively it’s tough). As an aside, I wonder if parrot guy is a relative of your balcony friend with his situation and all?

Sounds like a run of the mill thing to find in the PNW. Nothing you have described sounds weird. Weird huh? I raise you a Unipiper. 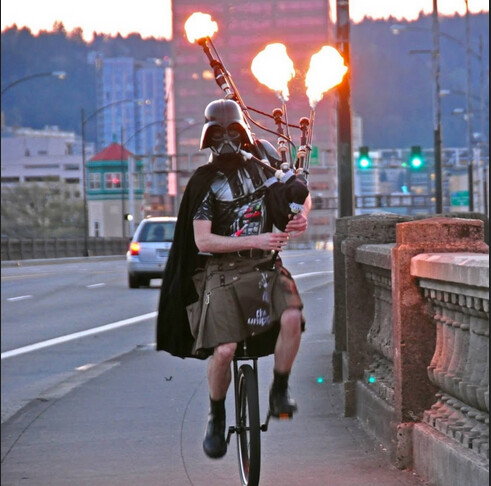 Now that you do mention it, the Unipiper is wearing shoes, so there is that.

I have a very good veteran friend who wears no shoes - ever. He lives in Texas and this past last month was the first time in more than a decade he had dawned a pair because he would have frozen to death otherwise in that fiasco that happened there (is it still even going on??) Anyway, super nice guy and part of the “poet society”…so I’d personally put no shoes into the kind of peace and love group of smart hippies. lol.

But the guy you describe checked so many strange boxes I would have kept totally clear of him, as would my kids. First of all…there is a PANDEMIC going on…that would be enough for us to steer clear, but even if there wasn’t a pandemic, unless he was playing an instrument or doing something cool with the bird like it’s doing tricks, yeah - no thanks! lol

Also, your story of St. Louis reminded me of the ONE TIME I went there…I was a contestent for a new reality show that never aired and didn’t ever go anywhere, but it was a very cool premise to it…it was called “sabotage”. Long story short, I made the last cut of finalist contestants and we had to go there and do a bunch of tests and one was a scavenger hunt in St. Louis including down by the arch and the river there on the bank. It was a creepy place down there tbh. I still have my “super secret badge” from the show. lol

Not wearing a mask outside here is standard (SW Oregon). Wearing a kilt always gets me comments, even the utility one that is my standard when I don’t want to feel sweaty. Yeah, I’m a tenderfoot too. I remember hiking in one of the county parks in the SF bay area and encountering a member of the local barefoot walking club: It was one of those, “I want to [be able] to do that” moments. I still can’t; I can’t get to my barn from my house without pain. I don’t need to wear anything else, just shoes, but I have enormous respect for anyone who can.

the Unipiper is wearing shoes, so there is that

The Unipiper might be wearing shoes, but those are some serious flames coming from those pipes. He must be playing AC\DC or similar…

He might be, he is a pretty good bagpiper and a good unicycle’r and he likes beer. So all in all a great person.

@Chris, are you the unipiper? Is this shameless self-promotion?? Inquiring minds want to know!

@Chris, are you the unipiper

He’s hiding behind the Darth Vader helmet to protect his family, lol

I was a contestent for a new reality show

By the way, why are we just now hearing about this??

Never came up. I had long forgotten… My fun in St. louis was around 2006. Until I saw the pic of your sons at the arch it was gone from my memory. So many memories lost to old age. Lol

So…has the world gotten weirder while I’ve been in my COVID bunker?

No, not at all. Everything is perfectly normal. 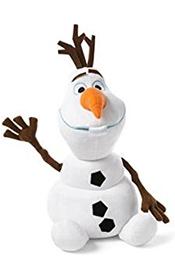 MARCH 8--A judge today ordered a psychological evaluation to help determine the competency of a Florida Man charged with having sexual contact with a pair of large stuffed animals at a Target store,

(maybe not safe for work viewing…)

(or actually any viewing at all, anywhere…)

Oh my, I am glad they retired those stuffed animals.

No Shoes?? Who in the hell doesn’t wear shoes? I do not trust him now!”

So I voted that the lack of shoes was the No Go for me. Everything else I could chalk up to interesting eccentricity. But no shoes? That’s weird.

I wonder if he was barefoot though. Apparently that is the big show-stopper for @T1Allison.

Banging stuffed animals? So what?

As long as he’s wearing shoes.

Haha! Welcome to San Francisco on any normal Tuesday. Although I guess ours are “masked, but naked and wearing a ridiculous fruit-covered hat!” We do have people who carry parrots around, cats on leashes, and all manner of ridiculous pets everywhere.

About 6 years ago, my underactive thyroid (Hashimoto’s) went the other way and went full Graves disease. Before I could get it diagnosed, one of the symptoms I had was, that everytime I put shoes on, I overheated. I have barely worn shoes since.

Granted, I live in the subtropics, and I am about 5 minutes away from the east coast of Australia, so it’s much easier to “get away” with it in regards to people’s perceptions, but I actually prefer no shoes.

In fact, the last time I wore shoes I ended up with a massive blister that got infected, so I think it’s actually safer for me to not wear shoes.

But do you have a Parrot on your arm while walking?

@Chris, not recently! I don’t own a kilt either…

Ok I can’t stand it anymore. A kilt with a parrot would definitely get you noticed in Middle Tennessee. Sounds like a pervert with a parrot to attract children, things can get indecent really fast when one is wearing a kilt. Perhaps I’m too protective.

No shoes in March! Doesn’t this dude know that you don’t go barefoot till the month of May at least not in Tennessee.

@Chris, not recently! I don’t own a kilt either…

A kilt is a worthwhile investment; a working kilt, not one of those Scottish things that are designed to protect you against the cold (not, I suspect, a significant worry). Kilts are tool belts with added protection; they allow you to hang, or stuff, stuff around your hips while ensuring that said stuff doesn’t injure you. Cargo pants just don’t rate (not that I am saying they don’t have merit, when it is necessary to get down on one’s knees.)