To anyone with Type One and Omnipod

I wear the Pod, Omnipod. I have for years but never had anyone to go to where I live, other then my type two dad, but hes type two.

I have found highs and lows, but wanted to see if anyone else was out there.

If you change your pod before bed but it fails the next morning, would you toss it, or salvage the insulin for the new pod?

How far can you take your pod, like exercising, sleeping.

I have had my fare share of gushers, sore/redness, lumps. But I also have my good times, where it will last all the days, and be great for weeks, but this brings me to my next one,

Like I mentioned on that other site, I have pulled insulin out of the pod before. But I don’t inject it back into the vial. I want the vial to say sterile. I would just get rid of the air bubbles and put it into the new pod. And then get a syringe and put whatever more I need into the new pod before starting it. But this doesn’t happen much. I wouldn’t pull insulin more than a day or two old, just because at that point, there isn’t much left in the pod anyway, and it just isn’t worth it.

I have only lost a few pods from exercise, but not too much. They generally last the 3 days they are supposed to.

When I have lost them, it happens to be that I will also lose my Dexcom sensor on the same run. To me that’s the sign of a good run - losing both a pod and a sensor.

So I don’t blame the pod.

I wear them as many different places as I can to avoid over-using a spot. Not just stomach, but up higher on my chest, back, butt, hips, arms. Not just back of the arms, but inside and also forearms. Just all over the place. Make it a goal to put it somewhere you never have before.

Generally I try to avoid my legs, because the pod would get abused a bit, shaken all around.

Yes, yes, I have your case in my head still, but a question with the filling the pod, can you fill the pod twice like that, I thought you could only fill it once because it beeps at you when you do it?

And yeah I mainly lose my pods because the site doesn’t last long, I need to be more adventurous with where I place it, just nervous to I guess.

Yes, yes, I have your case in my head still, but a question with the filling the pod, can you fill the pod twice like that, I thought you could only fill it once because it beeps at you when you do it?

Oh yeah I knew what you meant with that, I just though you meant

Old pod / insulin, you took the insulin out, you put it in the new pod, but added more newer insulin on top of that.

So you just make a new pod with just the old insulin then?

lol, Am I confusing you yet, sorry.

Yeah What @Chris said, maybe I mistook how you worded it, makes it sound like you fill a new pod twice.

She means that when you fill the pod you get the beeps, and so can you add insulin twice when filling a pod? or must it be done in one shot.

lol, Am I confusing you yet, sorry.

yep, I am confused.

So for example, say I wanted to fill it with 140 units. If I was only able to get about 100 units from the old pod, I would then get another 40 from my vial.

The pod beeps only to let you know it has the minimum amount (80 units). You can keep adding to it, up until you hit the button that starts the priming process. Once you start the priming, you can’t add anymore.

But before priming, you can add more insulin (for up to an hour), with no problem. In fact, you can put insulin into a new pod even before you deactivate the old pod! You can keep putting the needle in and out as much as you want, the pod doesn’t care.

But the timer starts counting once you start filling. You only have one hour to activate it at that point.

Is that what you were asking about?

I never knew that, yes, that clears it up, thank you so much!

If you change your pod before bed but it fails the next morning, would you toss it, or salvage the insulin for the new pod?

Like @Eric, we have extracted the insulin before (actually, I think it was based on Erics and others thoughts on the matter), but we no longer do it because we have so much insulin as it is and I’m not going badly, financially speaking…so we just discard the pods with insulin still inside. If the time comes when we’re struggling, I’ll probably start extracting it again and using/saving it. The way I did it was I’d extract it and, put it into an empty vial, then extract a bit more from the new insulin vial and mix them, then extract that insulin from the old vial and put it into the POD. That way there was enough to “hear the beep.” We only have to fill to the point of hearing the beep since he’s so small and requires so little insulin. We discontinued, as I said, extracting for error pods, though because we’ve just got a surplus of insulin in storage.

How do you wear you pod?

For Liam, we have 6 main sites where we put the pod and we swap directions (cannula facing up toward his head one week, and down to his feet the next week.) We have a notebook where we keep track of where it currently is so that we know the next rotation site.

We use the following positions:

I’ve attached two screenshots of the logs we keep. I track when we swap out Insulin vials (marked with an “I” in the left margin.) When we swap out CGM sensors (markes with a “C” in the left margin, and when we change out the PODs (marked with a “P” in the margins.) It helps me locate the information quicker, those marks on the left side. I also add an “E” to any pod that errors out so that I have records of how many error pods we’ve gotten. The “E” also helps @ErinElizabeth (my wife) when she calls in the PODs for replacement.

We haven’t used Liam’s abdomen yet because his layers of skin aren’t so thick there and he was born with an umbilical hernia so that area isn’t really a place that’s conducive for anything right now…but as he grows and his skin thickens and stretches out we’ll use that area also. 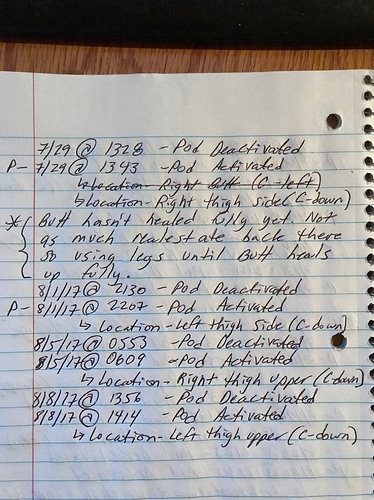 I have had my fare share of gushers, sore/redness, lumps.

This may or may not be applicable to you, but it’s worth checking out if you haven’t already. Liam used to get really big red bumps on his legs from the PODs and I figured out that it was created from the small drops that remain on that “insertion hole” from filling it. After you pull the syringe out, one or two drops stay there on that hole. After we started splotching that area with a clean cotton ball after filling the PODs each time, the lumps disappeared. That insulin was causing a reaction to his skin.

Not just stomach, but up higher on my chest, back, butt, hips, arms

I tend to keep my pods on the back/butt/hips above my belt so far - I tried the side of my butt but it did not work too well - Ot was comfortable bit I got an occlusion. Any tips on going below the belt line with the pods?

For your chest - where do put them? I saw the cross country ski guy do the chest near the armpit and was thinking about giving that a try. For me everywhere else is skin and bones only.

I’ve done below rib cage, above pecs, and on pecs.

Interesting - I’m a pump newbie (I’ve been using an Omnipod for 3 weeks) and haven’t given much thought to choosing a POD site based on whether it is above or below the belt line. Am I missing something here?

For me so far the sites that have been the most comfortable have been thighs/hips. The one time I placed on my abdomen I didn’t like it at all.

I am using my arms and will cover with a GrifGrip when our 1-year-old grandson is here this week!

Am I missing something here?

No - I am about 6 months on the omnipod and I just have not been able to find a place that works yet below my abdomen. I am also a bit chicken to try. I do not have a lot of fat on my legs (thighs) and when I last tried below my hip it didn’t work well (occluded). Since I tried on my legs I started to pinch-up the skin while apllying pressure to the cannula end of the pod. This trick has generally helped so maybe it will work on my leg.

am using my arms and will cover with a GrifGrip when our 1-year-old grandson is here this week!

A couple of nights ago I was using my arm and picked my son up just after a bolus. I had used skintac for the first time on that pod and it was stuck on well. As the bolus was delivering he was toying with the pod (not too hard) and then I heard the whine of death

Whatever he did managed to trigger the occlusion alarm.

I pinch up on my arm, too, and use the front not the (recommended) back of the arm (which also doesn’t work to well for sensors, either).