I currently use the 670g and have had pretty great success with the auto mode. However the Guardian sensor which I have found to be accurate is such an annoyance with calibrations and alarms. I’m thinking of switching to the T:Slim X2 with the G6 sensor. The lack of calabrations and finger sticks is intriguing. As is the ability to upgrade without having to buy a new device. Does anyone have any feedback? Should I make the switch?

I’ve made the switch along with many others in my group, and we all seem to be having the same experience on the t:slim. I couldn’t be happier with it and have never regretted making the jump. I have yet to hear anyone else speak of a different experience. If you have any questions in specific, let me know. I’d be happy to share what I’ve got.

Thanks Nicky. Do you find yourself in range as much with the Tslim? My real concern is it’s not closed loop which has helped me tremendously. I know they are moving towards a closed loop approval but not there yet (as I understand it).

The closed loop (Control-IQ) approval is expected this month.

Just with the Basal IQ, my son’s control with the Dexcom and Tslim has been amazing. I only expect things to get a little better with Control-IQ. Basal IQ is really really helpful.

To add a bit more info on why Basal IQ is helpful. This is somewhat like the algorithm MDT has to suspend insulin delivery when you are going low, but the way that Tandem has implemented the algorithm really helps stop rebound highs as well as allowing you to get more aggressive than would otherwise be possible. This is because when Basal IQ predicts you are going low it suspends insulin delivery, but then when your blood sugar increases it starts the delivery again until it predicts you are going low again, because of this my son will hit 80 and just bounce along with very little effort, much better than before when he would go on a roller coaster ride when treating a low. Also, you can use an extended bolus when you want to get very aggressive, but then it gets cancelled when you go low. Good stuff. Paired with a very accurate CGM (G6) it works really well with very little effort for us.

My real concern is it’s not closed loop which has helped me tremendously. I know they are moving towards a closed loop approval but not there yet (as I understand it).

As @Chris said, we’re there with Control-IQ. I assume there should be word on its availability any day now, and initial reports seem to be pretty darn good.

As far as being in range, I have fared way better on the t:slim than I did on the 670G. I noted you said that you’ve had good success in auto, so in that regard, we’re very different. Auto mode was a disaster for me, and even Manual Mode, with its long suspends, was not particularly helpful. The t:slim currently offers Basal-IQ which is comparable to Manual Mode with predictive suspends—only it’s far more reliable. It’s a strong algorithm alongside an equally strong sensor, and I found the results to be both phenomenal, and even more important, a relief. It’s an extraordinarily low maintenance system. So this might be where our ideals converge again despite us having had different experiences with Auto. We both agree that the Guardian is a needy CGM, and I can tell you, from my year with the t:slim and G6, this combination is everything but that. It genuinely feels like what it’s doing is helpful—and I don’t need to spend my time catering to it so as to put it into a position where it can help. In fact, I don’t have to think about what it’s doing very much at all.

Now if they can come up with something for my diabetes like that… where I don’t have to think about what it’s doing. That would be cool. I suppose that could be called a “cure” though.

Following up with what @Chris and @Nickyghaleb posted.

This version of the Control-IQ algorithm which is currently pending FDA approval (still expected for approval before the end of the year) is not the final Control-IQ product.

Tandem has publicly stated intention for a yearly upgrade of the Control-IQ algorithm which would be remotely downloaded and installed. They plan to continue improving and adding enhancements to the algorithm.

The Tandem approach is yearly iterative releases rather than waiting and doing a massive release every four years.

I very much prefer this approach (yearly iterative releases) as it allows course corrections based on real world usage.

I used the 670g with automode and the guardian sensors, and I’ve made the switch to the x2 with dexcom g6 sensors. I can totally understand how annoying the Guardian sensors and their alarms are… it felt like I had to babysit this whiny brat. But it sounds like automode is working for you? And that’s wonderful if it’s helping you acheive your management goals. It sounds like it really helps some people out and for others is a complete disaster… I fell in the bin of complete disaster.

I’m super happy that I’ve switched. I totally agree with what @Nickyghaleb was saying in that the T:slim x2 feels super low maintenance compared to the 670g! And for me, that’s huge to not have such a mental (and emotional!) burden from my pump and cgm system.

But I do think it’s a totally personal decision, and it’s definitely worth it to at least research other options if you’re not super in love with whatever system you’re using. I know there are a bunch of threads here on FUD if you search “670g” if you want to read up on lots of random opinions on it!

Sorry, this is a longwinded way of me saying that I’m also here if you have any questions!

We used 670G for over a year, but without Guardian sensor because it doesn’t have analog of ‘Follow’ app which could be critical for parents . Ironically it just had a two day outage, but we used Dexcom sensors for 3 years and this is a first time we have observed outage on such a scale.

So I can’t really comment on 670g closed loop firsthand, form I have read in multiple forums, those sensors are really brittle.
Switched to T-slim couple weeks back.

There is one thing where 670g is definitely better imho - cartridge setup process. T-Slim is a little old school and it takes more time.
Touch screen is nice, but sometimes you have to press a little hard. Sometimes it goes to screensaver before I can enter all the data. Menu is great in some places, not so great in others

Other than that T-Slim seems to be great, but mostly due to G6 sensor which is better than G5 . No finger-picks, seems to be working almost all the time.
It is probably best CGM on the market by the mile (I know about recent ‘Follow feature’ outage, but it didn’t really affect T-Slim work itself - T-Slim kept receiving data and acting upon them just fine.

Basal-IQ is pretty solid , it substantially reduced number ultra-lows.
But please be realistic, it is still not a panacea.you can only correct this much by disabling basal. If you really overshoot with a bolus it wont save you. As other said it also typically doesn’t result in after-highs.
If 670g is kinda working for you , My advise would be to stick with 670G and wait for Control-IQ (closed loop). It is expected by the end of the year, but there is no guarantee.

Just to piggyback on everyone else’s comments - I have been using the Tandem Tslim now for 2 years and added basal-iq last year along with the G6. Mostly it works great. I have had some problems with G6 sensors but those are getting worked out I think. These guys (Dexcom and Tandem) are making some big changes in diabetes treatment, they have very good customer service (most of the time), and I would recommend them. Both companies are growing and scaling rapidly, so there are occasional issues, but it’s a very nice system.

The Tandem t:slim X2 has a unique method for insulin delivery. This is the reason why the cartridge change is substantially different from more traditional pumps.

I do think it is interesting to see how it works.

Here is a short 42 second video which is produced by Tandem and gives a quick explanation.

That’s a pretty ingenious system! How does the bolus delivery speed of the T:Slim compare to other pumps?

How does the bolus delivery speed of the T:Slim compare to other pumps?

The Tandem delivery speed varies based on the bolus size!

Here is a comparison with other pumps. 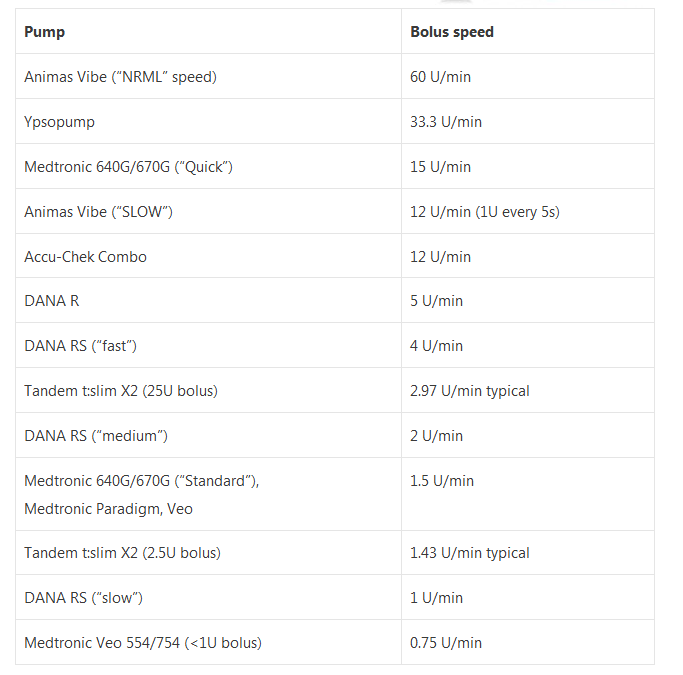 And not listed is the OmniPod, which is ~ 1.33 units per minute. The same speed no matter the amount.

The Tandem delivery speed varies based on the bolus size!

Why is this? Seems rather over engineered…

Does the tandem pump have a permanent rechargeable battery? Or is it replaceable? The charging battery seems sketchy.

The Tandem uses an internal lithium polymer battery. It is rechargeable.

Generally after a full charge it will last 4-7 days with normal use. But that can vary depending on how often you use it.

It can be charged from a normal USB port. You can also use a portable recharging device if you are away from home or away from power.

Does the tandem pump have a permanent rechargeable battery? Or is it replaceable? The charging battery seems sketchy.

Reality is it is a bigger PITA keeping your cellphone charged. Whatever system you use for your cellphone allows the pump to easily be charged as well.

That’s a pretty ingenious system!
How does the bolus delivery speed of the T:Slim compare to other pumps?

But like most things you get used to the way the X2 cartridge changes work.

The X2 Bolus is quite a bit slower than the Animas. The Animas is the only other pump I am familiar with.

I find a slower Bolus to be more effective for us. Particular for a larger than typical Bolus. For anything 5+ units, I would typically extend that over 20 or 30 minutes.

I just keep the charger in the bathroom and charge it while I shower. 10 minutes tops of the battery so I’m rarely below 85%.

I’ve finally settled on keeping my cable in the car and just making sure I plug in as soon I sit down. I’m in the car pretty much every day so between short drives (where I pick up 5-10%) and long ones (where I fill it up), I’m completely covered. I also carry a portable charger just in case, but this system is working out well. For now.

I have no problems charging my pump and yet find my phone is, as always, at 20%. Having problems with keeping your phone charged does not seem to translate.