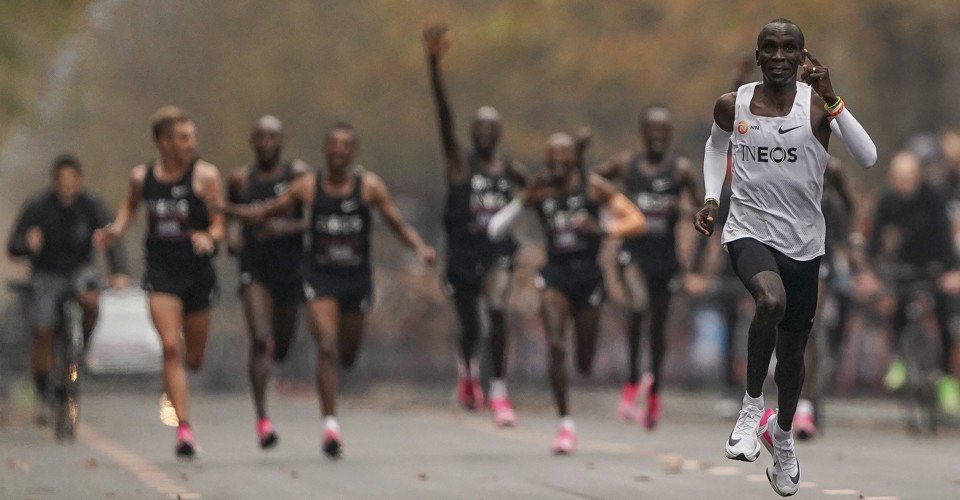 History’s best marathoner has broken a mythical time barrier. But it doesn’t count as a world record.

So were you one of the choreographed pacesetters for this guy, @Eric? I like that they had a reverse Mighty Ducks formation in front of this dude to reduce wind resistance for him. Seems like an idea you might have engineered…

What he did is phenomenal. Eliud is a beast. He was the only one that was close the last time they tried this in 2017.

(Last time in 2017 it was Nike’s promo instead of this year’s sponsor Ineos. When Nike did it, the Vaporfly was the big thing that came out of it. It paid off well for Nike, despite Eliud missing it by 26 seconds.)

Yes, there were a lot of things they did. Like moving water cart that he could pick up from and not have to slow down. And the drafting (which happens in racing anyway, but is not choreographed). And the pace car.

But he ran 26.2 faster than anyone else has before. So I do not think there is any reason to detract from his accomplishment.

I hereby volunteer as an incognito in-race supporter for FUDders for wind deflection/pacesetting/support for lancets-meters-insulin-carbs-etc. I’m pretty sure I could blend right in with a semi truck wind scoop mounted on my head or somewhere…and I’d just randomly stab you guys and test for you. This could be a whole thing.

Maybe if I ran or biked in front of you in a Halloween flying squirrel costume…would that get enough air out of your way?

@Nickyghaleb, @Eric, I got your backs.

You are the Rocky to my Bullwinkle.

I hereby volunteer as an incognito in-race supporter for FUDders for wind deflection/pacesetting/support for lancets-meters-insulin-carbs-etc.

Like a double? Or a stuntwoman? What is it called when someone stands in while the runner is hanging out at the medic tent? Pinch hitter?

and I’d just randomly stab you guys and test for you. This could be a whole thing.

I actually agree this could be fun. It would freak out the other runners. And maybe the cops. But I would do this with you.

But I would not run downwind of you. Not a chance. Even in a squirrel outfit.

and I’d just randomly stab you guys and test for you.

So there’s a lot to explain here…I still have the squirrel costume but I sold the dirt bike. Squirrel head was altered to fit over my helmet so I’ll have to sew it back up first…