Some info on milk spikes

Just a little bit of info for a topic @daisymae has mentioned a few times.

Lactose is a form of sugar found in milk. It is a disaccharide. Disaccharides are sugars made of two units of different forms of sugar. Lactose is formed from one molecule of glucose plus one of galactose.

(Another example of a disaccharide is table sugar (sucrose) which is made of fructose and glucose).

When consumed, lactose is broken into glucose and galactose. Galactose is a simple sugar. It is one of three monosaccharides (the simplest form of a sugar) found naturally in foods (the other two being glucose and fructose).

An enzyme in the small intestine called lactase breaks lactose into glucose and galactose.

Generally, lactose will not cause as fast a spike as things like glucose, fructose, or sucrose. There are no catabolic pathways that metabolize galactose directly, so the body will convert galactose into a something it can use, a metabolite of glucose.

Galactose is converted into glucose 6-phosphate in four steps. This takes a little bit longer, but ultimately you get the BG rise from it, just like you can from any of the other simple sugars. 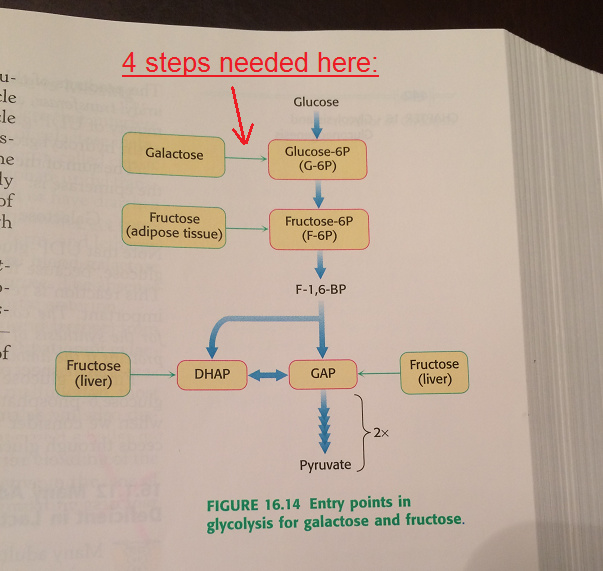 If you are still reading this, maybe you are thinking, “Why does all of this matter?!?!?”

DaisyMae has mentioned a number of times how milk and yogurt products spike her.

So I am detailing all of this to give reference why those things spike her.

Anyway, there ya go, DM. The science behind your milk and yogurt spikes.

i find this very interesting. but i am wondering about the fact that i use Lactaid Milk, but am able to eat things like cottage cheese, regular cheese, cream and 1/2 and 1/2, and old fashioned whole milk yogurt (not the GREEK kind) without much trouble. so my question is:

why some dairy products, but not others??? seems weird to me, thats all.

Correct me if I’m wrong, @Eric, but since Lactaid milk has enzymes added specifically to break down the lactose for you (for those who are lactose intolerant), does that mean drinking Lactaid milk is even worse than regular milk, because the sugar is already broken down to its easiest (and thus quickest) to digest form?

does that mean drinking Lactaid milk is even worse than regular milk, because the sugar is already broken down to its easiest (and thus quickest) to digest form?

yes; i would like to know the answer to this as well, since i drink Lactaid milk. maybe thats been my problem all along. (of course, this would not explain my problems with Greek yogurt) but, maybe i should be drinking regular milk and not the Lactaid? (i am NOT, btw, lactose intolerant, i just prefer the flavor of the Lactaid milk…maybe b/c it is sweeter

why some dairy products, but not others??? seems weird to me, thats all.

Not all dairy products have the same amount of lactose.

Remember, the sugar component in milk is lactose.

Less lactose means less glucose and galactose results from it.

(side note - when you eat malted milk balls, you are getting maltose, another type of sugar! It is also a disaccharide )

More than you wanted to know, right?

More than you wanted to know, right?

definitely not. exactly what i wanted to know. i would love to know, though, what the hell is in Greek yogurt that messes me up so much. why can i eat regular yogurt, but not the Greek kind? I LOVE Greek yogurt !

Correct me if I’m wrong, @Eric, but since Lactaid milk has enzymes added specifically to break down the lactose for you (for those who are lactose intolerant), does that mean drinking Lactaid milk is even worse than regular milk, because the sugar is already broken down to its easiest (and thus quickest) to digest form?

In lactaid milk they add lactase.

If you are not lactose intolerant, you already have the enzyme, so the fact they put more of the enzyme in the milk doesn’t matter so much.

Well lets look at the differences:

So when you are eating greek yogurt it is less simple sugars, more protein (which is why I think it messes you up) and if you serve from a communal container I bet you serve yourself a bigger portion than if you were doing it with regular yogurt.

Forgot the fat, greek yogurt has triple the fat as regular yogurt.

So you have lots of fat and protein, which in combo are tough to deal with, ala pizza

Also just to add this, I am not saying any of this for people to think milk is bad.

Milk has so many important things in it, such as specific proteins and amino acids, calcium, vitamin D, B vitamins, potassium.

There is a reason all mammals start their lives on a milk diet! Milk is great!

Don’t buy into the “milk is bad for you” stuff. If you are able to drink milk as far as lactose tolerance, then you should drink it!

That makes sense. I am lactose intolerant, so for me this is good to know!

So you have lots of fat and protein, which in combo are tough to deal with, ala pizza

i once experimented with Greek yogurt doing a dual bolus of 50% up front and 50% over 2 hours; i experienced no spike or crash, just a nice flat line. but who the hell wants to do a 2 hour dual bolus just to have 1 glass of milk? its just easier to not drink the milk…unless of course if you are doing a dual bolus anyway for your meal.

make sense to anybody?

Maybe I’ll go back to using milk. I really liked it because it isn’t so sweet as other treatments. I get so tired of sweet low treatments. Glucose tabs make me gag!

I wonder just how slow 2% milk is? Sounds like an experiment needs to be performed, pretty easy with bg monitors and cgms

I really liked it because it isn’t so sweet as other treatments. I get so tired of sweet low treatments. Glucose tabs make me gag!

It’s inherently dangerous to use lactose for low blood sugar because we lose the capability to process it over time; we are born with that capability because it is in our mother’s milk, but if we stop drinking it we lose the capability. I suspect there might be some genetic variations that stop this happening but most older people who still have the capability (“are not lactose intolerant”, but that is a misleading double negative) have regularly drunk milk (maybe in small amounts) all their life. So:

Now I don’t have milk at all.

Tread carefully. The easy test is to drink a cup without a bolus when you are flatlining and watch what happens to your BG.

There are some other problems. It is a disaccharide as @Eric pointed out, it has to be broken down to get the glucose bit out. Lactase is produced in the small intestine. So the milk has to get there before any glucose is released. That’s a problem if there is anything in your stomach.

However here’s a potentially very informative piece of research in the NIHM, here. Slightly easier to read the abstract here.

It is a really old paper, 1976; I had only been a diabetic 5 years, but the abstract has these points (quoted verbatim, from the abstract), annotation by me:

1. Certain sugars were transported across the buccal mucosa by a carrier-mediated mechanism.

2. The metabolic loss of sugars from the mouth in a 5 min test period was negligible.

I.e. not much, that doesn’t mean it won’t help in the low blood sugar moment; I would guess they put a candy pop in the test subjects’ mouths.

Tricky chemistry: “d-glucose” is commonly referred to as Dextrose and it is what is in glucose tablets, e.g. the ones Walgreens sells. L-glucose isn’t found much, to quote that wikipedia article, " l - Glucose does not occur naturally in higher living organisms".

4. The absorption of d-glucose, galactose and 3- O -methyl-d-glucose was at least partly dependent on the presence of sodium ions in the luminal fluid. 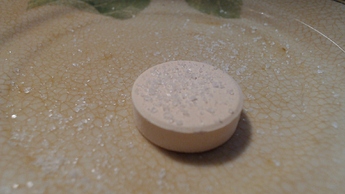 5. The transport of d-glucose was inhibited by galactose and 3- O -methyl-d-glucose, suggesting at least one common carrier system.

That one is really weird. galactose is one of the monosaccharides (along with d-glucose) that make up lactose. I don’t know what to think about that.

Me too. That was the only choice my mother gave me when I was growing up. That said, what about my perfectly plated tablet? Almost makes me want to eat it.

Bottom line, did the milk work for you?

Not all lows are the same. Maybe you can use it for a slow or small drop, but shouldn’t use it for a larger and faster drop.

I use different things, depending on the circumstances.

The black and white picture painted by healthcare professionals is irritating.

Use whatever works at the time, depending on the drop - big, small, fast, slow.

Yes, milk worked for me. However, this was all before CGM and my typical treatment was milk. Worked great, but who knows how high it sent me. My guess now is too high. Back then (not so long ago), pre-CGM, my favorite breakfast was dry cereal and milk. I love cereal, not sugary cereal, but different kinds mixed together. I could eat it for any meal. But again, it sends me sky high, something I didn’t know back then. One of my goals is to be able to figure out how to eat cereal and milk again, but I haven’t attempted that experiment yet.
As for the CDE, that’s why I love this forum. I learn so much more here, and I learn how to try to manage real life. The CDE would never say “unlimited.”

One of my goals is to be able to figure out how to eat cereal and milk again, but I haven’t attempted that experiment yet.

I know FUD could help you work through it. It’s just timing and amount.

Feel free to share your attempts and results. There is a wealth of knowledge and experience here to help you figure it out.