I just watched a couple of great YouTube’s from Loop and Learn on Omnipod 5. I’ve never used loop and these were still super helpful. For example they cover some common misconceptions, when it is beneficial to do a reset, and a bit on the algorithms max basal. Plus much more. I’m thinking of trying more resets in the future.

The first is Loop vs Omnipod 5 Panel Discussion

The second is Loop vs. O5 Chat Questions Answered

Both were terrific. Sorry I don’t know how to link to a you tube. I just took screenshots. 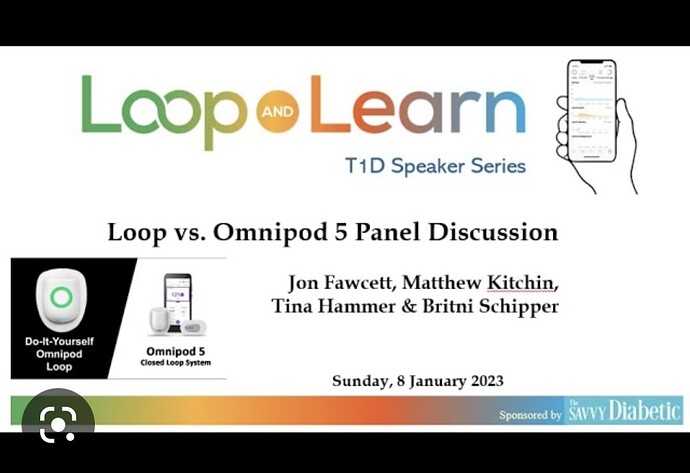 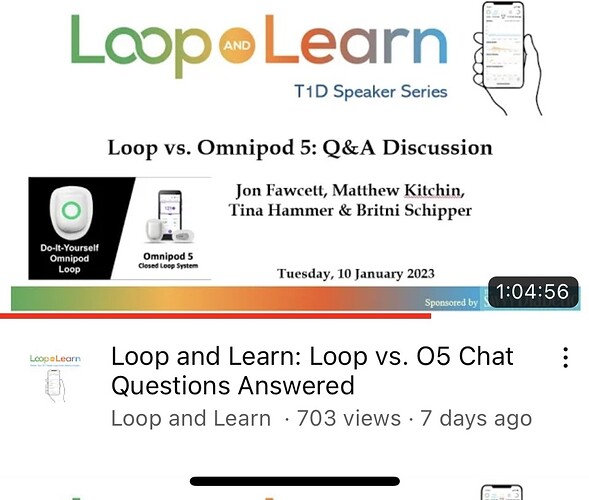 I watched this video, the whole thing. And the follow-up Q&A video - the whole thing. And there was a lot of good info. The four people leading the discussion all have children on the OP5, some are teens and some are quite young. The takeaway was the system works and they are pleased enough to stay with it. But (and this might not be a popular response) pay close attention to the summary slides each panelist displayed at the beginning of the video. It clearly shows their children’s blood glucose averages and SD are much higher than many of us would consider ideal. Maybe there are different standards for kids and young adults? I could see how that would be reasonable, actually. But I really felt the enthusiasm for the OP5 didn’t speak to an adult who likes tight control. I’d like to see a panel discussing how adults use it to get great control. I’m on an OP5 and have been for a couple of months. It’s too soon to give my overall opinion.

@mremmers There’s a podcast at JuiceBox where one of the nurse types that was involved with the O5 study talks about they learned during the testing as well as how to best use the O5. That may be more of what you’re looking for. I don’t recall the number, but if you to the JuiceBox website, I think it’s labeled as one of Scott Benner’s “Pro Tip” series and covered 2-3 sessions as I recall. Just go to the site (https://www.juiceboxpodcast.com) and do a search for Omnipod 5, it should come up. You can skip thru a lot of advertisement stuff and get to the meat of the presentation.

Yeah, those are episodes 736, 737 and 738. They are great and are the reason I decided to give the OmniPod 5 a try. I believe I missed a whole lot of the initial chaos because of info from these podcasts.

Ya a adult discussion with those getting above average results would be terrific! I feel that we are few and far between in general let alone for the new OP5. I was thinking about trying Loop but seeing these folks slides showing that they get slightly better TIR from OP5 with MUCH less effort has changed my mind.

I never thought to do a reset and give OP5 a higher TDD when I know I’m going to need much more insulin. I think this is going to be awesome for those times. I’m hoping it will prevent waking up for corrections.

I’m generally very happy coming from Dash with this system with the exception that I’m sleeping around 120 and 130 ish a lot of nights. My time in range(70 to 180) has been 96% and average bg 129 for the last few months on it. I eat around 130 carbs daily. Is this better than I was doing with a manual Dash - No. But I feel safer at night and when I spike after a meal it almost always brings me down to 100 or so by the time it’s ready to eat a meal again. I’ve always been too afraid of stacking to do this myself and OP5 has tricked me into it lol.

I’m having a hell of a time not jumping ship on auto mode. I do better in manual mode so, like, why? My numbers in auto aren’t horrible because I’ve been in manual mode for 7 weeks already. Only two pods in on auto mode but Omni knows my TID. But it still wants to keep me about 20 points higher than I like to be. I awake at 130 and I was 130 all night. So, not horrible, but I’m not sure I want to give up a 100-110 for 125-135. My endo thinks I’m a control freak and has asked I stay in auto for 3 weeks just so she can see how it behaves. I’m thinking about it.

It sounds like we have endos who are a lot alike lol. Im sure my endo and CDE think im a control freak. Im not in other aspects of my life but I find with insulin it requires us to be a bit controlling to succeed.

Hang in there on the overnight BG…in my experience that is the part that Om 5 gets right. If your goal is 110 and “correct above” is set at 110 I would give it 1 or 2 more pods to dial itself in. Once the Auto mode dials in at 110 overnight you will be impressed at the consistent flatline.

As far as Auto mode vs Manual, I don’t see anything wrong with switching to Manual for meals, especially since that is the only way to use Extended Bolus. I regret spending so many months stubbornly on Auto mode 100% of the time. It turns out that Auto mode can not replicate an Extended bolus and (at least for me and my diet) that is a very impactful part of my bolus timing.

That’s good advice, @John58. Here is my morning, in auto. I don’t want to jinx it by saying more. 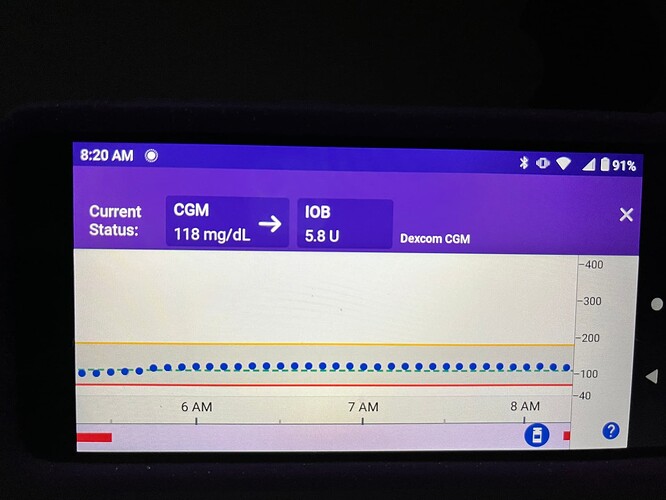 The takeaway was the system works and they are pleased enough to stay with it. But (and this might not be a popular response) pay close attention to the summary slides each panelist displayed at the beginning of the video. It clearly shows their children’s blood glucose averages and SD are much higher than many of us would consider ideal.

This may not be a popular response, but I think part of the point of the O5 is that it brings AID to the masses. I’ve battled through the AndroidAPS setup and the AndroidAPS exam because I had not endo and no access to the O5 but now, have done all that work, I’m not going back.

In this respect I just repeated what you said. But I’ve been a hacker almost all my life; I started doing T1 in 1972 and I started hacking in 1976, though we didn’t call it that then. I’m capable but I’m also cynical.

So I would never expect another person to do what I’ve done with AndroidAPS for me. I have no right, even though in the past people have down such things for me to help with my T1. This means that I expect and hope that the medical community will embrace the O5 because it is AID for those who cannot do it themselves. That doesn’t just mean people who can’t hack, it also means people who won’t hack (I wouldn’t hack MDI) and, in this context, carers who need a real rest.

I agree w you!

I am so glad you pointed that out! I am someone who chooses to work with my diabetes and manage it to the best of my ability and enjoy type control. That actually makes me feel good. And I’m two months in on the Omnipod five and wonder as well if it is just for the masses. I spoke to a rep who wanted to emphasize that it’s algorithm is about preventing lows, not stopping highs. and I do think that makes for a much better sleep quality, but at what price for a time and range and standard deviation? I thank you so much for your comments because I feel like I’ve found a home here. So many other sites don’t seem open to thoughtful consideration of alternate views and appreciate only those who drink -the Kool-aid.

Gosh! I feel just like you! The OP five has me waking in the 130s and sometimes 140s and I do not understand why it will not do better. I make multiple corrections before going to sleep hoping that if I get it down to 119 it could carry on and do the rest through the night. No such luck at this point. I miss MDI and waking up between 100 and 120. But I don’t miss the occasion of waking to alarms and having to eat some glucose. But I did it and it feels good to start your day at 100 or even 120. It feels depressing to start at 144. But many times my pod is failing and it’s past the 2 day mark. Also can’t get it to give me more basal to get me more level. I’m having to make corrections throughout the day and had hoped not to. On the positive side, when I went hiking last weekend, I was able to just eat a kind bar and a nugo bar and bolus for it on my phone and not eat a regular meal and all was well. But I don’t hike every day and I’m not out and about walking around for so many hours in a day. Anyway I look forward to reading more comments about the OP5. I’m sort of glad I’m not the only one feeling like that. And I didn’t want to be perceived as a pig who wants to have great numbers, but because I do manager, I do want to earn and get my results and realize there are some days you can’t do anything anyway but by and large they successful with the protocols I adopt. Thank you for being out there!