Should Glucagon be refrigerated?

I noticed that, on several recent PM threads I was invited to, some people mentioned the improved longevity of glucagon when refrigerated.

The documentation provided by Lilly for the latest version of Glucagon does not indicate that. In fact, it specifically requests that it not be refrigerated. Lilly provides a good documentation page for Glucagon, which mentions storage in the FAQs:

Of course, their controlled temperature range (68° to 77°F) is almost impossible to keep when outdoors…

The GlucaGen® package may be stored up to 24 months at controlled room temperature 20° to 25° C (68° to 77° F) prior to reconstitution. Do not freeze. Keep in the original package to protect from light. GlucaGen® should not be used after the expiry date on the vials

The Dutch package insert says the same as this British package leaflet:

It depends on the brand I guess. My glucagon kit is from Novo Nordisk and the package insert says that it should be protected against light and stored in a refrigerator (2 to 8 Celsius). Or at room temperature (below 25 C) for a maximum of 18 months.

My glucagon kit is from Novo Nordisk and the package insert says that it should be protected against light and stored in a refrigerator (2 to 8 Celsius).

I am so surprised – I had no idea that Glucagon could be made by another manufacturer. I will have to revise the info on the thread and title then.

What is the brand name on your kit: Glucagon? Glucagen? Something else?

Well once it’s mixed, refrigeration will typically slow the process of fibril formation, which is what makes it degrade. So if you’re not using it in an emergency situation, but as mini-glucagon, my understanding is that it should be refrigerated. That’s an off-label use though, so it wouldn’t show up in the instructions.

It links to this patient information document: http://www.novo-pi.com/glucagenhypokit.pdf, which says:

The GlucaGen® package may be stored up to 24 months at controlled room temperature 20° to 25° C (68° to 77° F) prior to reconstitution. Do not freeze. Keep in the original package to protect from light. GlucaGen® should not be used after the expiry date on the vials

So it seems that the English and the Dutch instructions for Glucagen kit are different – so weird!

How long does your insert say it will last in the fridge?

As a point - the NovoNordisk kits are nice and they come in the hard plastic case. The Lilly ones are from another era (they haven’t changed in 30 years) with their large glass syringes.

I prefer the NovoNordisk ones myself (not that I actually use it).

The Lilly ones are from another era (they haven’t changed in 30 years) with their large glass syringes.

@Aaron, did you mean these below? 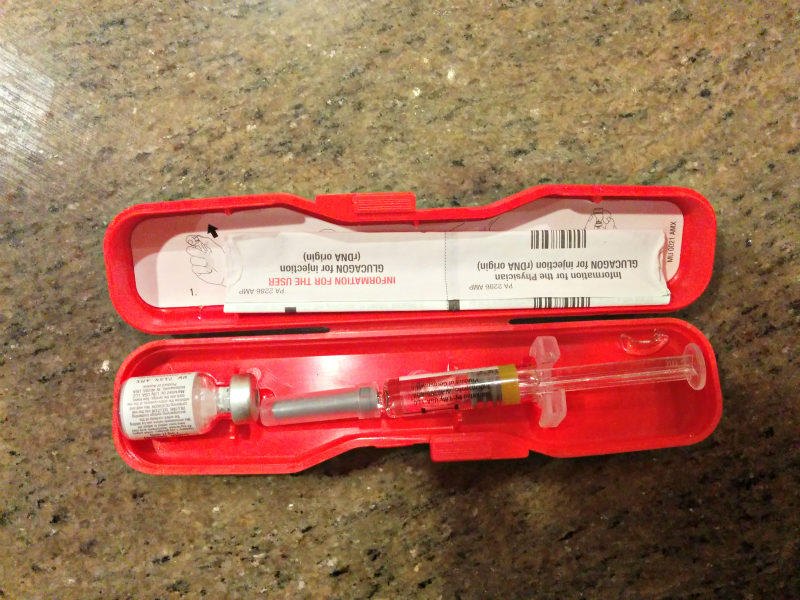 I did not realize they were that old. Are these possibly more modern?

Do they secretly make two types of HypoKits, refrigerable and non-refrigerable?
The Dutch package insert says the same as this British package leaflet:

This is interesting too, the Summary of Product Characteristics:

Prior to reconstitution, the shelf life of the product is 36 months.

Now I wonder why my pharmacy often gives me HypoKits with a shelf life less than 12 - 16 months.

And about storage it says:

Hey!!! - Those are new and much better than the old ones

I have not bought Lilly glucagon for about 2 years. At that time it came in a large cardboad box (like below) and the needle was from the dark ages. It was a glass syringe and the needle was probably 4" long and had an 18 gauge needle (I may be exaggerating but the needles were huge compared to any insulin syringe I have used.) 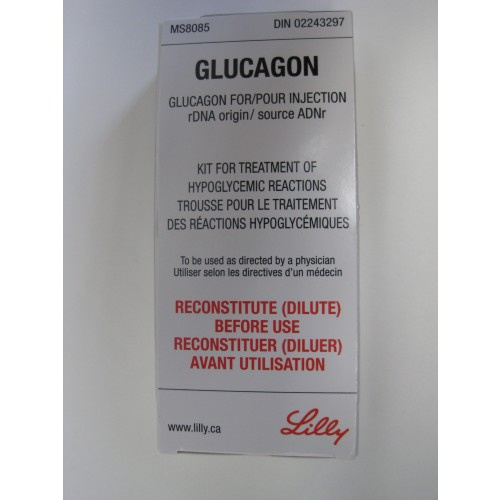 I switched to the NovoNordisk kits because they came in the nice hard plastic case and had a smaller needle and have not bought a Lilly kit since.

I have used glucagon once - I had bolused for dinner and then ate dinner and then I threw everything up (sorry for being disgusting) and could not keep juice down. I sent my wife out to the pharmacy to pick up some glucagon (I didn’t have any) and then had to give it with the giant needle. I have had glucagon in the house ever since (ok - ever since the second time I had to send her out for glucagon after a post meal issue but hey - I have learned now

I actually read mine and, even though there was conversation about refrigerating it, mine specifically said that it should be refrigerated, so I keep it room temp.

mine specifically said that it should be refrigerated

The Dutch package insert says the same as this British package leaflet:

@Boerenkool, based on your info, I am now suspecting that, since both Glucagen and Glucagon are actually glucagon, it is likely that:

I am wondering why Glucagon actually recommends that it not be refrigerated. I suspect it may be because, if people put it in the fridge, it is not available immediately (wherever you go). So it is due to a usage issue rather than a physical/ chemical issue.

Sorry, should NOT be. My apologies.

The Lilly glucagon cases are not new: we just don’t have them in Canada, for some inexplicable reason. Here’s a Flickr photo of a Lilly glucagon kit from 2008.

I was so glad when I was prescribed a Novo glucagon kit and got the case! The cardboard package of the Lilly one would just crush as soon as you put it in a bag. It made it impossible to actually carry glucagon anywhere.

(Sort of unrelated but related: in the US EpiPens come with this nice plastic clip that lets you easily clip two together, which we also don’t have in Canada. Luckily I managed to obtain one, and it makes keeping the two autoinjectors together in my bag so much easier!)

As to whether to store it in the refrigerator, I do. The Canadian Novo kit I has says to store in a refrigerator (between 2°C and 8°C) and that it can be stored at up to 25°C for up to 18 months within the shelf life.

The Lilly ones are from another era (they haven’t changed in 30 years) with their large glass syringes.

Glass syringes are preferable when the diluent is stored in the syringe for several years. The plastic syringe is what you do NOT want for storage!

Actually, the syringes from Novo Nordisk are made of glass as well.

Vial made of glass type I, Ph. Eur., closed with a bromobutyl stopper and covered with an aluminium cap.

Vial made of glass type I, Ph. Eur., closed with a bromobutyl disc with teflon and covered with an aluminium cap

pre-filled syringe made of glass type I, Ph. Eur., with plunger (bromobutyl rubber) and needle.

I had no idea either and I can’t find any European documentation concerning Lilly glucagon kits. Novo seems to have a monopoly on glucagon in Europe. In other languages (German, French, Italian) I can only find information about the Novo kits and the storage advice is the same as the previously mentioned Dutch and British instructions.

Actually, the syringes from Novo Nordisk are made of glass as well.

I have never used that one. Makes sense they would use glass.

The old ones used to have two vials - one with the diluent and one with the glucagon tablet. You had to take it out of the one vial before injecting it into the other to mix it. I guess they started pre-loading the syringe to save time.