I booked a trip to Europe for the end of April, and I’m planning to travel through a series of cities. I’m hoping you’ll share your favorite things and gush over your favorite memories! I’d really love to hear your favorite foods or places to eat too. I’ll be spending 2-3 days in Paris, 3-4 days in Amsterdam, and only 1-2 days in the others.

Thanks for your advice!

If you are hungry in Amsterdam give one of the good Rijsttafel (rice table) restaurants a try. We did one with a heat progression, and the last few plates were amazingly hot. Really tasty and fun. Since the dishes are served individually, you can avoid the rice easily if you want to keep the carbs down.

Oh my! This sounds so cool! Especially with the heat progression. I love spicy food. Thanks for the recommendation!

How exciting! Congrats! What types of things do you enjoy doing? How will you be getting around?

Out of curiosity, why The Hague and Rotterdam?

I’ve got a couple of suggestions for other adorable albeit kitschy towns in the Netherlands if you’re taking public transit (yay trains!) and want to see some smaller towns. If you’re interested I’ll figure out what they are.

Close to Rotterdam is Delft, smaller and cozy and only 13 minutes away by train. I stayed at the Hotel de Emauspoort and it was excellent! I would consider staying there as a jumping off point for Rotterdam. 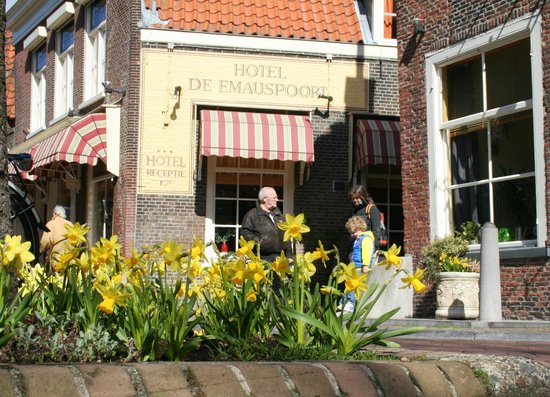 . I’d love to tour buildings with unique and/or beautiful architecture. I want to see the Louvre in Paris and the Van Gogh museum in Amsterdam, but I would also love recommendations for smaller museums that you loved on your trip. Really, I’m interested in almost everything. I’m still in the early stages of planning.

I really love trying new foods! When I travel, I tend to plan 1 or 2 things per day and then spend the rest of the day wandering around and enjoying new and interesting foods. Or referencing a back-up list of things to do if needed. Planning too much can make a trip stressful.

I’ll be travelling most of the trip with my friend that lives in the UK, but I’ll have a couple days to myself too. We’ll be using public transportation exclusively.

I’d really like to get a feel for the culture in the three Dutch cities because I’ve considered moving to the Netherlands at some point. These three are the largest cities in the Netherlands, and I’m a city girl. If I ever chose to move there, it would be to one of these three. There are some fun aspects of all three.

That hotel is adorable! I think we’ll be staying in the downtown area of each city so that we’ll have easy access to all the sights. Delft looks really, really cute though. Was this city a highlight of your trip?

Regarding Delft, yes. It was really memorable. Loved seeing the way they make Delftware. But things that are “cute” rate really highly on my list! I went with my mom who wasn’t a speedy walker and we had no issues getting around from that location - it’s right in the center of a very cute town. We traveled easily into Rotterdam and enjoyed visiting the Kunsthal art museum.

In other Netherlands locations news…my favorite places on earth are Open Air Museums. Americans might think of them as living history museums. They depict architecture and lifestyle of historical populations. Netherlands has many, most of which are easy to get to via train and public transit.

The Openlucht Museum in Arnhem is one of my favorites. I’ve been a number of times and hauled everyone I know there. Probably one of my top five places on earth to visit.
https://www.openluchtmuseum.nl/en

I’ve also done this train trip which is really fun if you like old trains, and you can tie in a visit to the Zuiderzee if you like. Runs between the historic Zuiderzee towns of Hoorn, Medemblik and Enkhuizen:
http://www.stoomtram.nl/en

I’m not down on cities, but I will say that some of the charm and delight that can be found in the Netherlands, to me, lies outside of the larger cities. I would strongly recommend spending at least a couple nights of your trip or one night visiting those towns outside the city. Especially since you’ve got other cities in your itinerary.

Thank you for all your suggestions!!! Delft does look really adorable, and I really want to visit a smaller Dutch town while I’m there. I’d considered going to Volendam because it’s still pretty close to Amsterdam so I could easily do a half day trip.

Delft is frequently listed as a must-see town in the Netherlands, so maybe I should prioritize it by spending one day/night there. I’m not sure if I’ll make it to your other suggestions because they’re farther away, but I appreciate you sharing them!! I’m struggling to allocate my time at the moment. I’m worried that more hotel changes might be a little stressful for me.

In Paris, I recommend The Hotel Baltimore. Walking distance to the Eiffel Tower You can see the Eiffel at night from the higher floors. It is also walking distance to Champs Elysees and the shopping areas, and you can hop on the Big Bus line there. We bought a multiday pass for the bus and went literally all over the city at will.

There is an awesome French breakfast served in the hotel, a nice little French bistro next to the hotel, and an awesome Italian place across the street. Lots of food in the general area. 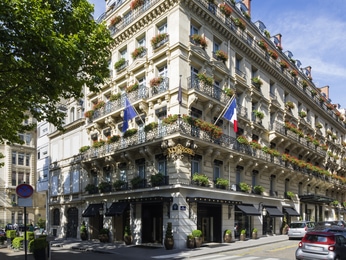 The Sofitel Paris Baltimore Tour Eiffel is nestled among the most beautiful districts of Paris, close to the Champs Elysees, the Arc de Triomphe and the Eiffel Tower. This beautiful building was transformed into a luxury hotel in the 1920s and then...

Unless you are only seeing part of the Louvre, figure on 2 days for it alone. We saw a lot in the 5 days we were there - all the major sites and a lot of small out of the way places.

My favorites are from 20 years ago but here you go:

Thanks for your suggestion! This hotel is too rich for my blood

. I think I’m going in an expensive time of year, so that may be part of it. Looks wonderful though. I’m sure the view is spectacular. The Big Bus line is something I’m considering for one day. It would give me the opportunity to see the major sites pretty easily. I’m glad to hear it worked for you!

I wish I had more time for the Louvre! I’m sure 5 days gives you the opportunity to see a lot more things. I can at least get a taste this trip though! I’ll probably make a list of the art I most want to see, and then wander the museum once I’ve seen those. Only 1 day unfortunately!

Oh, I was hoping for some food recommendations! Restaurant Barbizon is still rated very highly. I’ll keep these in mind when we’re looking for a restaurant. Thanks!

We also loved the Rijksmuseum in Amsterdam.

We went to the Anne Frank museum in Amsterdam and thought it was moving. But I’m not sure if it’s a must see.

I will second Tia’s recommendation of the Anne Frank House. My daughters were 4 & 6 years old when we toured it and my oldest still brings this up as one of her favorite things of all the trips we took during the 2 years we lived in Brussels!

@Katers87 - my then 3 year old daughter tasted her first Falafel ever at a little joint on the Grand Place in Brussels and promptly fell in love with it. She loves it to this day.

One other adventure for us was in Amsterdam where we had Indian food for the first time. I can’t remember the name of the place but it was a recommendation from a friend who lived there. It was WONDERFUL! It was also the beginning of a new found love of the plethora of spices, vegetarian dishes, curry and really anything masala.

I will second Tia’s recommendation of the Anne Frank House. My daughters were 4 & 6 years old when we toured it and my oldest still brings this up as one of her favorite things of all the trips we took during the 2 years we lived in Brussels!

If you want to visit the Anne Frank House, it may be good to know that you have to buy online tickets for a specific timeslot about two months in advance.
I’ve never visited the Anne Frank House, so I can’t say whether it’s worth it. If you’re interested in World War II, you could also visit the Hollandsche Schouwburg, a holocaust memorial in a former theatre that was used as a deportation center by the nazis.

We also loved the Rijksmuseum in Amsterdam.

The Rijksmuseum is a great museum indeed. I’ve been there once after the renovation and I really liked it.

If you like palaces, you might like to visit the Royal Palace of Amsterdam. Other than that, I don’t know much about Amsterdam. Weird, isn’t it? People often don’t visit many tourist attractions in their own country.
I still want to visit the 17th-century Portuguese Synagogue (and the Jewish historical museum), which is also said to be a very beautiful building.

Delft is frequently listed as a must-see town in the Netherlands, so maybe I should prioritize it by spending one day/night there.

That’s definitely a cute old town. It played quite an important role in Dutch history, the leader of the Dutch revolt, William of Orange was murdered there, you can still see the bullet holes in the wall in museum the Prinsenhof, and there’s the church where he and other members of the royal family were/are buried. The city centre is small compared to Amsterdam or Rotterdam, so it’s doable in one day.

The Mauritshuis, a museum with paintings by artists like Vermeer and Rembrandt. It’s located next to the Binnenhof, the houses of parliament.

Welcome to the Mauritshuis website. The Mauritshuis is home to the very best of Dutch Golden Age painting. The compact, yet world-renowned collection, is situated in the heart of The Hague, right next to the government centre. Masterpieces such as... 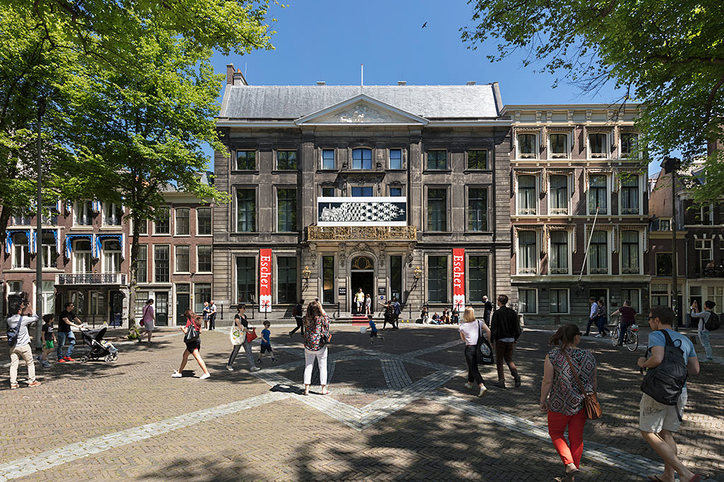 Prepare to be amazed by the works of M.C. Escher - Escher in het Paleis

With over 150 prints you can always see the best known works and a changing selection of prints from the complete works of Maurits Cornelis Escher.

I haven’t been to the others but for Paris, when you aren’t spending $$$ on a nice meal, I enjoyed wandering around to the grocery stores and boulangeries/pattisseries where you could tell the locals did their shopping for breakfast and lunch. I also enjoyed shopping in the St Lazare area at the malls au printemps and galleries lafayette (more browsing than actual shopping). I took the train out to Versailles which was pretty cool, especially the gardens.