I’ve had 2 Pod failures in less than 24 hours. The first was due to an insertion problem (bruising at cannula site on lower abdomen) and the second a few minutes after I got home from yoga (was on my arm, got “communication failure” message). Does Insulet offer replacement pods in these cases?

I know for sure the second case will warrant a replacement (we’ve had them replaced for this reason plenty of times.) For the bruised site issue, we’ve not had that issue yet, so i can’t speak to that.

What I will say, though, is - although they’ve been generally good at replacing things for us, it sometimes depends on who you talk too. We have had more luck with some people than others…some people expect the exact error information, error code, description, etc, and others just say it’s OK, we’ll replace it.

Is the “communication failure” permanent? I get these occasionally, especially when the pod is on the back of my arm or too far around my side, and the PDM can’t find a signal, but once I move the PDM closer to the pod, the alert clears and everything continues to function just fine.

Insulet has always replaced pods when I’ve called – in my case for early changing because of discomfort, unexplained highs, or leaks – and I’ve never been challenged in any way. I was told by one customer service person that if a pod didn’t work out for any reason and had to be changed early, it would be replaced. I also seem to remember some mention of “in the first 48 hours,” but they don’t always ask when I inserted the pod in question.

They may ask you to return the pod, so don’t throw it out or toss in your Eco bag! When you call, they will ask for a couple of numbers that are printed on the pod, and last time I called, they also asked for my PDM’s serial number (which was a first), so have everything handy.

Thanks, that’s good to know. The shrieking alarm sounded like “red alert” on Star Trek! I bet Liam hates that as much (or more) than I did!

I did try moving the PDM closer to the pod–no change, kept shrieking. I did set it aside…just in case. Thanks!

I did try moving the PDM closer to the pod

Ah, different kind of error, then. My PDM buzzes and tells me there’s a communication error, but the pod doesn’t shriek. 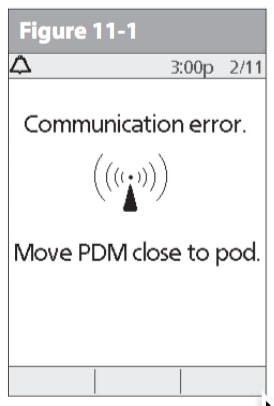 Wish that had been the problem this time! I do get that situation once in a while, eg, moving around the kitchen while the bolus for a meal is running. Overall I have to say I am having a very good experience as a Podder.

had 2 Pod failures in less than 24 hours.

Me too!!! I’m on the third pod in 40 hours. Haven’t read your whole thread yet, but seems strange. Cannula came out in my first, then mysterious alarm in the middle of the night for the second.

Does Insulet offer replacement pods in these cases?

Yes, they will replace it for pretty much anything. If it falls off before 3 days is over, bad insertion, pod errors, any of those things.

When you call, they will ask for a couple of numbers that are printed on the pod,

You can also get the pod serial number and lot number from the PDM.
Go to Records>>All history>>Pod activated.
Select that and hit the “?” mark.

It’s much easier to read than it is from the pod itself.

Weird, weird, weird! At least with the first (insertion) problem, I knew to change it out as soon as I saw my CGM reading of 247 this morning (fingerstick came up 217) so I used a 4-unit Afrezza then changed the pod.

ETA: Sorry you got the weird alarm in the middle of the night. Hope you were able to get back to sleep okay.

My PDM buzzes and tells me there’s a communication error, but the pod doesn’t shriek.

Yup - was in a pub last week having a bit of a carb fest wearing a pod on my back. I thought I gave a bolus but when I went to give the next bolus I saw an error on the PDM that said the last bolus command did not make it to the pod.

That set me up for a night of corrections. I can hear the beeps when I don’t care (like cancelling a temp basal) but somehow when it really matters I can’t hear the beeps. Too bad there is not a vibration feature.

Back to @CatLady 's question - My experience is that Omnipod basically guarantees to replace every screaming POD, and will pretty much replace pod failures that are your mistake too (like not sticking it on right) within reason.

In my experience, they want the screamers back to do a post mortem on them.

With that said, I have been podding for 9 months and have only had 3 failures so I am not that experienced in pod failures.

You can also get the pod serial number and lot number from the PDM.

Well how about that! Now I can put my magnifying glass away.

With that said, I have been podding for 9 months and have only had 3 failures

I have been podding for 11 months and have had no failures at all.

Now I’ve jinxed it. They’re probably all in my next shipment.

We had a TON right when we started using the POD, like 3 or 4 back to back…but we’ve since written those off to user error. We now average about 1 per month.

There is a vibration feature, but only the PDM vibrates, not the pod itself (which would be easier considering we would definitely feel the buzz!). If you go to Settings > Vibration you can pick your setting.

You may already know this, but figured I would let you know just in case! I enjoy the vibration feature as it doesn’t interrupt my classes with the loud beeping. Hope that helps!

I have my PDM set to vibrate only, but it will only vibrate for certain alarms. I have most of the alarms turned off.

Thanks @Aylish! That’s good to know!

I think in re-reading this thread, along with some of the other recent OmniPod threads about site failures, that there is a very clear distinction that should be made between a Pod failure and a site failure.

For instance, the alarms or malfunctions where the pod screams or beeps, probably a Pod failure. When BG continues to rise but Pod and PDM are working, probably a site failure.

We started podding 4 months ago and that wasn’t clear to us (having never pumped before).

there is a very clear distinction that should be made between a Pod failure and a site failure.