How to silence a pod alarm

This is possibly a bit of old news for pod users, but just in case you don’t know, you can silence the pod alarm without your PDM.

Usually if you have a pod alarm for things like occlusion or expired pod, you just use your PDM and deactivate the pod. But what if you are caught without your PDM? Or worse, you lose your PDM? Or if the PDM loses ability to communicate with the pod? (I have never experienced that myself, but have heard it is a possibility).

Here is how to silence pod alarms without the PDM:

Take a paper clip (or pin or thumbtack). Push it into this area of the pod shown below. 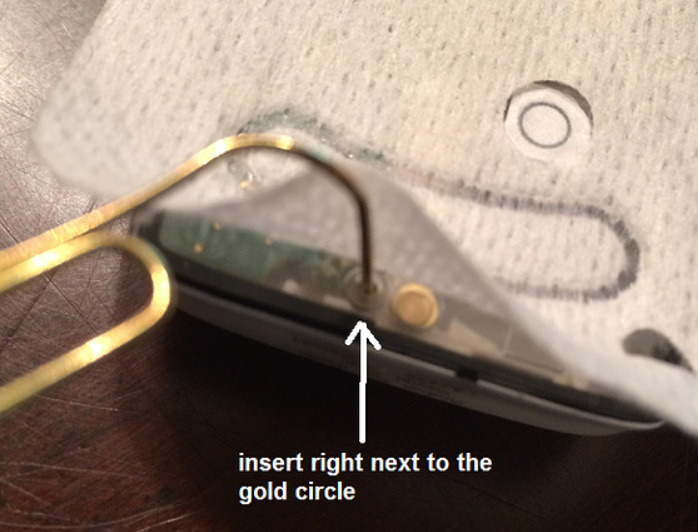 There is not a “hole” already there, but there is a little area where you can make a hole. You have to push through to get into the pod. Pierce the pod surface with the paper clip/pin/thumbtack and push it into the pod. 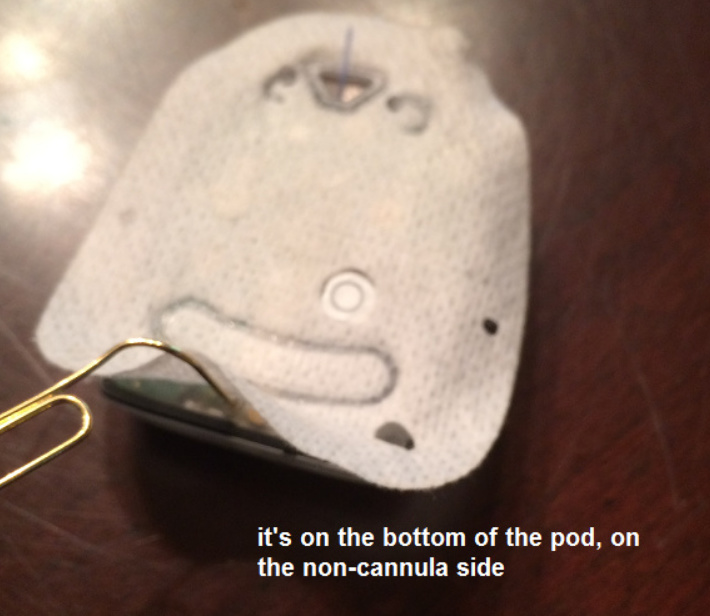 You don’t need to leave the paperclip in there. Once you pierce the surface, the pod will be quiet.

Next time you deactivate and remove a pod, try it so see that you can find the right spot! That way, you won’t be fumbling around with a noisy pod and not know what to do…

Here is how to silence pod alarms without the PDM

Just what I needed! Thanks, @Eric

Have you done it yet?

Not yet, we have a day to go, waiting to do it with the boy!

Hammer or smashing with a rock works too.

Hey . . . sometimes a paperclip is not readily available

I’ve had to do it multiple times.

I have a “paper clip” in my d-supplies closet because, just like pencils and ink pens I can never seem to find one when I need it.

At least two of the times I’ve had to do it were after I attempted to de-activate the POD…the process of deactivating errored for whatever reason which resulted in the POD continuing to alarm. Liam hates that sound and wants it off his body fast when that starts, so we act fast to get it off and get that paperclip punched through that hole.

My pump trainer uses the Pod and showed me this trick, which I haven’t had to use…yet!

Or if the PDM loses ability to communicate with the pod? (I have never experienced that myself, but have heard it is a possibility).

That just happened. At 1:45am the PDM failed to communicate with the pod while I was trying to lower the basal rate and it went bananas. While we are sleeping in EH’s brother’s basement. Can we find a pin? A paper clip? Nope.

I did find a vice grip in the garage and managed to make it less noisy by squeezing it in there while I searched for something to poke it with. Finally found a very small nail. It worked!

Thanks @Eric for being the first hit on Google! I was panicked we’d wake the kids and all the other adults.

Also we had to call OmniPod and get reset instructions. There’s a little hole behind the door where the batteries go and you poke that - so keep your poking device handy. Now I think of it a lancet might’ve worked.

Anyhow back to sleep.

Another option to finding that darn pin… once pod is removed throw it in the freezer… it doesn’t stop the sound but once u close the freezer you can’t hear it anymore… Unless you are right close to it or have super hearing. And about 2 days later ish it will die… Or you’ve had time to find a pin or a hammer for those guys out there.

I know this is old but an interesting read! I recently watched a YouTube vid of an Omnipod teardown that showed this location. There actually is a hole in the plastic case at that point; its filled with what appears to be silicone that can be punched thru. Beneath that is small piece of the circuit board (small square of PCB with a neck on one corner connecting to the rest of the PCB). Beneath that is a cavity that will accept the broken off PCB piece. My understanding is it isn’t documented in any Omnipod literature, but obviously was intended for use by a PCB designer.