Several members recently mentioned needlephobia, and described how much more time they end up spending on injections. I coincidentally ran into this interesting device, which got good reviews and mentions in the UK from needlephobic PWDs: 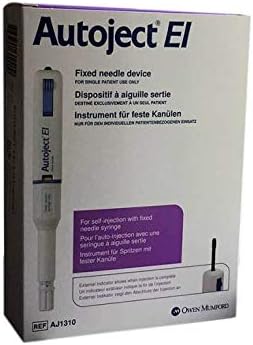 The Autojet hides the syringe into its shell (so you never see the needle or the syringe during the injection), and the trigger makes the injection happen instantly, quickly and seemingly painlessly. Here is a Youtube presentation of the device by a user (for a dog): 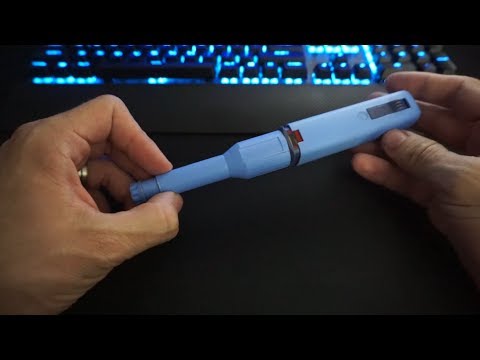 and another, more focused on using the product (also for a dog): 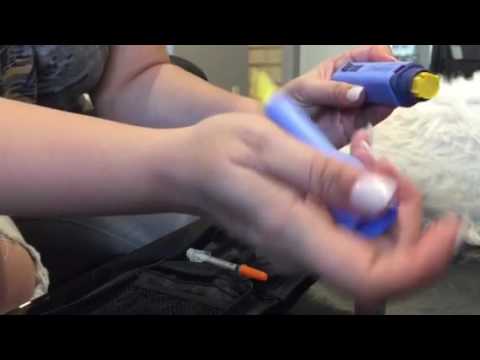 Many of the users on Amazon use it for penis injections, and write that it makes the process a lot easier – I can believe that easily… One forum review from diabetes.co.uk:

I’ve had T1 diabetes fro 41 years but still have real fear of needles and it used to take me up to half an hour to do each injection (no exaggeration). I discovered a number of years ago the Autoject from Owen Mumford. You load the syringe as usual, put it into the Autoject, rest it against the skin and press a button. It puts the needle in (the problem bit for me) and then the insulin. It honestly did change my life, It now takes seconds for me to do the injection.

This interesting article from 2000 – I was a child then (NOT) – lists several auto-injectors, including the Autoject:

Many of the users on Amazon use it for penis injections, and write that it makes the process a lot easier – I can believe that easily…

I don’t know what that is, and I guess I will never know because I am not gonna google it.

I can definitely understand needlephobia for that…

I think I hear the sounds of a hijack rapidly approaching…

the sounds of a hijack rapidly approaching…

I really thought it was a typo until I looked at the reviews on the Amazon link!

On a more serious note, I’m one of those with (mild) needlephobia, so this seems pretty helpful - injections still take a little longer than they should for me.

I really thought it was a typo until I looked at the reviews on the Amazon link!

Aaron, why don’t you google it for us.

for problems raised in the community

I think if it’s raised, then there isn’t a problem?

Many of the users on Amazon use it for penis injections

I really think this calls for an @Eric experiment. FUD’ers demand it! Maybe for the glucagon experiment?

a bunch of 8-year olds

a bunch of 8-year olds

Thank G_d we are all keeping our sense of humor! This is one of the things I like most about spending time here: I get a lot of laughs every day, and around a topic I don’t laugh about!

I used an autojector for many years before using pump. It was great for reaching many alternative sites after my legs and stomach were atrophied.

I used an autojector for many years before using pump.

i am curious, since I have never seen one in use in real life: how is it better to access other sites?

Which one were you using, btw?

after my legs and stomach were atrophied.

Off topic - when you had problems with your legs and stomach, was this when you were giving one or two shots a day and injecting a large amount of insulin all at once?

The Autojector I used totally enclosed the loaded syringe, with a button on the side. I could reach my arms and backside, and just press the button one handed. The needle was quickly inserted, AND plunger also pushed in from the spring loaded release. Just had to count to 5 to make sure insulin was delivered before pulling away.

I think I had Autojector I or II. It was black and grey, with a red button. It had 2 parts that screwed together, after putting in the loaded syringe. And multiple tips that screwed on the end to adapt for different needle length.

Yes, it was after 20 years of Lente and NPH/REG mdi, before human insulin was available. Although I was probably using 20-30 TDD during that time, with 3 injections per day before pump in 1996.

I used NPH+Reg before breakfast. No waiting, ate within 5 min. Lunch was covered by NPH peak, so timing was important, but was convenient to not have to do lunch time injection. Then Reg for dinner, and small dose of NPH before bed. So morning time was the largest dose, around 20-23 units.

Startled getting A1Cs during 1985-95 on this NPH regime, and was very erratic bouncing between 9-14, along with 3 before meal only BG testing, but NO guidance regarding carbs. Once I switched to pump, THEN they decided it was relevant to count carbs and vary meal bolus, according to meal choices, because the pump could calculate better than me. Sorry, off topic!!

The Autojector I used totally enclosed the loaded syringe, with a button on the side.

@MM2, do you have a pic? I am curious and can’t find the device you used to use