I noticed you started pump in 1981, Auto-syringe. I would love to hear more about that. I was still doing single day injections of lente and would have freaked out at the thought of a pump.

It was the Auto-Syringe AS6C, which on the web has been called “the first practical insulin pump,” probably because its predecessor was far from practical: the size of a Kleenex box, with the syringe exposed on the front, two big dials and a flashing red light.

I had just started seeing a diabetes doctor, though, and he persuaded me to try a newer pump (after being on a shot of Lente once a day for years, my dose maybe changed a unit or two when I saw my family doctor once a year). The AS6C was about the size of a paperback book – 6 inches long, 3.5 inches wide, and an inch thick, and weighed 10 ounces. (This is not from memory – I looked it up.) It was fairly conspicuous, and too big for a pocket. I remember I went off to university residence, and everyone thought I was this weird computer-science nerd who took his fancy calculator everywhere, even to the bathroom. Later I fashioned a bizarre holster to hide it under my shirt, made from a sock and the waistband of a jockstrap. (Dang! I could have been the original Tallygear.)

It took Regular insulin in a 3 mL syringe, diluted with saline. My small-town local pharmacy had never had to dispense saline for injection to anyone, so they gave it to me in a 4-ounce bottle with a screwcap. It was easily contaminated.

The tubing was about 2 feet long and ended in a 27 gauge needle that was probably an inch long, with no butterfly. You pinched the top of the needle and stabbed it in, taped it over with see-through surgical tape, then looped the tube and taped that down, otherwise even a gentle tug would have pulled the needle out from under the tape. The recommendation was that you keep the needle in until the site began to feel irritated. Seriously.

Pumps were new enough that I had to stay in hospital a couple of days at start-up. Within hours my chronically high blood sugars were down to a normal range, and for my body that was so unusual that I actually felt ill for a while.

I found a couple of pictures on the web. One shows the pump next to what looks like a MiniMed 507 or 508. The other is a good shot of the back. You set the basal with a little screwdriver. You could only set one basal. If you were a sophisticated user and had a different basal for overnight, say, you’d have to remember to get out your screwdriver and change it, and then remember to change it back in the morning. If memory serves, to do a bolus you moved a sliding switch on the top from Basal to Bolus, then pushed that button on the back until the number on the tiny red LED screen showed the correct number of units. If you went too far, you had to start over. I honestly can’t remember how you then initiated the bolus. 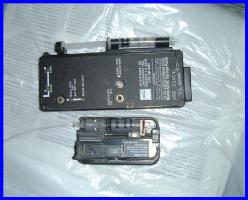 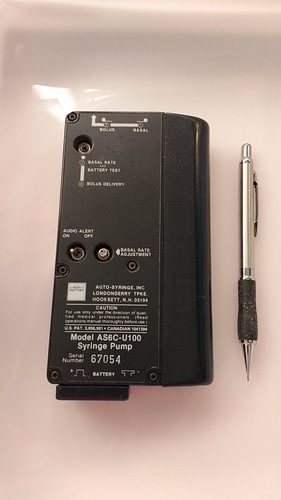 A few years later I switched to a Nordisk Infuser pump. I can’t remember exactly why I made the switch so soon, because these things were pretty expensive. The Nordisk took prefilled cartridges of insulin, which would have been a clear advantage over DIY dilution, and it could probably handle more than one basal setting, but I suspect it was the much smaller size that sold me. 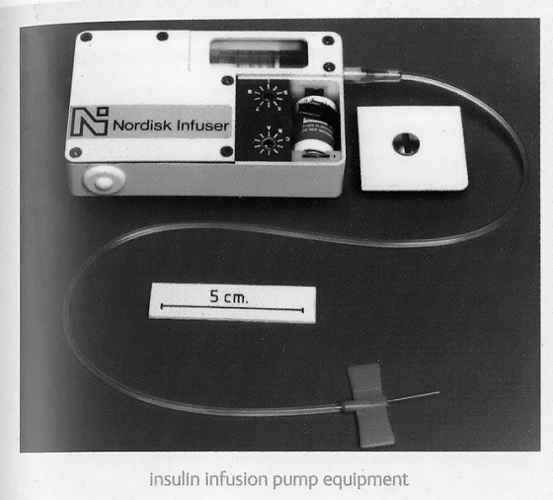 My small-town local pharmacy had never had to dispense saline for injection to anyone, so they gave it to me in a 4-ounce bottle with a screwcap. It was easily contaminated.

The saline bottle had to be kept refrigerated, of course. When I crossed the country by train to go to university, I didn’t have access to a fridge, so I just kept the screwcap bottle in my luggage and didn’t pay much attention to it. When I arrived on the opposite coast, I fell dreadfully ill and had to go to emergency, and I took the bottle with me just in case I needed to refill while there. All the ER nurses gathered around my bed to examine the newfangled insulin pump. Then the senior nurse, a Scottish lady with a thick accent, held up my saline bottle, gave it a shake, and said, “Young man, there’s feces in this.”

Sure enough the saline was looking a bit pond-scummy after five days out of the fridge. The hospital kindly hooked me up with a big-city pharmacy that could provide me with – the novelty! – saline in a bottle with a rubber cap.

I tend not to get excited about things, but now and then I look at my little Omnipod and think it really is quite astonishing what they can do these days.

@Beacher. You have been quite the technology pioneer!

I thought I had been on the technological cusp with the original accuchek Bg meter back in '81-82. But you make me look like a Luddite.

Around that time I had the Ames Glucometer, which was the size of a brick and had come out in 1981. I didn’t get it that early, but I had it before the more popular (read smaller, faster) Glucometer II came out in 1985. I seem to remember it cost about $600. It had a 60-second countdown to your result. Blotting the strip properly before inserting it in the meter was very important. You couldn’t get any fibers on it, so you couldn’t use kleenex. I used to steal those brown paper towels from public washrooms. 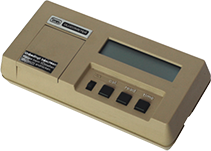 I also had one that used a huge drop of blood to put on strip, wait 60 secs, wipe off blood, then insert to the machine and wait another minute. Then later the 45 sec wait meters came out. Folks today are so spoiled.

I vaguely remember having a separate device, that attached to the Accu-chek 2. I think it was called Merlin and saved the BG readings, and other info, so I think the meter itself did not have memory.

You have been quite the technology pioneer!

Hardly. Pioneers venture into and explore unknown territory. There may well have been pioneering practitioners and patients elsewhere, but my healthcare providers saw the pump as just a more modern and convenient way to give injections. (Lucky you, no more needles!) Never was there any suggestion that the pump afforded patients any autonomy. Never was there any suggestion that patients might adjust their doses on their own. As on injections, you had your set diet plan, and your doctor told you to take, say, 8 units at breakfast. Whether you ate one slice of toast or six, whether your fasting BG was low or high, you bolused your 8 units. You’d go to your doctor and he’d say, “Looks like you’re a little high after breakfast. Why not try 9 units. See you in six months.” I wasn’t given a variable insulin dose scale for another decade. It wasn’t until 1995 that anyone told me about carb counting.

I think @MM2 is right, that younger people are more ready to try out and tweak newer treatments and technology, whereas for older generations (and at 56, I’m not that old), we were more used to doing what doctors told us. And of course we didn’t have forums like this, where ideas and experiments could be shared. AIDS was/is a tragedy, but one good outcome was that, because of inertia in the medical establishment, patients began to take their treatment into their own hands; patients told doctors what treatment regimen they wanted to try. The earth shook. Today it’s totally routine to go to your doctor and say, “I want to try this,” or to try something on your own without even discussing it. That’s where we see the pioneers.

Within hours my chronically high blood sugars were down to a normal range, and for my body that was so unusual that I actually felt ill for a while.

@Beacher, it is amazing – and moving – to read about your experience being a pioneer in the 70s.

I didn’t even know insulin pumps existed until mid-1990s.

Up until 1984, I was using single injection of Lente, and moved to a new location. Found what I thought was state of the art medical care at local university hospital. They switched me to NPH/R, with meal exchanges, and provided ‘intensive education’. I was working for a major employer with good insurance, and sure that pump would have been covered if they suggested it.

Anyway, I managed the next 12 years with NPH/R, without serious lows. However A1C started to be tested, and mine bounced all over the place. My endo at the time thought below 10 was a great accomplishment, and would add a star to the snail mail letter that reported the results. I would get a 9. something, get a atta-boy, but I had no clue what I did right that last 3 months to get it. Next time it might be 11.something.

BG testing was only done before meals (4 strips/day covered) to calculate R dosage, and before bed. NPH injection before bed, which had to be done with a small protein snack. (a bedtime habit I still find hard to break).

Since I never experienced a serious low, trip to ER or went into DKA, I was a star patient in good control, why mention a pump ? I don’t think they mentioned it until 1995, and I had also joined a diabetes support group where it was talked about and I met ‘real’ people using a pump who were excited about it. So I finally switched to pump in 1996, which came in quite handy as my job involved several overseas trips, and juggling NPH/R might have been a challenge with time zone changes and different foods. I don’t think pens were available at that time, so having pump meant easier, discreet bolus with very unpredictable schedules and meals.

Prior to pump, NPH covered my lunch time meal, so it was very inflexible. If you didn’t eat when NPH was peaking, you would definitely have lows.

So then I’m using Minimed pump, first 507, 508, 522/523. Neither my doctor or Minimed informed me about CGMS. I found out from a co-worker who had son with T1D and using it. So asked my doctor and initiated the start-up for using the ‘harpoon’ sof-sensors. This was eye-opening to see post meal BG spikes. Sounds stupid now, but I had never checked BG post meal because the doctor didn’t tell me to. BG check was only required to determine how much R was to be added to meal time bolus for the pre-meal BG, using pump wizard. Carb counting was used, along with following the food pyramid and food exchanges to estimate carbs.