Do you all use the case that came with your meter?

Every 6-12 months I buy a new long leather wallet with a zip-up pocket in the back. You know, the ones that were once built to hold a checkbook? I stick my meter, lancing device, and test strip bottle in the back pocket. Usually there’s another small zip pocket inside (for change) where I can stick used test strips when a trash isn’t nearby.

This means that my meter is always with me any time I leave home because I always have to bring my wallet!

Wish I could fit my pens and pen needles in there…

This is a bag from an older, larger meter that I’ve been using for years. It carries everything I need–strips, meter, poker x2, insulin pen, extra pen fill cartridge, pen needles, syringes, inhaler, bandaids, Neosporin, OTG cable, emergency hard candy. And there’s more room in the inside and in an outer pocket.

I take it with me wherever I go, and if I don’t have it when I leave the house I know that something’s missing. 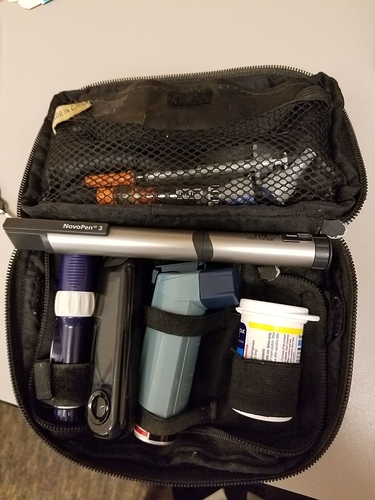 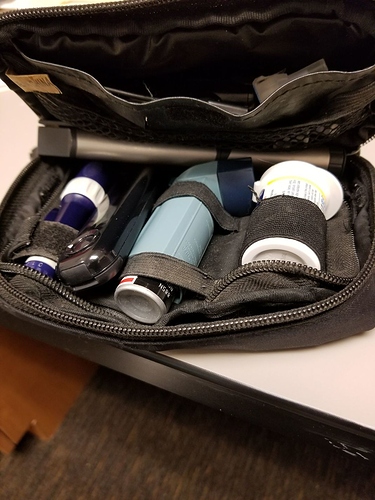 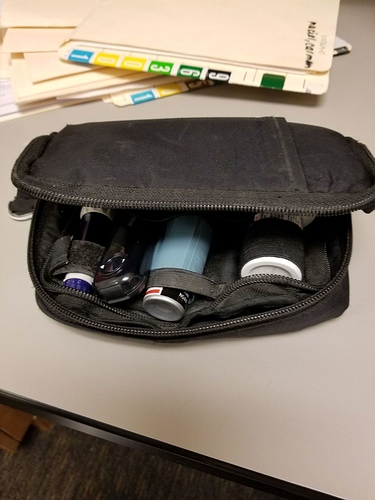 That’s quite the case!!! I think I had one of those when I was younger (though it wasn’t stocked near as well). I’m not sure there’s room for that in my purses now though

We don’t. We left the hospital with a cheap, cheesy camo case, but we used it for the first year. We upgraded to the Thompson Diabetes Travel Carry-All last August and we LOVE it. Here’s a link to my review of it.

You’ve gone the fancy route with your case. Leather! I’ve realized I’m nowhere near as well stocked as you guys are.

I just bring my meter (as described) and a little makeup bag with my Humalog and Lantus pens and pen needles. I also keep some form of sugar in my purse- usually a gatorade. I’m always in the middle of the city though, so I don’t worry too much about the sugar. There seems to be a CVS on nearly every corner.

We don’t. We have what we need and what we MIGHT need in the event of a failure. Nothing would suck worse than being out and not being able to get insulin into Liam, so we have a few fail safes just in case.

Since Liam has at least 2 caretakers, back-ups are probably a good idea. If one forgets to restock, then the backup is there. Smart

No, I don’t use the case that came with my meter. My Contour Next Link meter came with the worst meter case ever. I’m still wondering what went through the designer’s mind when designing that case. It’s almost impossible to close that pouch if you put a meter, lancing device, lancets and test strips in it. Also meter buttons are covered by the rubber band/transparent plastic that holds the meter, which makes it harder to press them. I’m not the only one who hates it, given these topics over at TuD: topic 1, topic 2
I called Bayer and they promised to send a better case. Well, they sent another case, but not one that was designed for the Contour Next Link, but for a different, bigger meter. So the meter was way too small for the loop that should keep it in place. In the end I cut the useless loop out and exchanged it for some velcro to hold the meter. I don’t like the case but I’m still using it, because I haven’t found anything better. For companies like myabetic.com it’s probably not profitable to design cases for every specific meter.

Wow! I didn’t realize there were different versions of Myabetic bags. I thought they were all like @ClaudnDaye’s (not that yours isn’t nice

). Some of these purses are super cute!

What a smart company.

The Contour strip bottle is ridiculous too, right? It’s huge!!! No wonder they can’t figure out how to create a case that fits that bottle and everything else properly.

Yeah, they sell all kinds of different styles, small and large alike. I’m sure they have something you’ll like. They’re not the cheapest, but they’re quality products.

I don’t have a Myabetic bag. I still use a Bayer case. I meant to say that myabetic cases look really nice, but won’t be a good solution to my problem.

I don’t find the Contour bottle that ridiculous. I hated my previous strips more because they were wrapped individually.

Oh, I think the bottle is unnecessarily tall. Still, sounds like an improvement over individually wrapped strips!!! What meter were you using?

That was an Abbott Freestyle meter, I don’t remember which version. The idea behind individually wrapped strips seems to be that it prevents contamination.
The bottle is indeed somewhat tall for the amount and size of the strips it contains.

Ah, haven’t used that one. I’ll make a note to avoid using it in the future

I’ve realized I’m nowhere near as well stocked as you guys are.

We are not either. EH uses the Freestyle lite meter case, has the meter, the accucheck fastclix lancet device, strips, pen needles. It fits in a pocket which is why he likes it. He then has the insulin pens with him (even though he’s using the OmniPod we still have pens and needles just in case). Travels really light around our small town. Sometimes carries a leather man-purse but often gets annoyed he has to (because of the diabetes) and just shoves stuff into his pockets. If he’s out of town or on a business meeting he carries sugar and the man purse to hide it all in.

I should also add:he doesn’t like the Freestyle case. He just uses it because we’ve never come across anything better. It works because he can flop it open and get strips out easily and not have to remove anything from the elastic. The Velcro is brilliant though. So maybe we will come up with something better. Thanks @Boerenkool!

I love @Katers87 idea for the wallet for ladies to use. Now I just need a man version!!!