I’m travelling, and when I travel I like to bring much of my own food. Between eating low-carb for diabetes and food allergies, I sometimes find myself in a restaurant where there’s nothing I can eat. (Note: I think eating low-carb alone, without allergies, while travelling is fairly easy.)Usually I like to bring breakfast and lunch, since those tend to be buffets or fast food or catering. Dinner is usually at a restaurant, but I still like to have some backup food options.

For breakfast I’ve usually brought hard-boiled eggs and pre-cooked bacon. I did that this trip, but it’s not the most convenient thing to put in your luggage, though doable.

A friend of mine with allergies used to bring packets of instant oatmeal as breakfast. This seems the perfect solution for breakfast, as it’s portable, healthy, and requires no fridge. But it’s not low-carb. So I set about making my own low-carb version of instant oatmeal complete with it being sweet. (Some may find it too sweet.)

I’m not sure of my exact measurements, but it’s something like this:

It tastes exactly like “brown sugar” flavoured instant oatmeal to me, when combined with hot water and stirred then left for five minutes.

I was going to add a photo., but FUD is not allowing me to upload photos for the past month.

FUD is not allowing me to upload photos for the past month.

@Jen, I think it is because we decreased the max size of pictures lately. They are limited to 256kB now. Do you have a way to take a screen shot on the computer? I use snagit to shrink picture sizes to almost nothing.

The reason for the shrinkage is: we are piling up media, and our hosting fees go up in tiers that include how much storage we use. So we need to use as little as possible

I LOVE your recipe. I wil buy the ingredients and try it asap.

I tried to like chia pudding, but just couldn’t get into the texture (seems like lots of other people love it tho!). What’s the texture of this like compared to straight up chia pudding? I still have a lot of chia seeds left, so finding a use for them would be nice.

Let’s see if this works… I usually use my iPhone to post, but I tried taking a screenshot of my picture. (This is with blueberries and unsweetened almond milk added.) 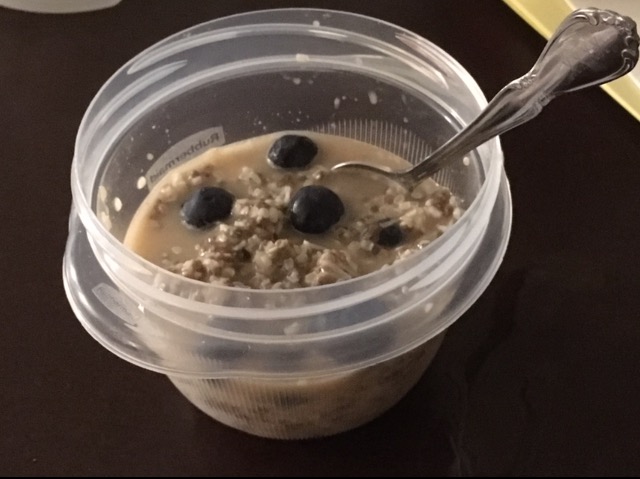 I hope you like the recipe! Be aware that it’s quite sweet, because I was trying to emulate the taste of instant flavoured oatmeal and hide the taste of coconut.

It’s less dense and “slimey” than chia pudding. I find chia pudding edible, but I have to be in the mood for it, which I’m usually not for a daily breakfast.

It’s less dense and “slimey” than chia pudding. I find chia pudding edible, but I have to be in the mood for it, which I’m usually not for a daily breakfast.

Cool, sounds like it could be worth a try for me then! It’s definitely the sliminess that didn’t work for me. Maybe I’ll just have to keep the chia seed ratio on the low side.

Ewww on slimy foods. No heavy chia stuff for me. I don’t even like ripe bananas because they are slimy tasting…

I don’t mind slomey…I like chia seeds in drinks, yogurts, and jams. But chia pudding is a lot of chia at once!

I don’t taste the coconut at all because it’s covered by the sweetness. It provides some chewiness, which is what failed with my previous attempts at mock oatmeal. I was thinking this morning I might try to make different flavours.

You might try some unsweetened cocoa powder if the idea of cocoa-flavored oatmeal is at all appealing. I could see cocoa-cinnamon being really good.

@Jen, how do you prepare it? We have had mixed success with getting the right consistency for chia seeds. Can you share your method, and your prep tricks if any?

I literally just dump some hot water into it, stir, let it sit if I have time, add some almond milk, and eat. It doesn’t have the same consistency as chia pudding or oatmeal, but I like it. The recipe above makes a big bag and I just use it over a week or so. I’ve begun finding it a bit too sweet x so I might decrease the sweetener a bit in future versions.

Do you think the chia seeds are vital to this being an imitation of oatmeal? I can’t tolerate them, but I do miss oatmeal! I might play around with this and see how it turns out…

Do you think the chia seeds are vital to this being an imitation of oatmeal? I can’t tolerate them, but I do miss oatmeal! I might play around with this and see how it turns out…

Nope. You could probably use something else. I just like chia seeds. I’ve heard golden flaxseeds are good. I also wonder how oat fibre would taste in this, and whether it would give it a more “oat” taste (I just got some oat fibre, but haven’t used it yet).

Great, thanks! I’ve been trying to stick to more lower carb/grain free recipes lately, but especially for breakfast when my insulin needs are higher. Had French toast with a quick almond flour microwave bread this morning. Yum.