Insulin containers/ storage in the fridge

We normally keep our insulin in two batches. The big batch is all the “reserve” insulin, which we keep in insulin containers in a fridge. The small batch is the “current” insulin, which includes, for us, the most recently open pen and cartridge boxes of short- and long-acting insulin.

So far, we have kept the current insulin in ad hoc containers: ziplocs, tupperware, or nothing… After having it fall accidentally too many times on the floor, we finally decided we would find an appropriately sized container for it, that will adequately protect it from shock and contact with other fridge goods. After some experimentation, we found this almost ideally sized Lock & Lock container:

Shop LOCK & LOCK at the Amazon Storage & Organization store. Free Shipping on eligible items. Everyday low prices, save up to 50%.

This is what it looks like with insulin pens in:

LockandLockInsulinBoxP2017-07-31600×800 110 KB
.
We are now keeping it in the fridge with a couple of unfrozen ice balls inside, to dampen temperature variations inside the box.

This one, 3.38 cup, rectangular is just a bit longer than the previous, but very close:

It is long enough that it allows for all pens to be able to fit straight (the previous one did not quite allow that):

But it still is reasonably flat:

The last container I tested is the 4.23 cup container: 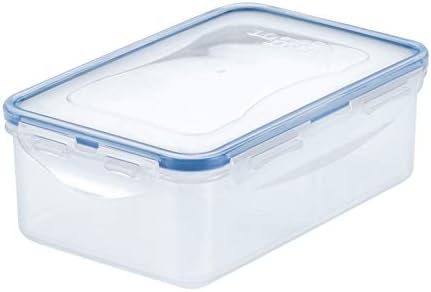 Here is how it looks with pens and cartridges inside it:

And from the side:

What are your favorite insulin storage containers?

What are your favorite insulin storage containers?

I’ve seen at least one person post a picture of like 200 vials in some container that looked similiar to one of your boxes above. I’d love to know what people use for storing insulin vials. If anyone has suggestions, I’d love to hear about it. Right now I have all of our vials in the bags we picked them up in from CVS. Also, if you do take them out of boxes, etc., do you somehow mark them to make sure they are used in FIFO (first in, first out) order?

Also, if you do take them out of boxes, etc., do you somehow mark them to make sure they are used in FIFO (first in, first out) order?

We do. We keep them all with their date of arrival and use them in FIFO order.

But – we have only been at it for 18 months, so I figure we will stop pretty soon (FIFO use): I don’t want to use only expired insulin

We have a lot of surplus insulin vials now because we’re honestly just not using it as quickly as we get it. From what I’m reading, though, expired insulin works just fine so we’re going to continue to use it in FIFO order until we run into an issue. I fear more than anything (probably like a lot of people) that, as sole income earner, if something happens to me wth will happen to Liam (all my boys for that matter, but medically important atm is Liam). So I’m going to horde everything and throw nothing away. In the event of the worst possible situation, I’ll have medical supplies to fall back on in the event I can’t work. These are the kinds of thoughts that keep me awake at night. Responsible for a family of 7 so making sure I don’t take any unnecessary risks that could put them in jeopardy.

So I’m going to horde everything and throw nothing away.

Same here. But I figure we will use un-expired insulin every day, not FIFO insulin.

I just look at the expiration date, and go by that.

I’ve seen at least one person post a picture of like 200 vials in some container that looked similiar to one of your boxes above. I’d love to know what people use for storing insulin vials. If anyone has suggestions, I’d love to hear about it.

Possibly this is the picture you saw?

But anyway, a good source for boxes like this are art supply stores and back-to-school sales. I think the ones above were meant for pens and pencils at some point. They work really well.

You have a pharmacy at your house. lol

Whatever you need. My insulin, is Liam’s insulin.

We use colored dots in half year increments to make sure we FIFO.

We use colored dots in half year increments to make sure we FIFO.

You should link this thread to your colored dot thread!

Pic of the dot system.

Can I get a close up of the paper?

So, let’s say you have more in one of the stacks than you actually use during 1/2 of a year. Say you marked 50 vials (don’t know what you use so making a huge and probably wrong guess) for “2nd half of 2019”. Then say 2020 came around and you still had 12 vials. What would you do with those?

We are using the vials at a rate so we won’t run into the problem. We currently have about 9 vials that have second half of 2019 on them. We use about 1.5 vials per month. Every quarter it seems like the new vials we receive have about a 2 year expiration on them from when they arrive.

With that said, I would, without hesitation use the expired insulin. Only when I saw that it was less effective than expected would I start to use “fresher” insulin.

A post was split to a new topic: Insurance for kids with pre-existing condition (CWDs)

The comment that @Thomas had on insurance for CWDs seemed so interesting I gave it its own thread.