The Dexcom G5 transmitter will shut off after 105 days via a software command from the receiver. But that doesn’t mean the battery is dead or that the transmitter ceases functioning. It just means that the G5 receiver will no longer accept readings from it.

So just how long will the transmitter battery last? Mine is at 123 days and still pretty strong. I’ll keep updating each week until it dies. Note that voltages and resistance are still in the excellent range after 123 days. 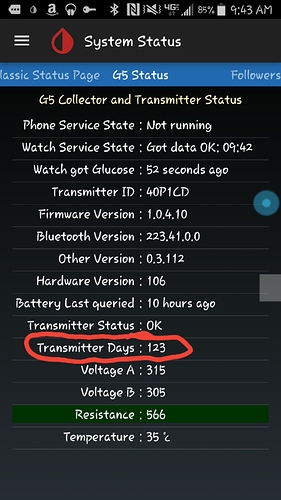 BTW, this is not possible with Dexcom receivers, standard or iPhone. This requires xDrip.

This is one of the xDrip features I’m so jealous of! I’m really debating whether we can switch to AndroidAPS and the Dana R pump because then we could a) ditch the extra piece of hardware that Samson has to carry around and b) get Xdrip – meaning no 2-hour data blackout, extra transmitter life, the works.

One random question: Is that the only font option for xDrip?

One random question: Is that the only font option for xDrip?

@TiaG xDrip just uses the default font set in your phone’s settings. So basically you can set any font you would like.

@TiaG Oh, also I’ve noticed that readings are generally a bit wonky for about an hour after I change sensors. The data is there, but I don’t trust it during that hour’s time.

yeah, but we have had quite a few times when, for instance, Samson spikes to 400 or drops to even once as low as 29!!! unless we test like every half hour during the data black out. My guess is that those extremes wouldn’t happen, even if the data was on average 50% off during that beginning period.

@TiaG Yikes! It’s certainly not that far off.
What I do when I replace a sensor is put it in and let it soak for about 3-4 hours. I use my watch as the receiver so the readings are still coming from the transmitter attached to the sensor still in place that I’m replacing.

Then after the 3-4 hour soak I removed the old sensor and install the transmitter on the new sensor, start it on my phone and tell xDrip+ that it was inserted 3-4 hours ago. That way I only have to wait 10 minutes to calibrate.

I’m still getting readings on the watch during that 10 minute period, but they are useless ( first one in 300+, second is LOW).

I can get it back on track by adding another calibration about 15-20 after the double calibration.

So just how long will the transmitter battery last? Mine is at 123 days and still pretty strong. I’ll keep updating each week until it dies. Note that voltages and resistance are still in the excellent range after 123 days.

This is one of the xDrip features I’m so jealous of!

YES! I joined the facebook group and am really starting to regret my change to an iphone a year ago. Even though I love my apple watch, the predictive pattern of the xdrip, the ability to modify alarms, and the way it extends transmitter life are enough to prompt me to hang up the iphone. Not to mention not requiring the 2 hour sensor restart on a weekly basis. It’s really unreal!

Glad you asked the font question, @TiaG. I have seen it in almost all the screenshots, so I had assumed it was the only choice. You guys don’t run xdrip? What is it you’re using?

Also, can someone clarify for me what nightscout is? It it simply the xdrip info uploaded to a cloud for better remote monitoring or is it something else?

Also, can someone clarify for me what nightscout is?

@Irish Night Scout is basically setting up your database and website to display the data. It’s certainly not necessary to use it for xDrip to work, but it is one way to get remote monitoring from any browser, and it massages the data in several different ways.

BTW, I don’t use Night Scout. But I do use the built in xDRIP+ follow capabilities so my wife can remotely see exactly the same data I have in xDRIP+ in real time.

I am amazed by all the tinkerers on that fb page! People recharging their transmitter batteries, making xdrip boxes (what are those?). So many questions!

we’re using the iphone as his receiver, edison for his openAPS.

We could switch to an Android phone and xdrip but the issue is that we have to also find a really small phone that would fit in one of his pockets – and we do want the Dexcom CGM app for people at daycare, and only a few Android devices (the large ones) are compatible. The iPhone 5s is one of the smaller phones out there and it is already taking up too much real estate on his back.

My dream is that we somehow find a way to get a Dana R pump, set up AndroidAPS and xdrip on a tiny little phone, and then do away altogether with the need for the Edison.

It would be cool if it would run on something this small.

xdrip boxes (what are those?)

@Irish The xDrip box is only needed with the G4 transmitter, because the G4 doesn’t send out a BLE signal. So the box is like a dongle that plugs into the Dexcom receiver to transmit the data to xDrip.

The G5 transmitter emits a BLE signal that is directly picked up by the phone or watch running xDrip.

It would be cool if it would run on something this small.

I don’t think it will. BLE quality is critical.
But it will run on this 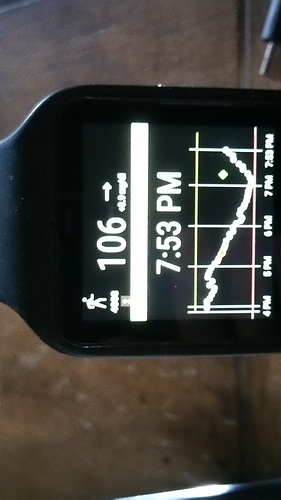 but your watch is getting data from your phone, right? So you at least need a phone that can take in Xdrip data and send it to the watch, right?

So you at least need a phone that can take in Xdrip data and send it to the watch, right?

No. I am using my watch as the receiver. It sends the data to the phone when the phone is in Bluetooth proximity of the watch. I do not need the phone for getting readings.

But, the software on the watch is not nearly as robust as that on the phone. So you really do need a phone to get the full use of the app. Also, you need the phone for upload to an affiliated remote xDrip device, Dexcom share, or Nightscout, or wherever you need to send it.

and it needs to be an Android phone, right?

and it needs to be an Android phone, right?

Battery resistance is quickly increasing. It’s up to 635 since yesterday, and around 1000 is transmitter death.

Hopefully I’ve got another week 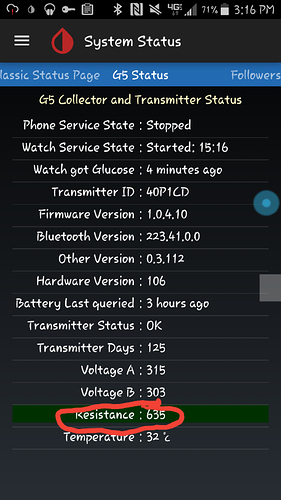 Holding tight at 130 days. Resistance seems to be fluctuating up and down in the 610-630 range. ( 1000 is transmitter death). So, how long it lasts from this point is anybody’s guess, but so far it’s almost a month past it’s preprogrammed longevity. 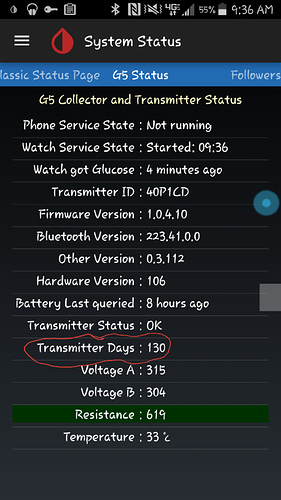 [EDIT] Just got a call frm PumpsIt, my DME provider reminding me it’s time to get new transmitters so I won’t be caught short. Little do they know…