FIASP by Novo Nordisk is supposed to be the fastest injected insulin in existence (not available in the US yet, btw): 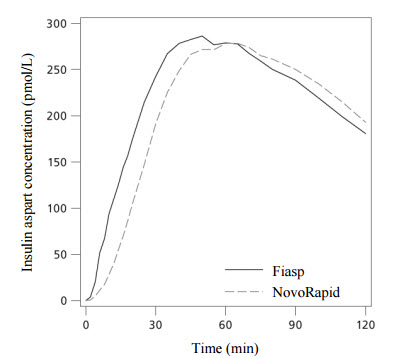 Our Canadian friends are starting to use it, and some people are putting their experience online. Tim from DiabetTech has been using it for two months:

#Fiasp two months on. Bedded in and settled down – what did I change to get...

I’ve been using Fiasp now for two months, and as discussed in the various items I’ve written, the first month proved to be a fairly dramatic bedding in period, with all sorts of strange…

Some of his previous entries:

48 hours with Fiasp. What are my first thoughts on Faster insulin Aspart?

My month with the newest kid on the block & a hypothesis on the #Fiasp effects.

Jim, @CrushingT1D on twitter, posts a cool graph, but activation appears to take a while though.

Alex O’Meara pitted FIASP against a Krispy Kreme donut – here is what he has to say:

Finally, Matthias, @ceben80 on twitter, experiments with a combination of Humalog and Fiasp, with interesting results.

A caveat: Jen is reporting problems with infusion set reactions, requiring her to change infusion sets after 24 hours or less (she often has such infusion set problems but this is worse than usual so far).

I’m tempted to drive up to Canada to score some of this contraband. And that’s a long drive from San Antonio.

I didn’t know you were from Texas!

That explains a lot

@Michel It’s worse than that, I’m a refugee from Kalifornia

The worst of both worlds! JK

Are you yearning after the weather?

Yes, but I had finally had enough. Or, more exactly, Kalifornia had finally gotten all they were ever going to get from me.

Met my wife in Austin after she finished school at Trinity. After 6 years in TX had to escape the heat. Beautiful part of the world though, especially that hill country.

A caveat: Jen is reporting problems with infusion set reactions, requiring her to change infusion sets after 24 hours or less (she often has such infusion set problems but this is worse than usual so far).

What is interesting is that Apidra, which is said to be faster than Novo or Huma, is also believed to not be as stable after several days. Not sure if that is a coincidence or if there is something to that.

I think it was on the actual Apidra insert that said is was approved for use in pumps for 48 hours, and Novo and Huma say 72 hours. Not sure if that is an actual problem, or the fact that Apidra is newer and had not gotten FDA approval for 72 hours or something.

Fiasp has been approved in the US for awhile now. I saw the rep yesterday at the Summit event in the city. Has anyone had experiences, good or bad about Fiasp?

Fiasp has been approved in the US for awhile now. I saw the rep yesterday at the Summit event in the city. Has anyone had experiences, good or bad about Fiasp?

I’ve been using Fiasp in my pump for about a year and love it. I do have infusion set issues on and off, as noted above, but they seem mostly connected to large boluses. If I can avoid large boluses (via pump, though I also split injections), then for the most part I seem okay.

I find Fiasp much faster acting than Apidra was. Though I will say I’ve never used Afrezza (being in Canada), so I don’t have that comparison to make.

I do find that my basal rates seem a bit more unstable (I have to change them more often), but I’m not sure if this is actually from Fiasp or just my body. Yesterday I took five units of Lantus to see if that might smooth things out.

I’ve been using Fiasp for MDI for a few months, with Tresiba basal, and have had good times with it. I switched from Humalog. Fiasp bolussing for me has a much quicker action and seems to have a much more predictable tail. Correction bolussing with Fiasp is very responsive and stops impending highs in their tracks.