If you are using a pen with a needle for your basal shots, something like this can be used to make sure you don’t forget.

Instead of pills, put your pen needles in the pill compartment. Then each day you will see if you have taken the needle out and used it for your basal pen.

If you get in the habit of swapping out your needle each morning or night, you will always know if you remembered to take your basal shot.

This one even has an alarm, so it’s extra helpful for reminding!! 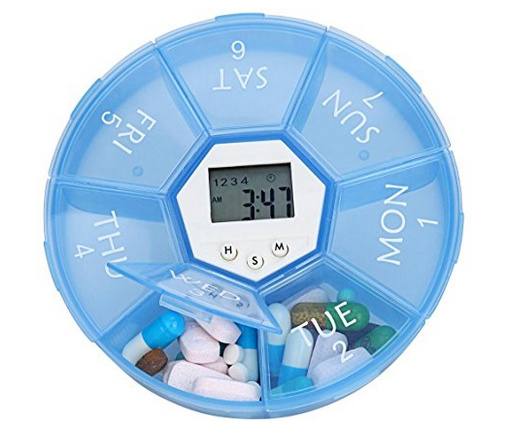 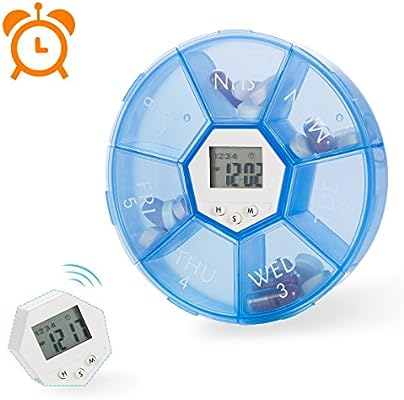 This is brilliant. Thank you!

I think as life settles into the new routine with the Toujeo basal injections being split into two different doses (wake up/sleeping) it will become more of a habit, but new habits take a while to build. (Historically, EH has never forgotten a basal dose, even with lots and lots of international travel and a generally insane schedule.)

@Eric suggested putting this by the toothbrush, and even managing to stick two needles in there as a reminder to do two doses of basal. Smart!

I use and like Timesulin—don’t have to use/carry another device, just replace the cap of the pen with it. It’s been super helpful! I had one for my Lantus and then got a new one for my Tresiba (need a different one for the different pen types). They last at least a year—haven’t had to replace one yet so not sure exactly how long.

Here’s the official product page but I ordered mine off of Amazon for about $10 I think: 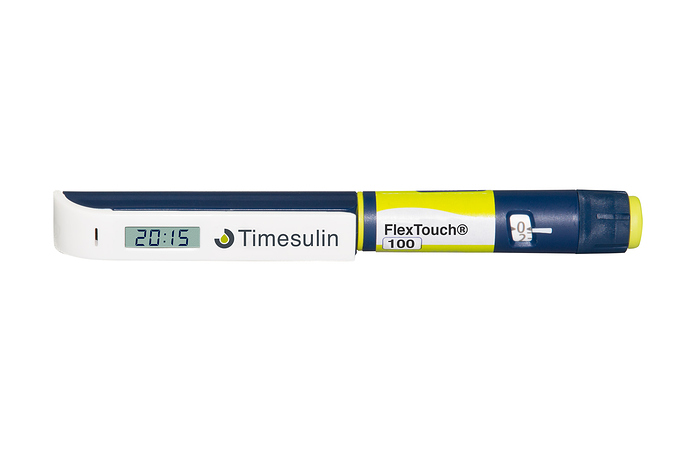 Also I combine that with an alarm on my phone and/or combining my shot with my evening pills. but it’s helpful for confirming whether I did in fact take my shot (sometimes you’re about to and get distracted or something and it’s hard to remember).

If you’re outside the US (or maybe in the US as well, not sure) and use Novo insulins, you can get the NovoPen 5 or NovoPen Echo (half units) that has a built-in timer in the lid that displays the last dose and the number of hours since that dose (up to 12 hours, I think).

you can get the NovoPen 5 or NovoPen Echo (half units) that has a built-in timer in the lid that displays the last dose and the number of hours since that dose (up to 12 hours, I think).

I have seen it for the NovoLog, but do they make it for basal insulin also? In the case of Novo that would be Levemir.

The NovoPens fit all of the Novo Nordisk penfill cartridges—Fiasp, NovoRapid, Levemir, and Tresiba (and regular and NPH, should you ever want to use those).

Also, the built-in timer is not in the lid, it’s on the end of the plunger part. I have both a NovoPen 5 and an Echo, but I only use the Echo because I’m on a pump, so I only use a shot of Fiasp when I think my pump may not be working.

Thanks! These are helpful suggestions!

And I thought Frio bags were the max as far as cool dibe gear goes! Silly me! Look at all these good ideas!

I thought Frio bags were the max as far as cool dibe gear goes!

@TravelingOn, be careful about using Frio bags in a humid climate: How well does the Frio bag work?. They are great in Arizona but won’t work in Houston

We have a bunch of those pens and we love them.

it’s gone up like crazy since they were bought by Bigfoot Biomedical, now about $25 a pop

I read that thread! (Which is probably where this reply will belong.)

Interestingly, we’ve used them extensively in Asia and India (very humid) and they’ve been fine. My guess is they technically haven’t been fine, and the high end of the insulin safety temperature rating is probably padded substantially, thus allowing the insulin that’s been kept cool but not cold to continue to work. (This is all personally gathered empirical evidence of course.)

EH isn’t as concerned about the high temperature issues as maybe he should be. His daily use Humalog lives in his pocket or his man purse (gah, can we have a thread about rad small man bags?!? Because we’ve traveled the world and tried to find the perfect thing, and it doesn’t exist.) Anyhow, the insulin is probably exposed to temperatures higher than 86° as we’ve walked from the car to the parking lot, down the street in Vegas, in our un-air conditioned house, or around town when it’s in the high 80’s etc. (thanks, global warming). He wouldn’t ever leave it in a hot car, and we’ve been pretty specific on a recent trip when we had to store our luggage (in Bali which is really hot) that it had to be kept in an air conditioned room.

I’m not suggesting to anyone that they try this at home, on themselves or their children. But we’ve found that the heat hasn’t been as big of an issue as we initially thought it would be. And the thing I love about that fact is that we’ve still been able to travel for a month at a time, hike, and do some crazy stuff that we probably wouldn’t have done if we’d been totally afraid of the temp issue.

I loved reading about your thermos solution (on that other thread) and will keep it in mind for extended outdoor in the heat travel. The issue for me always comes back to “how do I freeze that ice again?”

Also, I’ve wondered about portable refrigerators for the on-the-road purpose (when it’s a billion degrees IN the car and there’s no hotel or shop selling ice in sight, for instance) (although they are stupidly expensive, and some are flakey).

It was always like $30 retail, but I found them on Amazon for a huge discount for some reason. That said, I would have paid $25-30 or whatever, since IMO it’s worth it. But I’d recommend people shop around online in case they can also find a deal somewhere.

That’s my guess too

I’ve wondered about portable refrigerators for the on-the-road purpose (when it’s a billion degrees IN the car and there’s no hotel or shop selling ice in sight, for instance) (although they are stupidly expensive, and some are flakey).

I have been wondering about this too: there are many cases when you can’t find ice or a refrigerator (we are planning a trip into the Guatemala jungle right now, for instance) but where you can get power.

I’ve been using timesulin for my basal pen only for a few weeks now and I must admit it’s pretty great.

I have different methods which are even more simple and i think offer more for bolus timing, but for 1x or 2x daily basal, the timesulin cap is worth every penny. I got mine on eBay for about $12

Glad it’s helpful for you too! I think for some people it will likely work best in conjunction with an alarm on a phone or such (less of an issue with Tresiba though, although in some ways, increased flexibility can make it easier to forget it in entirety), but without the TImesulin, I’d find that sometimes I’d ignore my alarm or wouldn’t be able to respond right away and then be unsure if I took my basal or not.

Why/how is the timesulin cap so useful? It’s a naive question, not a rhetorical one

Because it’s super easy to forget if you’ve taken your basal shot when it’s something you do every single day. You remember taking it, but is that memory from today, yesterday, one of the hundreds of other times? You can end up being uncertain and needing to decide whether you should risk missing a shot or taking an extra shot, neither of which are good. Also if you do miss a shot, it will be super obvious next time you pick up the pen.

It hurt, it didn’t hurt, it bled, it didn’t bleed, I twisted myself into a pretzel to do it somewhere weird… I had about 50u left, was that yesterday or today? After 10,000 injections or so they just stop being memorable…

For bolus I just set my watch dive timer, just twist the bezel until the minute hand is on the zero— that’s super easy and be effective, I recommend that to anyone for bolus, but for basal it’s harder to remember

this is ingenious for those who are really devoted to hygiene and being very sterile. although i am on the pump for years now, i began my road with D on regular syringes. (what is now so commonly refered to as MDI)

i must admit that not only did i reuse needles, but i would inject right through my blue jeans or inject myself in the back seat of a taxi cab or on the bus. i did not even use alcohol wipes (ever) the only time an alcohol wipe came in contact with my body was in the endos office

i am no longer so disrespectful of my body, but that darned alcohol really does dry out my skin. and, since i am not on a CGM, i test about 20 times a day, so my poor fingertips are dry and crispy and callused. woe-iz-me