So I decided to eat Benihana and see how it went with afrezza. I have no idea how many carbs were consumed… I did not attempt to count them.

I do think that I reasonably captured in pictures a typical afrezza experience, including the delayed spike with high fat foods, so here’s the play by play

Started off at 71 when I sat down to eat. Had no idea what I was ordering or what to expect as I’d never eaten at a Benihana before. 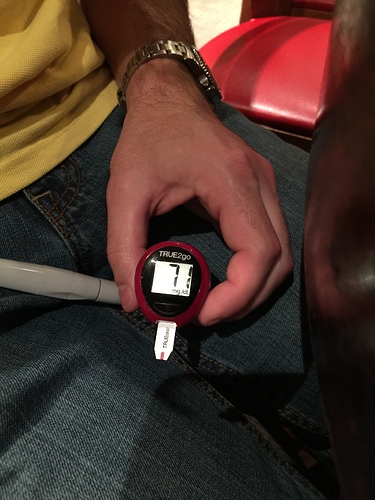 The chef comes out and does his thing which is mildly amusing and soon we are faced with a large pile of greasy fried rice, vegetables, shrimp, and filet mignon and some other garnishes. 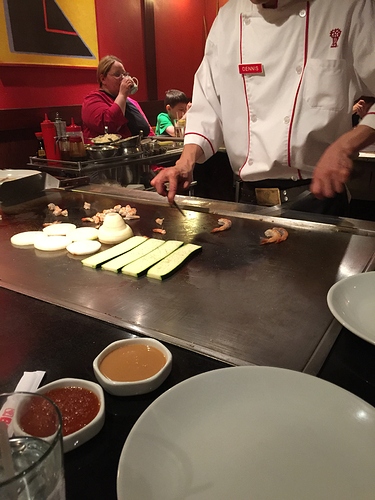 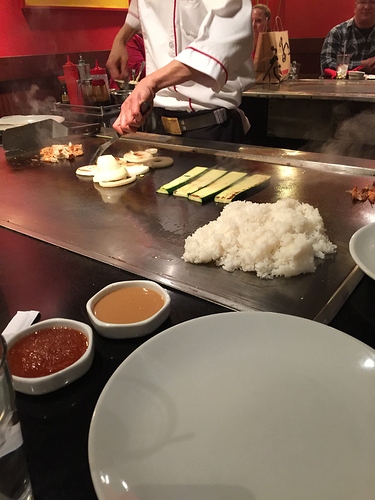 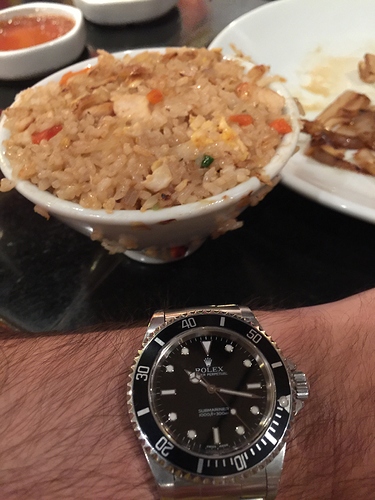 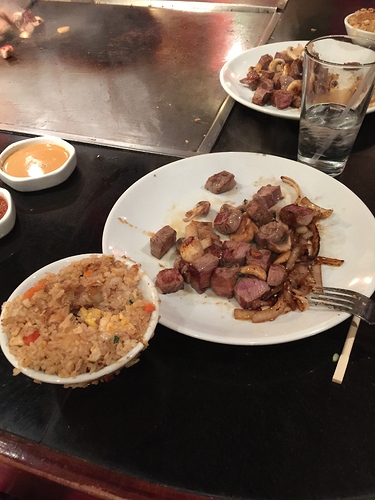 After thoroughly stuffing myself I glance at my watch, knowing from experience and many thousands of BG tests that its going to take about 20 minutes from when I started eating carbs to seeing my BG start to appreciably spike. And although I don’t really have any idea how many carbs I just ate, I know it’s a lot— so even though this is late in the evening when I’m the most insulin sensitive, I’ll start with an 8u afrezza cartridge at 20 minutes 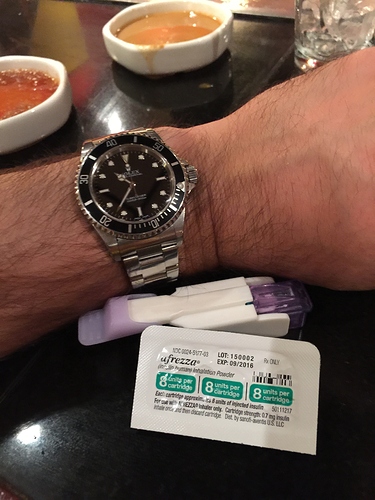 I leave my dive timer zeroed to right when I started eating the carbs-- at 1 hour my BG is 100. I know from experience that because there was a fair bit of fat and protein as well in there that this meal will digest fairly slowly, so I’m aware that there will be a spike when the afrezza wears off and I’ll keep an eye out for it. At 1:40 my BG is up to 114-- not exactly a spike yet but maybe an upward trend beginning and I know from experience that the afrezza is for all practical purposes done working at this point 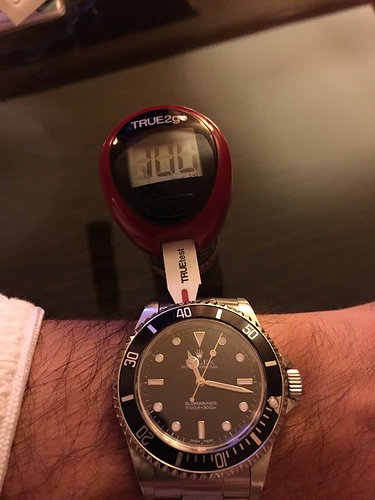 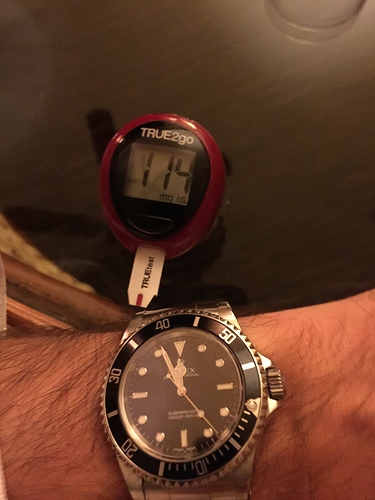 At 2:25 after I started eating carbs I check again and see BG 136. This is a clear upward trend so I know its time to head it off and I inhale another 4u. 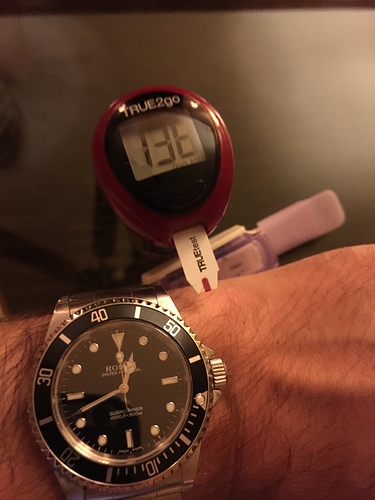 IMG_0024.JPG2448×3264 1.96 MB
At this point I’m tired and I go to bed, having just taken an afrezza correction. I know from experience that given the circumstances hypoglycemia is highly unlikely, which would be a big concern if I had agressively corrected that trend with injected insulin.

I woke up at 100 on the nose. I considered this experiment a success. Would be a much clearer picture if I had been using a cgm…

Wow! I absolutely love this post. It is basically a short story. I wish we had more people sharing illustrated stories just like this.

It’s a great post, @Sam! I would love to see a cgm comparison.

“Upper crust meets Alaska” is an excellent description of me

At some point Sam, we need to have an eating contest.

I did the same thing at the same place awhile back with Afrezza and had fantastic result also. Yes cgm makes it way easier.

Great post @Sam . The most intriguing thing to me about Afrezza is the rapid clearing leading to fewer lows.

My A1c is consistently 5.5-5.9, but I can’t seem to get SD down below 30. I’m not willing to use a pump, but I’m wondering if Afrezza would give better results than novolog.

What effect does Afrezza have on respiratory conditions like asthma? I know that they list asthma as a contraindication, but I assume that’s because of absorption. Haven’t seen anything about Afrezza exacerbating asthma.

Also, I take sometimes more than 100 units of novolog per day. How would this transfer to Afrezza? Do higher doses cause problems not found with lower doses?

Maybe you or one of our other Afrezza experts could get a wiki going on it.

Like you said I think its counterindicated for asthma, but I don’t know all the finer points of those considerations and such… if its something you’re interested in I’d discuss it with a doctor who’s familiar with prescribing it…

100u of novolog/ day is quite a lot more than I use so I’m not sure regarding ow much you’d use… it seems as a general rule of thumb that people end up using more afrezza than any of the rapid injected… just because its just opening up the cells for a brief window of time, so if your BG is going to tend to be elevated for a longer period, you’re going to need to do it more often than with a longer lasting bolus…

As to standard deviation compared to other bolus insulins, it’s hard to say, everyone is different. If I’m very strict about what I eat and disciplined with prebolusing etc I can probably maintain just as good of control with novolog… but I can have very good control quite a bit easier with afrezza. I still use novolog quite a bit too, but for spontaneous situations, new and different foods, etc afrezza is light years ahead. 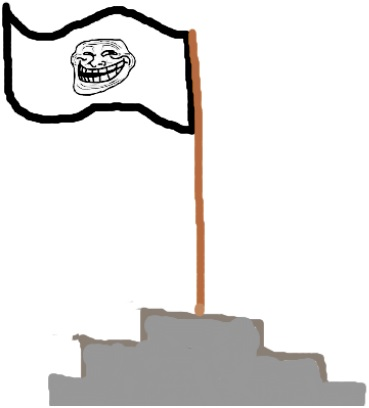 The most intriguing thing to me about Afrezza is the rapid clearing leading to fewer lows.

This is absolutely one of these best things about Afrezza. The rapid clearing gives me tremendous piece of mind to aggressively treat with Afrezza.

I will do something similar with my CGM. Anyone have any requests on what food to eat? Nothing too crazy

oh and @Sam that Rolex is

Wasn’t the Rolex the focus of the thread?

Wasn’t the Rolex the focus of the thread?

No! Take your kids to medieval times!