My 9yo son is moving from the Libre Freestyle to the Dexcom G6 next weekend.

So I’m trying to source a phone to act as a monitoring point.

The phone is going to spend almost of it’s time in my son’s diabetes kit, or plugged in near his bed - so all we need is a phone that can connect to the G6 & send data to the cloud.

I’ve just been through a bunch of old Android phones I had lying around & none of them are compatible with the app.

Looking at the Dexcom website (I live in New Zealand) gives me the following: https://www.dexcom.com/en-NZ/compatibility/dexcom-g6-app

Which is mostly the Samsung S series, the LG G series or the Google Pixel.

These are all nice phones, but expensive overkill for something that’s basically a Bluetooth to Wifi/4G relay. Schools have “no phones” policies over here & my son is 9yo, so he’s not going to be using a smartphone like a smartphone for a few years.

I’m trying to work out if the compatibility criteria is:

Does anyone know what the story is with Dexcom G6 to Android phone compatibility?

I think the best fallback will be to buy an older Samsung S series - as compatibility goes all the way back to the S5.

Check this for possible solution, but may be only US.

Here is one from another forum, with instructions for G6 and supports international.

My daughter and I have Android Samsung S9+ phones. Her Dexcom g6 app is working fine. My dexcom g6 follow app stopped working about a month to a month and a half ago when an update occurred. Now instead of the alarm going off when she is high or...

I am guessing that a used Apple SE might be one of the cheaper options, but if you’re dead set on Android, I think a lot of the phones listed *say they don’t work but actually do. I’m not sure how to figure that out.

Yeah, I’m sticking with Android for the time being. I didn’t enjoy my Apple user experience - it was like being in an abusive relationship with someone who is always right & was only interested in my money.

A bit of digging shows I can can get some slightly older refurbished phones (like the Google Pixel 3) for a few hundred dollars, which isn’t too bad.

For anyone who stumbles across this while searching for the answer:

I’ve done quite a bit of testing with various phones/ friends phones etc.

As far as I can tell the Dexcom G6 app will only work on the phones listed in compatibility section of their website.

In the end a friend donated a LG G7 they had spare. It’s a USD$300/NZD$450 phone - so very lucky to have supportive/ generous friends.

While I’m not adverse to spending good money on good technology I can’t help feeling like Dexcom’s testing regimen is missing the part of the market that just want a simple Bluetooth to Wifi/4G relay.

@Tama There are several threads on Reddit that cater to this need and remove the Play store restrictions from the official Dexcom app. Below is a link to an International version. 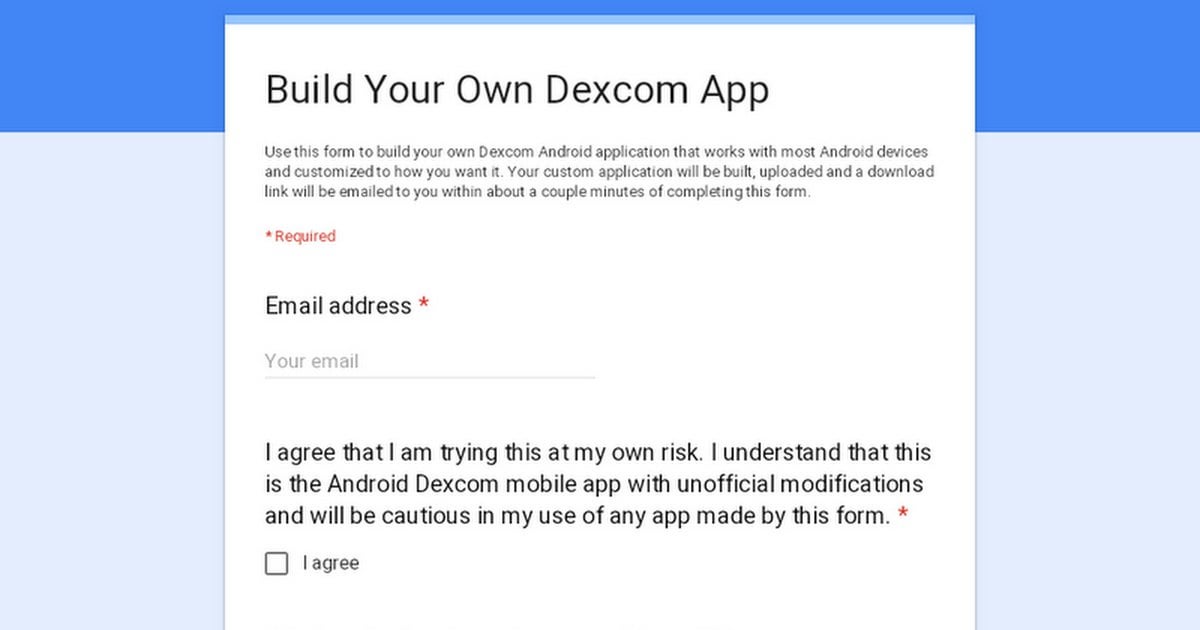 and an alternative here;

Build Your Own Dexcom App

Use this form to build your own Dexcom Android application that works with most Android devices and customized to how you want it. Your custom application will be built, uploaded and a download link will be emailed to you within about a few minutes...