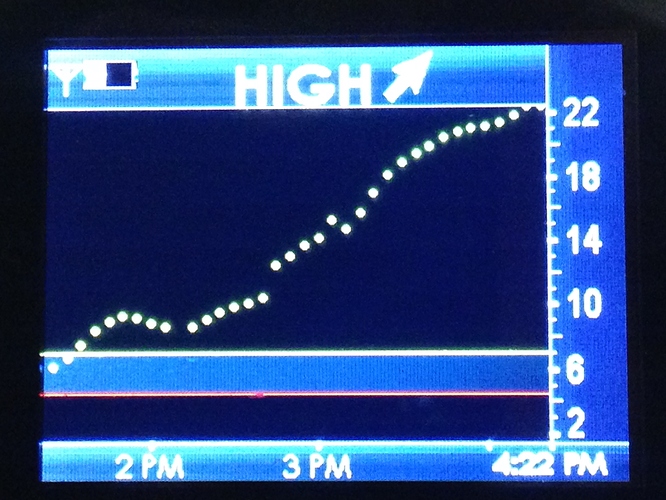 Disconnected way too long for my shower?
Bad pump site or insulin?
Two bee/wasp stings that woke me up?
Imitation maple syrup I had was secretly real?
Stressing unconsciousy about my upcoming trip?
Thyroid is going out of whack again?
Diabetes just hates me today?
All of the above???

Not to sound crazy, but did you do a finger stick to make sure your sensor was still working properly? (I figure you did!)

EH has had some wild BG lately, and we’ve identified altitude being an issue (California Coast to higher than Denver, CO and it caused some major insulin resistance). But now that we are back down again his sensor has been off by somewhere between 30-80 points. Haven’t solved that one yet.

(Sorry about the wasp stings, that sucks!)

Have you tried to bring it back down?

For me that would be like eating 63g of carb and not bolusing.

I think your diabetes is mad about something.

This would spook me.

We see peaks these days (puberty peaks), but much lower: ours typically top off between 180 [10mmol/L] and 250 [14 mmol/L] although they sometimes go higher.

Good chance it is several things!

EH has had some wild BG lately, and we’ve identified altitude being an issue

I replied to someone about altitude at some point. I gotta track that info down and put it up. Altitude can work both ways, making you lower or higher, so it is tricky.

Not to sound crazy, but did you do a finger stick to make sure your sensor was still working properly? (I figure you did!)

Yep, checked three times with my meter because I didn’t believe it (though I do feel high).

Have you tried to bring it back down?

Took insulin (via pump) about 45 minutes ago. If I’d been thinking, I would’ve done an IM injection!

We see peaks these days (puberty peaks), but much lower: ours typically top off between 180 [10mmol/L] and 250 [14 mmol/L] although they sometimes go higher.

The only other time I’ve seen utterly crazy spikes like this is when my thyroid was hyper (I’m on medication to slow it down now). I’ve had other symptoms, so I’m wondering about that, but I had blood work a month ago and it was fine. I’m beginning to wonder whether thyroid level can vary day by day like blood sugar does.

Of course this is when insulin takes foreeeever to kick in…!

I think I read all five threads I found on FUD about the altitude component. But linking them here would be nice, now that I’ve mentioned it (and unintentionally hijacked @Jen’s thread).

I think discussions are organic and am not one of those people that thinks they need to stay in the same theme at all times!

I think I read all five threads I found on FUD about the altitude component. But linking them here would be nice,

I just put this one together real quick. We should combine stuff at some point! Sorry to be unorganized.

Sorry, a very quick post, scrabbled together from some other times I posted on the subject. When your body adjusts to higher altitudes, it has to cope with the lower oxygen levels that are at higher altitudes. This can cause the body to release the stress hormone cortisol, which helps your body cope with the lower oxygen levels. Stress hormones can cause a rise in blood sugar levels. Cortisol increases blood sugar through gluconeogenesis. The opposite effect is that at higher altitudes our…

EH wants to know what you put the imitation maple syrup on? Maybe there were hidey carbs?

He also adds about the crazy spike and resultant slow insulin response: yah, that happens to me sometimes.

Have you changed from a generic to name brand medicine or introduced any new medications? We’ve been wondering about this lately (although the Doc says it doesn’t matter…)

It does really sound like it might be all of the things – getting stung is stressful, disconnected for the shower, travel planning, and maybe thyroid, all stuff stacking up…seems like you’re doing the right things now! Sorry you’re feeling crummy in the meantime.

The maple syrup was on supposedly low-carb pancakes made with coconut and almond flour.

The only new medication is metformin about two weeks ago…which is supposed to lower blood sugar.

Blood sugar has been more unstable than usual lately. So, yeah, probably a combination of things. But I’m heading into an internship where I need to be super stable, so the instability is just stressing me out even more!

So I’m pretty sure hormones (which I didn’t list above) is a major contributor to my problems of the past few days. I looked back on my past 24 hours and virtually all of it has been out of range (high with one low). I increased my basal rates by 0.2 u/hr yesterday evening (a little more than a 10% increase in basal for me) and still ran high all night, waking up at around 10 mmol/L (180 mg/dl). I’ll increase further today. I was hoping metformin would stop this crazy rollercoaster, but so far it appears it’s having no effect.

@Jen, ugh that’s so frustrating! I wish there were a way to predict those hormone peaks. Maybe one day we’ll all have smartwatches that take microsamples of our sweat and can find things like cortisol and other hormones that cause insulin resistance.

Did the blood sugar come down eventually?

Jen, sorry to hear about your issues bringing down highs. Since my son is still in the heavy growth phases of life (14) we experience these very often. They are difficult to manage because sometimes they take a little insulin (less than standard correction), and other times they take a ton of insulin (up to 3X the standard correction dose). All of this is very frustrating. I hope it evens out for you soon.

Did the blood sugar come down eventually?

I’m still high at this point. Usually to take care of this I have to raise all my basal rates by 30-50% and lower my carb and correction factors (I’d already lowered my correction factor from 1:2.5 to 1:2.0, but since corrections aren’t doing much, I’ll lower it to 1:1.5). My endocrinologist says that these highs are caused by progesterone. If these things were predictable and I knew that on X day I had to change my settings by Z amount that would simplify things so much! I was hoping that metformin would help, and maybe it’ll have more of an effect when I raise the dose to 2,000 mg, but so far it’s been disappointing.

You definitely need to come down…by whatever means necessary. Being so high for such a prolonged time isn’t good. I If it were Liam, I would bolus the heck out of him to get that to come down…however much it took. If you mess with the basal just remember what it was so that you can set it back when you’re back to normal - it’s often time-consuming to get those rates set.

You definitely need to come down…by whatever means necessary. Being so high for such a prolonged time isn’t good.

Oh, sorry, I mean that I have come down, but I’m just not within my target range yet, Running between 8-10 all night. I’ve been correcting every few hours, and just put my basal up by another 0.2 u/hr and hour or so ago. Usually this type of thing lasts a week or two and then I crash low-low-low and have to set everything back. It’s the primary reason I don’t bother to really do any serious basal testing (though I do “test” it if I happen to skip meals or eat late just in the course of my day). At most, a basal rate only lasts two to three weeks for me before it needs to be changed.

Part of what makes this so freakin’ difficult is that often in an attempt to be aggressive I’m too aggressive and end up low. Such a tough balancing act to get right when things are not consistent in terms of timing or the amount insulin needs to be adjusted. I remember on another site @Sam posted a topic about men and women having different diabetes outcomes in terms of mobidity and mortality and we had a discussion about why this might be. Well, I think this right here is the reason since it happens every single month for like 30 years! That’s gotta have some effect on overall level of control and risk of complications (sadly).

We’re all pulling for you and hoping this rough patch passes soon!