Phenomenal medscape presentation on inhaled insulin and benefits of faster insulin. I’m still listening to it now (and it’s quite long) so comments to follow. Worth a listen. I would consider this must hear material for anyone whose ever been interested in benefits of faster insulin of any kind particularly inhaled insulin
http://www.medscape.org/viewarticle/878755?src=soc_tw_diab_mscpedu_9am

It must be the Medscape setup: if you access the link from Twitter they let you in, otherwise they ask for pwd:(

I’ll retweet it a few times over the next couple of days. A good opportunity for all of you guys to follow us on Twitter!

It’s not a bad idea to become a Medscape subscriber btw – it’s free.

Who are the medical professionals on the video? Anyone we’d know?

Medscape is a very frequent source of information in which members here would be intertested. Membership is free and easy to obtain, and I would encourage all here to sign up.

I’d heard of Dr Bruce Bode in Atlanta before, the others I hadn’t heard from but was impressed with all. It’s interesting to hear because they’re physicians and the discussion is directed toward other physicians so you get an inside look at some of their perspective with things like patient compliance etc…

When I look at the conflicts of interest disclosures, here is the run-down:

So this is a very legit review, which should be very unbiased on the whole – very cool. In fact, I believe that, in most states, physicians can receive continuing education credits for viewing this video.

in most states, physicians can receive continuing education credits for viewing this video

Wish more of them would do so. Did you listen to the whole thing?

Not yet, no time today – we had a major flooding event overnight, and there is a thick layer of water in my basement. Just spent 8 hours hauling everything I can out of there… Not how I’d like to spend the weekend

3 posts were split to a new topic: Darn flood – and no time for forum

@Gus, the transcript is GREAT, thank you! I am reading it right now. I will put a few small snippets online in this thread.

“Dr. Bode: The problem is most people (ENDOs) out there, never give this (AFREZZA) an option. They worry about the pulmonary safety opinion. They never worried about pulmonary safety, but that’s their job. Their job is to make sure that whatever medication you give that that it’s safe. And there’s clearly, from Lung Biologists and Pulmonologists and Oncologists, the (AFREZZA) is safe.”

“Dr. Jeremy Pettus
The only thing I’ve noticed, is that people, when they first start to do these dramatic inhalations, they suck vigorously and really, I feel that they can produce a cough. But it really does not take a lot of force. It’s more a calm, kind of like gentle inhalation and still get the amount of material. Like Bruce said, I wanted to say, most people used, you will most likely cough for the 1st or 2nd time, but then it goes away.
Dr. Janet McGill
Yeah, you read e-mails. People do overdo, you’re right. Have them calm down a little bit. Aim (inhaler) that it does not hit the top ( of the mouth)…(aim for the throat).”

“Dr. Janet McGill
"We use it (AFREZZA) also on our exercisers, who really cannot handle a tail on their insulin. Some of them are wearing some pumps and use the inhaled insulin (AFREZZA) for both meals and corrections, because the tail effect is a big problem for them.”

“Question: Safety of Inhaled Insulin (AFREZZA)
Reply: Dr. Bruce Bode: One thing, I think, is the safety. Most ENDOs won’t prescribe because of the safety. I have been around enough of these lung biologists and experts, because I’ve been involved with them for the last 10 years. They’ll convince you “it’s perfectly safe”. And the other thing, this drop of 40 mililiters, it’s like me sitting here and I go back like this, I drop 40 mililiters of my FEV1 by just lying down. That’s less that one per cent, one and a half per cent of your FEV1 overall. Lung Function: That’s the safety. But that’s hard for people to get over.”

"Question: Give the latest post marketing data on lung cancer:
Dr. Bode, Reply: “As far as I know, there’s no reported (cases). The ones who had lung cancer, there were a total of four, 2 during and 2 afterwards. These people - 2 of them had long standing history of smoking. One person only used it (AFREZZA) a very short time, less than a few weeks.”

They’ll convince you “it’s perfectly safe”. And the other thing, this drop of 40 mililiters, it’s like me sitting here and I go back like this, I drop 40 mililiters of my FEV1 by just lying down. That’s less that one per cen

@Sam Thanks for the link, excellent presentation.
First thing I’m going to ask my endo for at my next visit is an FEV1 to see if I can take Afrezza even with my mild to moderate asthma.

Sam, agree with you. Much more information if one actually listens to the whole program (compared with just reviewing the summary). And as Michael has pointed out, registration with Medscape Education is free. It took me just one minute to register for an account. Below is the twitter message from Medscape itself on this presentation. I think the audio quality of this linked broadcast is better than the one I provided above. 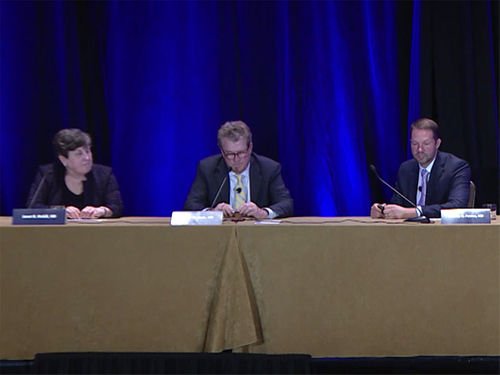 Inhaled #Insulin: Reaching for the Stars in #PPG Control with Dr. Pettus, Dr. Bode, and Dr. McGill https://t.co/Fs7pGm5i2L
1 Like
next page →