Well, in the great peanut butter cup experiment it appeared that the frozen insulin still worked, although its action curve was slowed. So it was suggested that we try again without administering food, to see what action the insulin had.

We waited for a reasonably flat period, we were at 165 for about 45 minutes, and we administered 4 units of previously frozen and thawed Humalog. As you can see in the resulting Dexcom tracing, the insulin still works. It does appear to us to have a slightly elongated action time as compared to unfrozen Humalog, but it still works.

Our son should have needed 36 carbs to offset “fresh” insulin, and that is what it took to come out of the lows. 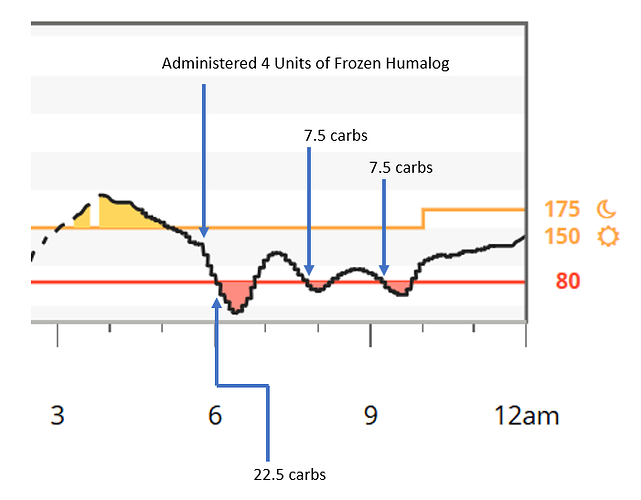 So, our conclusion is that if you have an emergency, and access to once frozen insulin, go for it, but test often.

As you can see in the resulting Dexcom tracing, the insulin still works. It does appear to us to have a slightly elongated action time as compared to unfrozen Humalog, but it still works.

@Chris, what am AMAZING experiment! The result is totally unexpected to me. This is absolutely shocking. I am truly excited about what you found.

Kudos to you and the boy! You advanced the science of the thing – no doubt about it.

I guess I should duplicate your experiment with Novolog and see how that works. What exactly was the freezing part of the experiment?

We put it in the freezer for a couple of weeks until we were sure it was frozen. We froze the last 10 units or so left in a vial (a small volume), then when you pull it out you can see it has frozen into a block. Pull it out, sit at room temperature until it thaws, draw some up, and give it a shot.

@Chris, remind me – are you guys on MDI or pump?

We are currently meeting 50% of my son’s basal with Lantus, and the remaining basal and bolus needs with a pump. That allows him to be disconnected from his pump for long periods of time (baseball games and tournament weekends).

He uses a Tandem pump. We tried the Omnipods, and may try again for the next tournament, but in each case they have malfunctioned after contact during a game.

Do you find that the Lantus lasts the duration? We are finding out that my son’s Lantus is starting to run out a little early these days.

Hard to say really, we have the Lantus set to let his BG slowly drift upward, which is counteracted a bit by the exercise. He probably grabs his pump and injects between inning once every other game.

His pump basal is set pretty different day/night, so we could easily be covering up any lantus shortcomings, with extra pump basal at night. (We inject in the morning). What this has allowed him to do, is exercise disconnected from his pump for 12+ hours in a day, without having to think about his diabetes much except between innings. It is also much more comfortable to exercise without the equipment on.

I re-validated the frozen insulin thing this morning. I put the vial in the freezer when this thread first came out - June 2017. It was in the freezer 10 months and it was completely frozen solid, not just a little bit slushy. A total block of ice! (it was a vial of NovoLog, BTW)

My pod expired at 7am, and I had no basal insulin since that time. You can see the BG climbing. I took the formerly frozen insulin at 9:13 am

And then I drank some coffee w/ sugar to stop the silliness. 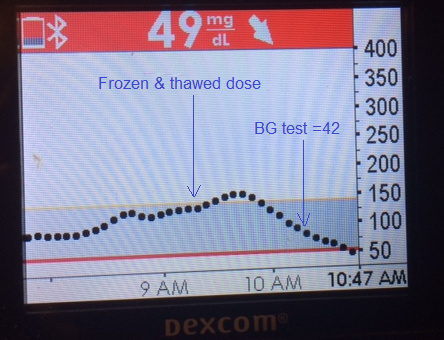 The absolute validation for me is the fact that I had no basal since earlier in the morning, no pod running, and no other insulin but the formerly frozen NovoLog. And the result was unquestionable.

My @Eric, that is awesome! Proving that both Novolog and Humalog can survive freezing! Plus to have yours frozen for so long is great as well.

My fear of overtemping or freezing is going away completely. I am sure there is some temperature where insulin becomes inactive, but it isn’t going to happen in most places.

So why all the precautions about temperatures if they’re essentially BS?

Were they valid at some other time in history ?

Probably they were valid precautions with the previous generation, and the companies didn’t want to pay to change the labelling. There is a lot of prior art in drug and device submissions. As long as you don’t change much the FDA doesn’t look too hard at it.

@Chris,
I put my vial back in the freezer. I figured - why not check it again after a re-freeze. Anyway, after a few months if I either remember it or run across it in the freezer when hunting for food, I’ll do it again and try the double frozen and thawed stuff…

Was this in a refrigerator/ freezer combo? Or in a deep freezer?

It was in a fridge freezer. Didn’t seem to bother it too much.

Thanks @Eric for trying this out! We’ve had success with “overheating” insulin and allowing it to be used - worked fine. I was concerned with freezing, but now I will be less concerned.

Hi - this is my first time to post here (I’ve “introduced” myself, but that was different. I’ve been greatly interested in this discussion - in fact, I found it on a google search and is how I found this forum. Please bear with me as I am also new to forums in general.

My husband and I work in Papua New Guinea and the closest place for me to purchase insulin is from Australia. To save hassle, I often bring enough insulin to get me through our term. However, this term is being extended another year. Someone kindly brought me some insulin, but along the way, before it reached me, it was placed in a freezer for roughly 48 hours before it was noticed and then put in the refrigerator.

Since we didn’t have a lot of options, we chose to try the insulin - see if it would work. It’s all short-acting (I do MDI with LA and SA insulins). It seemed to work - as reported earlier. I was grateful to find these forums, as it bolstered my courage. However, we are finding that the longer acting time is making it difficult to cover meals well. Reminds me of the days when I relied on NPH and Regular - just not nearly as smooth as I would like. My body can tell the difference. Too many roller coaster rides.

We are now in the process of trying to get replacement insulin out of Australia.

Thanks for the research and the reporting. I hope this isn’t too long!

@Carol, sorry to hear that your insulin supply was frozen. That is indeed not the best, but glad that our thread helped you.

It is also interesting to hear that you found the same thing, i.e. the action curve is affected.

I was quite surprised to find that in the end it covered exactly how many carbs we thought it would, although we also found that it took more time for that to happen.

Do you also find that it is covering the correct amount of carbs for the units taken, but that that the action of the insulin appears delayed? Or do you find that it is overall less effective.

Your post was definitely not too long, there are some terrifically long posts in our world, but yours is not one of them!