So I just found out that the tslim pump has Bluetooth and after downloading the tslim app to my phone, I was able to sync most of my pump data to my phone! Now I can see my insulin onboard on my phone! So, in a search for better health I’d love to see this data, directly on my watch.

I don’t have a smart watch yet but I’d like to receive the Dexcom signal directly to the watch and pump so that I can leave my phone at home if I choose to. I’m looking into a blue jay watch.

Has anyone been able to extract info from a tslim pump to a watch being that the platform is available to send through Bluetooth and an app is out there for phone use. Thx for reading 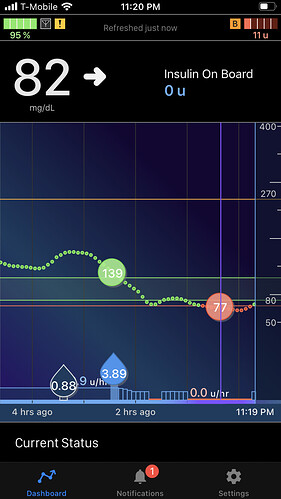 Has anyone been able to extract info from a tslim pump to a watch being that the platform is available to send through Bluetooth and an app is out there for phone use. Thx for reading

I don’t believe so. Later this year Tandem is going to deliver the ability to bolus from the tconnect app. So I’m sure the tconnect app and bluetooth is locked down pretty tight.

The Blue Jay watch will read it from the Dexcom transmitter itself, not the pump.
The hard part is that the watch doesn’t switch back and forth well when it or the phone is trying to read the transmitter from the second (phone) slot.
NEVER setup the watch to read from the pump slot on the transmitter if you have a pump connected to it (if you don’t have a pump, it works great connecting to the pump slot.)
I got frustrated trying to get the watch to stay connected to the transmitter, AND send data over to the phone when it was back in range.
I haven’t messed with my BlueJay watch in some time now though. Maybe he has figured a few things out by now.

i am looking at the Blue Jay watch. I would love the functionality of the Finowatch. I am brand new to this tech stuff so still not familiar witll all of the conectivity. Idealy I would like to find a way to connect an android format watch to an iphone

The dexcom transmitter has two bluetooth channels.
One is the pump channel.
The second is for a receiver, phone, etc.

The BlueJay watch is one of the few that lets you choose which channel you want to connect to.

The big keyword for a watch to work as a stand alone is that it must act as a collector. Most watches will only parrot off what the phone is getting (usually xdrip based.) The Sony SW3 works as a collector right out of the box, but is a dated and old watch. Others will work after updating firmware.

And while the Bluejay watch is pretty neat, it really only serves the purpose of collecting from the Dexcom transmitter. And telling time.
All settings for the watch are manipulated through xdrip. This takes a little getting used to!

I hate to say this, but one of the things that truly bug me is ALL of these watches have very poor battery life. You are constantly messing with them to keep them working as a collector for the transmitter, and you are always making a compromise with functionality, form, battery life, etc. etc. etc.

ALL of these watches have very poor battery life

Unfortunately I think this is a limitation of the battery tech currently being employed. I also think this is why the Apple Watch acting as collector is vaporware, since apple won’t deploy tech that reduces the life of their very expensive watch, and I am sure after the demonstrations that their further testing meant no standalone Apple Watch connection to Dex.

I am perfectly fine with only BGL and time on the watch but with the technology available, more would be appreciated. With the Blue Jay as an option as a collector, I have also read that the Finowatch (android) is able to be used as a collector.

So, can the android finowatch/bluejay be used as primary collector, send data to an app(probably would need to be an android platform) of which my iphone and my wifes iphone can be authorized viewers? Being that my pump will read, and the watch will read (hopefully) I am not extremely worried about connectivity on the phone. However, I would like to be able to have the reading on my watch as a primary connector.

I work in an emergency room and with Lead aprons on, PPE, being highly mobile through the department does not always make accessibility to my pump or phone realistic and a watch makes perfect since. However, if I leave my phone on the desk and am doing CPR I have no access unless I rip off my ppe as of now. Time for a stand alone watch collector.

My specific hope was to use the bluejay as the collector, and have the phone (xdrip) get the data from the watch when it is close.
This CAN work, and when it does, it’s beautiful!
But, I had lots of problems keeping it working.
The Sony watch actually did better at this. But I could only go so long before it would go out of sync, or some other nonsense. And that was a used watch, so battery life was poor to start with. You can replace the battery in the Sony SW3, but I haven’t changed mine yet.

I haven’t checked in on the updates for the Bluejay watch in a while, I need to see if there are some updates for that. I went back to my normal watch and xdrip on my phone. And just looking at my Tandem pump to see the BG number and graph when I need to. I wear a spibelt, so I can stretch the material a little and read the pump screen fairly easy without taking it out. This saves a lot of time for quick checks, or to give a bolus from. I really only take it out when changing sets, or if I am in really bright sunlight and I can’t read some small text on it.

Yeah, battery life on almost all smart watches is pretty dismal at best.
I have a Samsung Galaxy S3 watch that has a really good battery life.
I got the watch to work for mirroring data from the phone’s xdrip, but even that had issues.
It is hard to put so much time, effort and money into a watch and not have it work well, last even a DAY on a charge, etc.

Btw, the Bluejay watch is actually very cheap. So it isn’t too much of a loss, money wise, to check out and see if it works for you.

yes I was highly drawn to the cost. Found a few sonys for less, but as you mentioned, they are a bit older.

If i use the watch as a collector, then i lose the ability to monitor on phone unless i set up all of these other apps like xdrip etc correct? can xdrip be run on the iphone? I see conflicting reports

You loose ALL phone access if you use the watch as a collector. The transmitter has a very hard time when two of anything are trying to access the same channel. It doesn’t play well in this arena.

Oh, and I really did NOT like having to plug the sony watch in. My Galaxy watch is simple magnetic/wireless. Which makes all the more sense!

I use the Bluejay watch, loaded with Xdrip core, as a standalone collector on one of the G6 BT channels and the other channel sends to the T Slim X2. 50% of the time I don’t or can’t carry a phone. I do have xdrip+ and tconnect mobile app on my phone. The bluejay is able to store many hours of data and then back fills to the phone when it’s back in BT range. I have used the same setup with the Sony sw3 but it doesn’t backfill consistently and it’s battery life is much shorter then the blue jay plus it’s smaller than the sw3. The xdrip on my phone cloud uploads to tidepool which combines the pump and Bg data for my endo.

What build is your watch on? I think this has been one of the biggest differences between people having good/bad luck with it.
I like the backfill option the Bluejay offers. It kills the battery a little faster, but not really that big of a deal.
And the Bluejay at least has a magnetic attachment for the charging.