Something’s up with my Interstitial Fluid: Looking for answers and starting with basics... what is insulin resistance? And can it affect IF Glucose?

In fact, if you had led off with, “get yourself to a calorie-tracker website”, we could’ve skipped right over that last little exchange…

Turns out they are out there…

Will that work?? Can i just track this stuff for a couple of days and give you something from that?

I had to track my eating for a week and calculate daily calories and percentages of carbs, fat, and protein for a nutrition course. I just wrote down everything I ate w/nutrient values, tallied up the number of calories (for the day) and grams of carbs, fat, and protein eaten. Then you take those grams and convert to percentages:
For carbs/protein, multiply by 4 and divide by number of calories (then multiple by 100 to get a percentage)
For fat, multiple by 9 instead; everything else is the same.

ETA: that sounds so complicated and like a lot of work, but I promise it isn’t. I had fun doing it, even

Took me 2 minutes on a website… so i take back whatever i may have admitted there over the last couple of posts… confessions made during distress are stricken from the record.

Is this what you want?? Because this (plus another coffee… or 2) is what a typical day looks like. 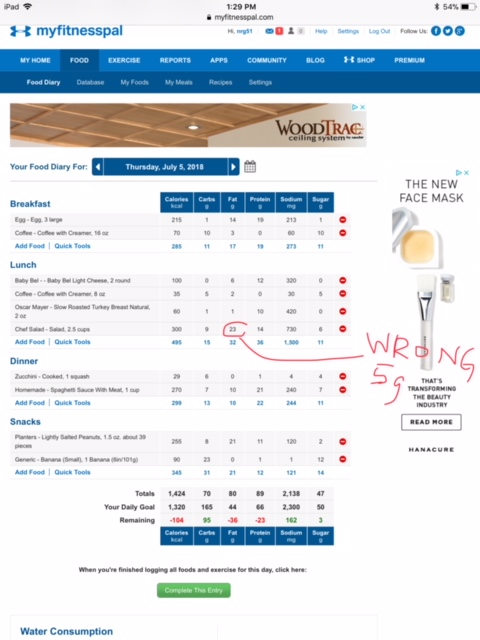 That is the ONLY part of your message that made it into my brain… everything else just bounced off my eyeballs.

I tried a very lazy and cheesy shortcut just now… just dumping a few generics into an online calorie tracker… and we’ll see if it passes the test (Eric’s approval). It won’t, and I already know that, so I will start up a log and start collecting info and then will sit with your post at the end of it all. And hope something gets through.

Will that work?? Can i just track this stuff for a couple of days and give you something from that?

This isn’t one of those things where people shake their head at you and chastise you for not eating properly. It is just useful for you to know what your diet looks like.

Really, it’s useful for anyone, not just T1D’s.

The myfitnesspal site works fine. Whatever you think makes it easier.

And Emily (@Pianoplayer7008) has experience doing this, so maybe she can offer advice on it too.

So, using that makes things so much easier than when I was taking that course (which was in high school, so @Eric, not sure how much advice I’ll remember

). I had to look up every bit of food individually… Using the numbers from the screenshot:

One thought I had after seeing these numbers - have you been eating this much fat with these few carbs for a while now, or does it happen to coincide with the rising numbers you’ve seen? I was reminded of this thread. I know you’re not quite that low carb, but perhaps eating so few calories, and most of them from fat, are increasing insulin resistance? Another possibility, if you had been eating more carbs and less fat before - maybe what you’re seeing are the delayed rises from fat? Thoughts, Eric? As this is totally out of my realm of experience…

One thought I had after seeing these numbers - have you been eating this much fat with these few carbs for a while now, or does it happen to coincide with the rising numbers you’ve seen? I was reminded of this thread. I know you’re not quite that low carb, but perhaps eating so few calories, and most of them from fat, are increasing insulin resistance? Another possibility, if you had been eating more carbs and less fat before - maybe what you’re seeing are the delayed rises from fat? Thoughts, Eric? As this is totally out of my realm of experience…

I think you are making very good points. But we just need to keep in mind that this is only one day, so it would take a few days to get a better idea if this represents an “average” day.

I might want to adjust those a bit. But those are definitely better than saying “zero carbs”, or doing 50% fat!

So yes, smart advice Emily, thanks for that and for the description of how to do it.

DN, can you do this for a few days? I think it would be helpful for you.

just dumping a few generics into an online calorie tracker…

Oh wait a minute, was this just a demo? Not a real day for you?

If so, never mind about the percentages I commented on. Let’s see what is real for you.

Ha, if I missed that, too, ignore everything I’ve said.

They were all very good points you made. All valid for the numbers that were shown!

No, this was real! The only thing that was wrong was the fat content on the chef salad… it automatically put it as having 25 g of carbs. That’s not what my salad is like. I have 5g of fat tops…

Ignoring nothing… those are real numbers except for the chef salad 25g… that’s more like 5g of fat. I’m with my kids right now, but I was going to respond to these posts as soon as I’m done.

I edited my percentage to reflect fat without the salad, though that would also lower the total caloric value (thus changing all the percentages), but I think it’s accurate enough without changing the calories to still give an idea for one day’s numbers.

Why are you so nice?? Thank you very much. I didn’t mean for people to be calculating my calorie totals for me… though I COULD use the help, as evident my earlier freakout. I was just trying to put up what I had to see if it was good enough…

So, thank you. Again.

Haha, you’re welcome. As I said, I actually enjoy the math…

And I’m someone who needs visual examples to get something, so I always like to show a real example of something I’m trying to explain to someone…

All good stuff for me to learn…but I’m distracted by “DN” vs “Nicky”…what did I miss?

And your real example is going to be how I attempt to calculate tomorrow’s stuff. Before I just post it again, freak out, and try to trick someone else into calculating it.

DN… short for “Darling Nikki”— if you know Prince’s song?

️ So I think I’m Darling Nicky here and think that’s very cute. But it’s one thing for other people to call you cute things and another thing to refer to yourself as it in a thread title. Not as cute. So I sat for many minutes deciding on Darling? Could I put a twist on it and go with Darn instead? And then I realized I was losing precious minutes of my life… so DN.

Your thread is cracking me up, until I got to the sanctioned food shaming bit above with the diabetes educators and whatnot. Then I felt pissed for you.

FYI, here at FUD I really feel like food shaming is not a thing. Sure sometimes it feels like folks might be for or against carbs, depending on the thread. But then there’s threads like:

The gauntlet was thrown in this thread: can we find a way to accommodate banana splits and milk shakes? So, here is my thought: log in this thread your dosage and BG track for a banana split or a milkshake! Let’s see if we can find dosing formulas that work well with some members or groups! Imho, just trying shows the right spirit

So enjoy those chocolate chips. No one is judging.

I think everyone wants to help each other be eating what they want and having success at that.