I had a doctor appointment today with my retina specialist and I mentioned that I was a runner. He warned that running anything over 20 miles a week can shorten one’s life span. I was shocked, and hugely disheartened to hear this from a doctor. Later, I googled, “running over 20 miles per week bad”, and sure enough there are several articles/studies stating that it could indeed be bad for one’s health. Something to do with excessive, intense exercise killing off the free radicals which in turn, causes oxidation and plaque to build up in the arteries (atherosclerosis) and damage the heart (fibrosis).

Will Running Too Much Kill You?

The annual look at the current state of the evidence.

What to Know About Running and Your Heart

We’ve all seen the scary headlines. Here’s the truth behind the hype.

I know for me, I feel lousy when I don’t run; I don’t when I do run over 20 miles / week. I have a runner friend who has been running, and winning, extreme ultra races and expeditions for 20+ years and is still doing them.

What are your thoughts on this “research”?

What are your thoughts on this “research”?

My instinct is that it’s like most “research” about lifestyle and dietary strategies in that there is probably far more that should be included in the discussion than is. It’s like the research on cholesterol that keeps changing. I have a feeling there is more in our genetics at play than there is just the set amount of eggs that makes how many eggs we eat okay. That sounded like a Dr. Seuss “advanced reader” line. My point is, if I can find it, is that I would, no pun intended, take it with a grain of salt. My dad ran more than 20 miles a week for probably 40 years. My gut tells me he probably would’ve been a lot better off if he had continued down that road than the road he ended up on, which was full of poor lifestyle choices, medication, and other health problems.

Neither one of those links you posted actually support the theory. That study has been debunked for years.

Any study can be twisted if you look at one factor and don’t compare all the other things involved.

Look at this one instead:

Conclusions
Our data (1) suggest that substantial health benefits occur at exercise levels that exceed current minimum guidelines and (2) do not exhibit a point of diminishing return to the health benefits of running at any distance less than 80 km/wk.

Official guidelines from the Centers for Disease Control and Prevention and the American College of Sports Medicine state that every adult should accumulate 30 minutes or more of moderate-intensity physical activity on most, preferably all, days of...

These types of recommendations are dumb.

I had a doctor appointment today with my retina specialist and I mentioned that I was a runner. He warned that running anything over 20 miles a week can shorten one’s life span.

It’s like them telling you to keep your A1C above 6.

Come on, please put this silliness out of your mind and go run today.

Usually, these things are exaggerated, if research has shown any effect at all. Media too often misrepresent study results. Nuanced results don’t make good headlines, I guess.

So glad to hear your replies! I’m of the same opinion but I felt so deflated after my doctor said this. He is an ophthalmologist, not a cardiologist, so certainly not an expert in the field, but I do have high regard for his competency with my eye issues. I felt he wanted to persuade me not to run, and harp on negative thoughts.

It’s like them telling you to keep your A1C above 6.

This was my EXACT first thought when my dr mentioned this about running!! Always negative, I guess that is why I got so upset.

Oh, no, sorry! I know what you mean. My Afghan hound was on this for months for pain after her disc was removed and it made her sedated, sort of out of it

I hope you feel better.

Yes, I found a lot of those when googling for this, too

I didn’t read the studies posted by @Eric but my instinct is that people who are running over 20 miles/week suddenly after maybe not running at all could temporarily be at some increased risk, but if you get to the point where you feel good and it’s enjoyable, it’s sort of hard for me to imagine. Of course, there’s no science behind “I can’t imagine.” But still, I can’t imagine. Twenty miles a week just isn’t that much; it’s pretty easy to get above that just by losing track of time.

It’s hardly surprising articles in Runners World magazine (for runners) would not support the thesis that too much running could be bad for you. And the study Eric posted of “Relationship of Running Per Week” study is quite old, published in 1997. Furthermore, that paper used cholesterol and other CHD risk factors as defined in 1997 (again pretty old), and not actual mortality statistics.

I was curious so found this article from 2015 that seems to be one of the sources of the data that Runners World is referring to: Dose of jogging and long-term mortality: the Copenhagen City Heart Study

The abstract states: “The findings suggest a U-shaped association between all-cause mortality and dose of jogging as calibrated by pace, quantity, and frequency of jogging. Light and moderate joggers have lower mortality than sedentary nonjoggers, whereas strenuous joggers have a mortality rate not statistically different from that of the sedentary group”. It includes this chart: 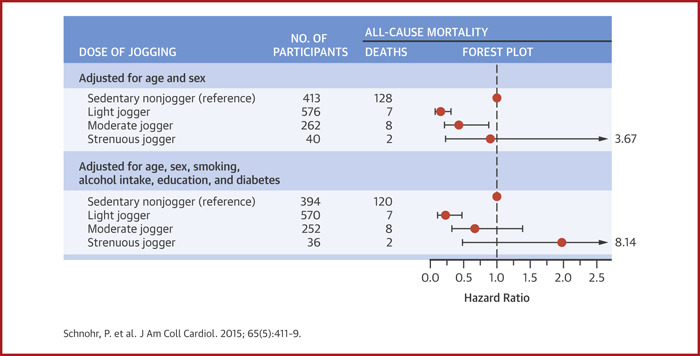 Furthermore, there are clearly good benefits to exercise of all kinds, especially for us diabetics. And there is no “hard limit” like 20 miles a week that is considered too much - the paper has rather flexible definitions of light, moderate, and strenuous jogger categories that I don’t think many if any of the readers on this site are likely to exceed.

So personally, I do exercise every week and have since I was first diagnosed with T1. I run, use a rowing machine, play squash, shovel snow, strenuous yard work, whatever depending on the weather, and feel better when I do and have seen only advantages. The benefits of exercise are clear from their chart by comparing light and moderate exercisers to Sedentary subjects.

My takeaway is that something like spending decades training for competitive ultramarathons may not be the best thing for you - OK, that could shorten your lifespan. But that kind of training is usually self-limiting because of injuries anyway, not to mention the crazy time commitment necessary. Once again, all things in moderation (like your Mom used to say) seems the best advice. In my opinion running a few times a week, and not to the point where you are injuring yourself or you need to force yourself out the door, would be included in the definition of moderation.

Twenty miles a week just isn’t that much

Totally agree, and I like the comment on distinguishing someone who is already unaccustomed to long runs. :-:

feel better when I do and have seen only advantages.

Me, too!! Thank you for describing your views. It was just disappointing for my eye doctor, someone I respect, to warn me not to run more than 20 miles! As Eric said, it was like my endo telling me to increase my a1c. Just a let down