I have noticed I have trouble any time I eat salad. I think I’m choosing something healthy, and even if it includes some carbs like tortilla chips or croutons, and I take a normal dose of about 7-8 units novolog, my blood sugar runs crazy high. My husband thinks I am taking too much insulin and my liver is putting out extra sugar. He wants me to try the same salad and less insulin. It’s very frustrating to run 400 when you skipped fries and had a big salad instead.

@Pates, welcome to the forum, so glad you joined! I really look forward to reading more of your posts. Do consider introducing yourself on the welcome thread!

It’s very frustrating to run 400 when you skipped fries and had a big salad instead.

Goodness gracious, lettuce takes you up to 400?

Let me correct that statement. I had a fish sandwich, took off half the bun, handful of potato chips, and a salad, and my blood sugar was 400 after a normal bonus for that many carbs. Anytime I have salad though in order to cut carbs, it does not seem to benefit me. Anyone else find that salads run them high?

my blood sugar was 400 after a normal bonus for that many carbs.

Where did you start from? Was the 400 post-prandial (2 hours after the meal)?

Also - do you inject ahead of the meal or do you eat right after injecting?

Could you be having extra carbs in the dressing that you’re not aware of? Some dressings are super sweet. Or maybe some other ingredient? Salads themselves don’t spike me and can be excellent meal choices for me since they often cause a slower rise, but that’s also because I rarely consume any simple carbs (no croutons, bread etc) with mine. Other sources of carbs to be sure to cover in salads: beets (very high in sugar), beans, grains, dried fruit (very sugar dense), fresh fruit… carb counts can definitely sneak up on you.

I have noticed I have trouble any time I eat salad. I think I’m choosing something healthy, and even if it includes some carbs like tortilla chips or croutons, and I take a normal dose of about 7-8 units novolog, my blood sugar runs crazy high.

If your blood sugar is too high, you need more insulin.

There’s lots of room for investigation and looking into details and strategies, but it can be helpful in dealing with big spikes to start with the basics: when you eat, you need to take enough insulin, and you need it soon enough for it to have time to work.

For this kind of salad it appears that you need significantly more insulin than you took. Maybe there are more carbs than you thought, or maybe your insulin to carb ratio is off, or maybe you had some extra insulin resistance because of something else going on. Maybe pre-bolusing earlier would help. But you shouldn’t have to go to 400 or even 250 when you eat a salad, so it’s something worth working on and we’d all be happy to talk about it more. And if you are getting spikes to the 300s and 400s when eating, a good CDE or endo who is expert in diabetes could also be a helpful resource.

Other sources of carbs to be sure to cover in salads

Boy, that’s the truth. I had a chicken salad salad from Pot Belly and took a bolus dose calculated from the carbs from Fat Secret. The salad had dried cranberries. Bg went up like a rocket and I was fighting it all night.

A few weeks later I had the same salad minus the dried cranberries, took the appropriate bolus and I was fighting a stubborn hypo all night.

Gah! Those delicious carb-bombs are showing up in everything lately!

When I ate that meal I started at 260 blood sugar and took 9 units. My
blood sugar was 400 two hours post prandial. I sometimes inject before if I
know what I am going to eat, but sometimes I eat, then inject immediately
after.

@Pates, are you on MDI (Multiple daily injections) or a pump?

If you inject after or when eating I would not be surprised to see a large temporary rise after you eat, because glucose typically gets absorbed faster than insulin acts.

For my son, insulin starts acting strongly in about 45 minutes but high GI sugars act in about 5-10. So we calculate the carbs for his meal 45 minutes ahead, wait until he turns the corner, then eat. It is easy to do if you have a CGM (Dexcom). If you don’t, you can experiment to see how long it takes for your insulin to act, then once you know eat that much time after you inject.

But when I see him as high as 260 I would be a bit worried. Was that a sick peak possibly? We try to make sure that he eats only when he is below 120 and going down.

Sorry for asking all these questions. Sometimes it can be hard to make suggestions without knowing enough

Hope you had a great New year!

@Pates, this is not a great example since my son was somewhat out of range, but below is an example of what I mean for prebolus before meal, for my son’s dinner today: 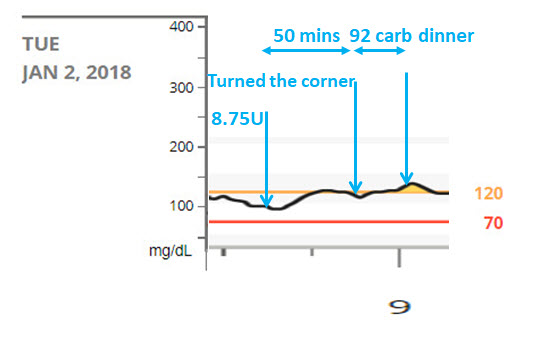 My son was at swim practice until 7:15pm. He injected 8.75U around 7:25pm. We waited about 50 minutes until he had turned the corner, going down below 120. Then he ate a very large carb meal (to make up for all the carbs he had used up swimming).

This is not a very good example because he was out of range before and after eating. You will also note that he slightly underdosed his dinner: he had to take an extra insulin bolus after dinner to go back to around 100.

But the principle is still good overall:

Sometime in the next few days I will try to capture a better meal track that is not corrupted by crazy sports activity.

Was the 8.75 units just for dinner, or did that also include make-up for missed basal during swimming?

It was just for dinner. He had already injected makeup insulin 20 minutes prior to the end of practice when restarting his basal.

Also, @Eric the bump before dinner is due to his taking an immediate carb drink right after practice. He did not dose quite enough or early for it: he injected for the drink 20 minutes before the end of practice.

i learned this the hard way b/c i love salads too and could not imagine my life without them. first off, cheese in saladds will increase you BG. secondly, there is sugar in salad dressing (even vinegar has sugar in it, Balsamic especially ) but processed dressings always have sugar in them. if you add nuts, more carbs, carrots, more sugar and carbs, and then the fiber itself can cause BG rise.

after much experimentation, i found that if i want cheese (gorgenzola, especially) and walnuts in my salad and make my own Balsamic dijon vinegrette dressing, i account for 16 gms of carbs and do an extened bolus of 1 hour to 1.5 hours ( a dual bolus of 50/50% ) it works like a charm.

PS: adding chips (loaded with carbs ) or a handful of crutons could be your culprit.

Thank you! Since I read this I have been trying to remember to dose before eating, even 15 min before. I have the most trouble when eating out, whether it be salad, sandwich, even doing my best to estimate carbs or look them up. Im not on a pump. I take Treseiba and no Olof.

And thank you Daisymae for the input on salad. Too many hidden carbs and I think you are correct about the fiber. Going back to my husband suspecting I’m taking too much insulin with the fiber content and my liver may be putting out sugar to compensate…I have experienced better numbers when I add some “bad” carbs with my salad like a handful of fries or a 1/4 of his sandwich. Maybe he’s right?? Has anyone else experienced overdoing insulin over time having the reverse effect? I will continue to experiment.

I have the most trouble when eating out, whether it be salad, sandwich, even doing my best to estimate carbs or look them up.

We do too: it is really hard to time everything well and to estimate precisely.

Going back to my husband suspecting I’m taking too much insulin with the fiber content and my liver may be putting out sugar to compensate…I have experienced better numbers when I add some “bad” carbs with my salad like a handful of fries or a 1/4 of his sandwich. Maybe he’s right?? Has anyone else experienced overdoing insulin over time having the reverse effect?

Every week I run into more incredible examples of how different PWDs react radically differently to stimuli that I feel should be universal. So who knows? But I am very doubtful. I think it is much more likely that you are misestimating the carbs in the salads, possibly the dressing? When we eat out at a fast food and I order salad, I often get a plastic dose of sauce, and, when I read the carbs, often it is 20-30 carbs! Loaded with sugar

So I would be more ready to believe that, when you eat just a salad and dose for a very low amount of carbs, if you make a mistake for instance on the sauce, the percentage error will be very high, but if you have a higher amount of carbs for which you dose, your error will be much lower in relation to the full dose, and may possibly be compensated by a slight natural overdose from your ICR.

So, specifically for salads, it would be interesting to see if you have the same problem when you cook at home and know exactly what is inside your dressing and ingredients.

The other thought I had, for the example you gave above, was: is the chicken you ate breaded? Did you account for all the carbs in the chicken breading and the fries?

Finally, as a note, for us French fries are very hard to dose because the mix of carb and fat is difficult, and fat often cause a delayed peak hours after the meal.

The other thought I had, for the example you gave above, was: is the chicken you ate breaded? Did you account for all the carbs in the chicken breading and the fries?

Even if the chicken isn’t breaded, if the salad is from a restaurant and especially if it’s from a fast-food place, chances are that it has added carbs/sugar. Lots of places add starches and other carbs to their “plain” chicken. The only way to know is to ask for the ingredients and/or nutritional information. (I only know this because I have a severe potato allergy, and potato starch is often added to chicken, so I always have to ask.)

Agreed with @Jen—when I eat at places with nutritional info and get something like a salad, inevitably the amount of carbs is higher than it would have been if I made it myself. If I can’t get the carb count, I usually pad my typical estimate with some extra “restaurant carbs” and that often works out well for me. I always round up when eating out.