bkh, does your screen work like this? Because I don’t find it to be a lot more keystrokes. But that could just be my threshold is different than yours. 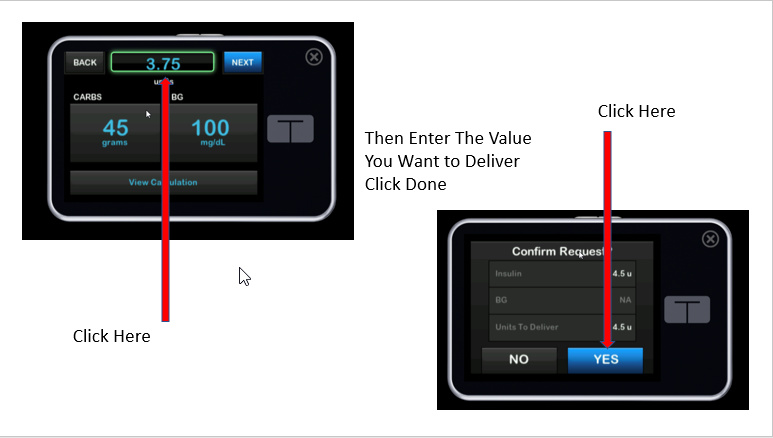 Chris, Thanks for the reply. Very much appreciated !!!

My screen looks like yours. So let’s count keystrokes.

When I want to bolus before eating, I press (1) (2) (3) to unlock, then press on BOLUS to get to the Bolus Screen that you show. The starting configuration of that screen is as follows. In the “units” box you highlighted in green it shows 0, in the box where you show 45 grams it shows 0 grams, and in the box where you show 100 mg/dL it shows “Add BG”. Suppose I want to bolus for 20g carb and my BG is 120. The “right way” is press on the 0 grams (to switch to the grams entry screen,) then press 2, 0, Done to get back to this screen. Next press on the Add BG box to switch to the mg/dL entry screen, then press 1, 2, 0, Done, then if I have IOB press CLOSE on the IOB warning screen, which returns me to the Bolus Screen. Then press Next, then in the Confirm Request screen press YES, then on the Deliver Bolus screen press Deliver. That was 17 keystrokes.

But I probably would not have entered the 6 keystrokes to starting with “Add BG,” instead I would have just entered 25 g rather than 20 g, which is not exact but it is close enough, and it reduces the command from 17 keystrokes down to 11, which to me is significant. And in fact, I probably would have skipped entering the carbs too. I probably would have just done (1) (2) (3), Bolus, Units, 5, Done, YES, Deliver, which is 9 keystrokes; about half of the 17 that it took to do it properly. 5 units isn’t exactly the right dose, it’s a little too high, but it’s close enough to work fine, and I find the 17 keystrokes required to do it “properly” to be unnecessarily tedious.

But that’s just me. I grant that you and Thomas are quite reasonable in asserting that 17 keystrokes is no big burden, it only takes 20 seconds or so.

it is just of the multiple systems we tried, the Tandem was by far the least number of keystrokes

I can bolus with 8 button pushes with OmniPod. That was the fewest of all the ones I looked at.

You can actually bolus with far less using the button with the Tandem, but to enter the bolus is in fact 9 keystrokes, although in my mind the first three to unlock are a bit mindless.

There are two of those with OmniPod. The power on, and the confirm which is like the 123.

Has anyone counted the latest Medtronic offering?

although in my mind the first three to unlock are a bit mindless.

@Chris - With the Animas was it the pump itself or the remote which you make mention of? I almost never used the pump interface as I was using the meter/remote almost exclusively. I really miss that remote!!! Particularly at nighttime, having the Animas remote was so nice. (We had the Animas Ping.)

We never saw the remote, just the pump. It just seemed like a lot of conformations when we were playing with it. We almost went with it because of the waterproof-ness, but the operation was tough.

@Chris
Oh - I misunderstood. I thought you previously had the Animas. But it sounds like you just handled it like in a Doc or Rep’s office while trying to decide which pump to get?

The Animas Ping was nice. Like anything else, the screens on the pump took a bit to get used to but my T1 had them memorized and would click through them like a squirrel on speed. I was almost always using the meter remote. Particularly with a child, being able to use a remote for the pump at night instead of having to dig through the blankets looking for the pump was awesome.

In terms of waterproof, I still have no idea why Tandem won’t advertise the pump as waterproof. Technically nothing is waterPROOF. Drop any pump into the Mariana Trench and the water will kill it before it hits the bottom. But the Tandem pump is tested/certified/whatever at 3 feet for 30 minutes (I think) but the biggest thing for me is I called Tandem Customer Support and specifically asked them about pump replacement under warranty for water damage. They said they would replace the pump for any water damage. To me, that effectively is water proof at least for the limited water type activities we do such as kayaking.

But I wouldn’t call it easier for myself, and it certainly took much longer, and was generally a nuisance when I knew the PDM could have done most of the “work” for me in a flash. Whether you start from the PDM’s suggestion or do it in your head, you still arrive at Dose X and then adjust for The Variables In Life. I found using the PDM is not necessarily more accurate or otherwise “better,” just a lot quicker.

@Beacher, I believe this may simply be due to the fact that one is faster with an accustomed routine. What takes by far the longest for us is to get the full carb info. We cook almost every meal from scratch, and we are hardly ever able to reproduce a full meal. So, gathering all the carb info can be tedious, sometimes up to 10 minutes. But, on the other hand, once you have the total carbs and look at the BG, the result is almost instantaneous.

Here is an example:

Total calculation about 35 seconds, negligible next to the time it takes to calculate the carbs. The bulk of the time is not due to calculations but to evaluating decision parameters.

Total calculation about 35 seconds, negligible next to the time it takes to calculate the carbs. The bulk of the time is not due to calculations but to the evaluating decision parameters.

Completely agree. At least for us also.

I can bolus with 8 button pushes with OmniPod.

Is there an option to just enter a bolus amount without all the other “stuff” like carbs and BG numbers?

That is 8 keystrokes plus the strokes for the number of units.

The t:slim supports a “quick bolus” function that can be pre-set to deliver insulin (a fixed number of units or for a fixed number of carbs) and it can be repeated to multiply that dose, but I have not used this feature.

That’s not bad. Essentially that’s how I do all mine, just enter the amount of units and none of the other stuff.

So, gathering all the carb info can be tedious, sometimes up to 10 minutes […] The bulk of the time is not due to calculations but to evaluating decision parameters.

I agree absolutely. The majority of our meals are also from scratch and most of my time goes into the carb counting. I’m sure I’d be much faster at dose calculations if I did it in my head more often. But you and your son, along with most of the human race, are faster at math than I am. It is not my forte. Which is probably why I prefer to have a machine do it for me.

A post was merged into an existing topic: Difficulty calibrating my dexcom

I don’t know if this is terrible, but we rarely do this in-depth of a calculation on a meal anymore. Our meals are also much less elaborate but Samson also will rarely eat a predetermined portion of anything. So it’s all eyeballing and guesstimation. I have wondered if explaining Fermian estimation might be useful for some with Type 1 – I find I’m using those skills a lot in different form.

By the way, welcome back! Hope the move went well.