Today I did my first Tough Mudder 5K. It was fun and I want to go back (hopefully for a Classic). As far as D is concerned, it went mostly well, but I did have some misadventures as well: because of the mud and water, and the obstacles, I found it harder to plan for than a regular running race.

Tough Mudders are obstacle races, where the obstacles are like those in a military boot camp—with an emphasis on a lot of mud and water. Yesterday morning, a good runner friend told me about a Tough Mudder race in Sonoma (about 45 minutes away) this weekend, so I decided to go and try it out. As I had never done one before, I thought I would try the shortest course, a 5K: I figured nothing much can happen in a 5K as far as D is concerned. Another friend on my cross country team agreed to do it with me: this is a collaborative race where you help others go through the course, and going as a team is best!

Planning for the race

This was a last minute decision, on Saturday afternoon for Sunday morning. Once I had booked my ticket, I planned my D strategy. Since it had a bunch of water and mud, I thought I could not take any electronics with me. I use Omniloop, so I planned to go open-loop with a constant but low basal some time before the start: I figured going to 35% basal (i.e. -65%) 45 minutes before the start, and starting a little high, around 150 if possible.

As for food and water:

I did not quite have the perfect gear for the race. I picked a cheap pair of trail running shoes, some short synthetic running socks, and quick-dry shorts and T-shirt, with no sunglasses. I double bagged 2 tubes of 30 Skittles to give me 60 carbs in my pocket.

We arrived at the Sonoma Race Track more than 45 minutes early: that was perfect. At 8:30am, 45 minutes before the race, when I looked at my BG curve I was unhappy, as Loop had been able to bring me back to 125, coming down sharply. I took my basal down to 0.35U/hr (from my 0.95 regular level) and switched to open loop, to stop all corrections, then I gave all my electronics and my dry clothes bag to my parents. I decided to eat a full banana with no correction, expecting that it would carry me bring me back up to 150 or so at the start.

Around 8:50am, my friend and I went to the holding area where they keep all the racers that start in the next 45 minutes. I had decided to be in the 9:15 batch, so as to wait 45 minutes after I had lowered my basal to 0.35. At 9:10, they released us to the starting line. On the way there, my mom, who was on the sideline, mentioned to me that I was only at 100 but roughly steady:

That was disappointing. I decided that I would be very careful about how I felt as I went through the run, and that I would look for more carbs in one of the snack stations.

At the start, a pitch man gave us a truly cult-like speech about Tough Mudder, and asked us to all congregate in a very small area. I would have been more comfortable social distancing… There were about 70-80 starters. After the national anthem, we all took off:

My friend and I decided to start at a conservative pace and see how well we would hold up. We found out that we were able to keep up with the best in running, but that we were slower in the obstacles. In part, this was because we did not really know how to deal with them—but, also, there were some seriously buff competitors in the batch. So we accelerated our pace so as to make up running what we lost in the obstacles. To give you an idea, here is an example of an obstacle: (this one consists of rows of muddy ditches):

I am the guy in the light blue shirt, and my friend is a few feet to my left. We are in the first group of competitors to get there.

I had decided to avoid the electroshock obstacle, because I thought it would fry my transmitter, but my mom, who was at the obstacle I just showed, suggested I take off my sensor and transmitter to be able to get shocked. When I lifted my shirt, I realized I had already lost both in my past struggles through previous obstacles… I still had my pod, but with only a few hours to go, so I decided I would go through the electroshock afer all:-)

I felt really good running, and did not feel low. I kept on looking for a snack station but it turned out that none of them had carbs—I felt that I would still be OK with the carbs in my pocket. We kept pace with another team of 2 young men, really buff, with whom we ended up collaborating to the very end. We arrived first of the batch to what we thought was the finish, and started congratulating each other while the other team’s girlfriends were taking pictures.

A few minutes later, my mom and dad caught up with us and announced to us that we had not finished yet: we had gotten lost, and missed the very last obstacle and finish line. So all four of us rushed back down the hill, found the race course again, and raced to the finish line through the electroshock obstacle. When we got there, we found out that we were still first in the batch

We hosed ourselves off and changed into dry clothes. A half hour after the finish, we got to the car, where I was able to do my first BG test:

119! I was quite happy, as I figured that I was going up since the finish, since my basal had been so low: I must have been around 100 at the finish, with no carbs taken along the course! Of course, that was all mostly luck. FYI, the meter shows no active pod because my phone is paired to my pod, not my PDM.

A couple of hours later, I went into a major BG peak to 275, and realized that my pod canula had come off, probably over one of the last obstacles.

So, here are some of my lessons learned:

What I can do next time: I figure I may need to overpatch and horsetape both Dexcom and pod—or, alternatively, to take off at least the sensor before I start.

I am now thinking I’d like to do a full Tough Mudder Classic next time: they are 8-10 miles long, so it will be much harder to figure out the right D strategy. The mud and water obstacles, and the friction you undergo in others, make this challenging for modern D gear!

Wow, that was a tough run!! Losing sensor and transmitter and disconnecting the pod, too, to boot! The run looked fun though, but maybe not so much the rows of muddy ditches!! You prepared well and did super well, for your first Mudder!!! Congratulations!! I’m so impressed how you were able to end with a 119 BG, with no lows and no carbs!! That banana really did the trick, I think!! Great call!! I really appreciate you describing the details of prep from previous evening, breakfast, and morning strategy for D. This will be helpful for all of us interested in running and other intense activities!!!

Another great piece by @Kaelan, but, I was looking for the post race, pre wash picture.

This looks like a running version of cyclocross. I know I am a nut about bicycling, but here’s a video of the Cyclocross Worlds 2017. 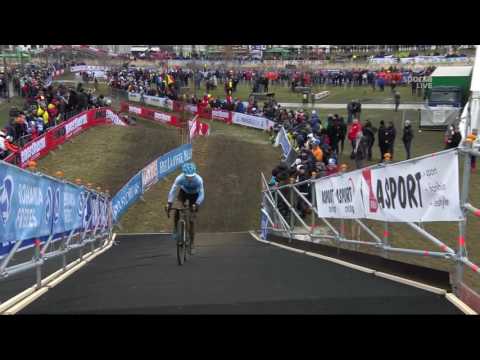 Not in English, but you can get a sense of the excitement.

Of course, that was all mostly luck.

Luck is the residue of design.

Would it make any sense to forego all the electronic attachments you have for the time of the race?

Biking is my intensive exercise, and I will often leave my pump at home when I go out. My doctor thinks I should keep it on all the time, but when you’re exercising the basal rate can push you low.

Glad you didn’t go low, but surprised that there weren’t any carbs at the rest stations.

Thanks so much, @Trying! I think you would have done better than me, you are hard core!

That banana really did the trick

I think so too—I am glad I brought some with me to the start.

appreciate you describing the details of prep from previous evening, breakfast, and morning strategy

I really like it when people do that: it’s the hardest part of a sport event I think. I would have liked to have found that info before doing it, but I searched and couldn’t find any T1D review for it online.

I was looking for the post race, pre wash picture.

@CarlosLuis, that is the picture, sorry to disappoint you! One of the very last obstacles was a swim, so it washed off most of the mud except for my face

Supercool video, thanks a lot!

Luck is the residue of design.

forego all the electronic attachments

I thought of that. But my sensor was only 2 days old, it costs about $100, and I only get 3 per month, so I was reluctant. Retrospectively, it would have saved my transmitter.

I will often leave my pump at home when I go out.

Makes sense. For me, I use Omnipod, so I have to trash a pod (i.e. canula + plastic tank + abt 200U of insulin) when I take it off. Also, w Omnipod I can keep on running the basal I want even without a phone or PDM. The only sport when I go to 0% basal is intense swim training, for everything else I have some basal, so it is helpful if I can keep my pod on.

Although, if I ran super long run races like @Eric it looks like I would do the same (no basal), from what @Eric has written about his amazing marathons and other races (like when he ran 5 races in 24 hours…). If I am able to get rid of shin splints for good I plan on trying.

If I am able to get rid of shin splints for good I plan on trying.

Let’s work on that. There are a few things that can help.

I am traveling a bit, but should be back soon.

The only sport when I go to 0% basal is intense swim training, for everything else I have some basal, so it is helpful if I can keep my pod on.

Agree! I usually use an override that gives 70% basal for both running and cycling but with a higher target BG of 90 mg/dL. My usual target is 80. This usually means I get very little basal throughout the run because my BG is usually < 90, so Loop reduces basal to 0. I’ll sometimes give a small bonus a mile before I stop if I’ve been at ZB for most of the run.