I’m just curious, think I read something like this here?

I’ve shed about 35 lbs over the past couple years. At this point, I’m about 6 ft tall, 170lb, a lot leaner than before, prob 12%bf or so. My current Libre2 sensor is inserted at the lower end of my rear deltoid near the tricep. It’s reading a consistent 30-40 points low, which is beyond the upper calibration limit for xdrip+.

Do leaner areas tend to create problems like this? I’ve stuck with my arms with the libre, because my chest was problematic last year. Maybe there are other sites which would work better? One drawback I can see with my belly, for instance, as opposed to my arm is slower response…a dexcom on my belly was 10 mins slower than the Libre2 on my arm when I compared the two sites.

I’m quite lean, but I don’t have issues with Libre 2 sensors reading low. I only use the back of my arms.

I am not skinny or lean and the LIbre always reads low at least 20-40 points on me. Except at maybe the lower numbers, but it is still off by 10-30 points low even then. I wear both at the same time as I use the LIbre to scan when I am swimming. I usually do a finger stick right before I go in just so I know where I stand and I will compare it to both. The fact that you can calibrate the Dexcom is what makes all the difference.

I wear my Dexcom on my arms, it works really well on the arms. I actually like the upper front of my arms really well too. You just have to be a little more careful to avoid muscle on the front.

@Marie if what you’re doing works for you, great! Keep it up! Personally, I don’t want a “third” device thrown in the mix, two is quite sufficient to inject confusion, and take time and money. Plus, “A man with one watch knows what time it is; a man with two is never sure.”…three watches?! The matter of “trust” is important for all of us. I marvel how each of us establishes “trust,” i.e. Libre, Dexcom, finger stick BG meter, other.) Initially, I’m sure its what we’re told, then what we believe from advertisements. Then, our experience takes hold and our “beliefs” rule; some settle and never change, others continually seek improvement. For me, without having a laboratory machine, recently calibrated by “known” references, I “trust” my “feelings” backed by a device that seems to match. Most of the time, that’s my G6…except when its “wonky” (scientific term!); it’s given some wildly erratic readings, so my “trust” is tempered. My highest “trust” is in my Countour Next USB BG meter, backed by my “feelings” and experience…neither have gone “wonky” on me…with influence of other people’s comments…ones I trust…except when they’ve gone a little “wonky!” But what works is what counts…

@TomH The only reason I have a LIbre is because I swim in the ocean 2-3 hours at a time and I go pretty far out. Otherwise I would not wear a Libre and the Dexcom. The Dexcom will not read in the water. You can’t even hold up your arm to get a reading as it wants to download all it’s data first before it gives a reading, But you can scan the LIbre underwater and get a reading while I’m even still swimming.

The ability to know what my blood sugars are doing while I’m swimming is what allows me to swim wherever I want and for how long I want. I take gel packs with me in case I need some glucose. It’s just me (with my hubby usually trying to find me) or me and my hubby. That has been a blessing, especially because ocean conditions can really vary! 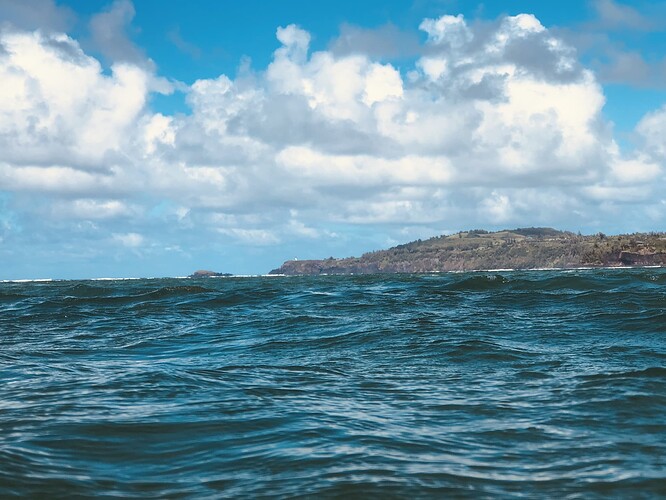 Wow! That’s some swimming effort you have! Thanks for the info on Libre being usable (flashable?) in the water; seriously, I tend to absorb detail I’ve no plan to use, but it comes up at the strangest times. Glad you can keep up with it all!

Btw, you mind saying where that is? Looks kind of like Bird Rock near La Jolla in San Diego. I used to scuba dive for abalone there in my younger days.

@TomH I don’t usually go out this far. Maybe half the way. But I have a tendency to follow things and that’s when I end up farther out than normal. That’s also when my husband is trying to figure out where I went. But the Libre allows me the freedom to be able to do it, otherwise I could end up in some serious trouble. Although most of the time after about an hour my BG levels want to go up, not down, but not all of the time!

The Libre has been amazing in helping me monitor my BG levels. I put my iphone in a Stash pouch for pictures and my Libre reader in another. Then I just push the button on and run it over the sensor while swimming. Instant number. Stash pouches have also been completely reliable as ocean water is supposed to be a killer for phones.

Another sensor, same thing. This time, I placed it on top of my tricep, in an area that seem to have some body fat. I’m on about day four or five, and it’s been consistently low: today for instance it read 80 while the contour meter read 158, in a relatively stable BG time frame.

I called customer service, and another replacement sensor is on its way. I must have gotten a bad batch of sensors? Last year, I don’t recall the libre 2 being this inaccurate.

@mike_g Interesting. It could be a bad batch. I had 4 Libre 2 that went into “restart me” mode when they first came out. All the same lot from the same place. I switched back to the 14 day until I thought they had to be on a new batch at the pharmacy. I know last year a bunch of people in the UK were having issues with the new Libre 2’s, I think they were going into error mode. Around that time they stopped asking for sensors to be returned to them, I think they are back to asking for them again. Then a couple of months ago I had three fail to start and one that worked for maybe a day? All of them when I pulled them off had bent cannula’s. So they definitely have some bad batches.

I had to discontinue using the FreeStyle Libre because it was so off. The first month it seemed to work fine even though it was rarely close to my regular meter reading. 20-40 pts difference. On the next rx order things went south. The readings were way off - up to 100pts off. Called support and they sent a replacement however that too was off. I went through the 4 sensors over the course of ten days- each being up to 60-100 off as compared to my regular meter. Abbot sent me another replacement sensor but that was off as well, so I ditched the whole idea and went back to my $25 Walgreens meter.

It’s been several months since that happened and I wished for a better outcome. I have a terrible time keeping track via finger pricks, always catching my bg way high or spiraling low. I’d consider a Dexcom but at around $300 a month I’d need to be far richer to swing that luxury.

@arnolfo Not sure if I’m reading correctly about “tracking via finger pricks”, but if meant that you’re not able to “see” a record/graph of your results, perhaps using something like the Countour Next meter (or other BT capable meter) that can connect to a cell phone (iPhone or Android) and software like SugarMate or other that can read the data from phone or meter directly would help? Though it sounds like perhaps your finger sticks may be to widely for the swings of your BG/BS?

Tom. With my standard meter i can only guess at the direction depending on how close my readings are. Some days i forget to take readings for hours on end due to focusing on work. Some days I don’t test often due to testing fatique. But that’s on me to not blow it off.