So, even though Liam is allergic to cats, his biggest wish for Christmas was a kitty tree so that the cats (especially the one that is big and looks like a cow with the black and white spots…named Nala) would hang out in his room more. The shot series we’ve had him on over the past few months have nearly ELIMINATED all the issues we were dealing with, with his eye sensitivity, swelling, becoming red and inflamed, etc…previous posted created on the topic as we were going through it.

Anyway! So, Santa filled that request and Liam can’t be happier because it’s a hit with the cats! Here are a few pics of the cats in their new hotel. Dusky…our midnight Black cat is in one of the pics, in the house, and you can only see his eyes. Liam sent me that pic on Discord and labeled it “creepy creature of the darkness” 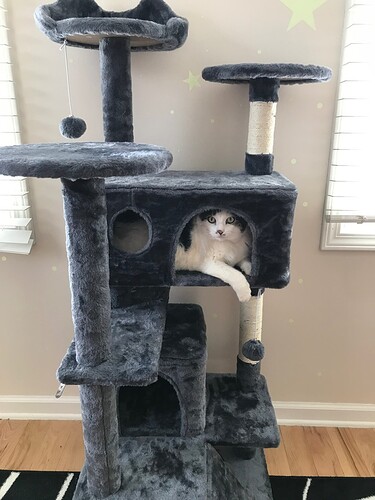 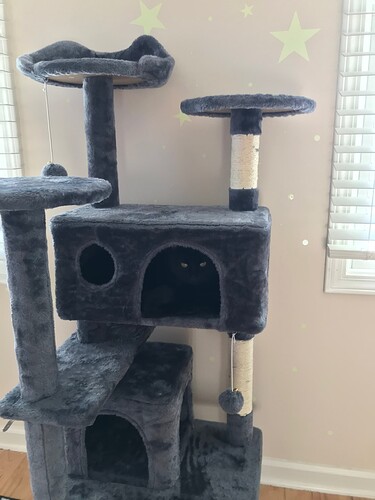 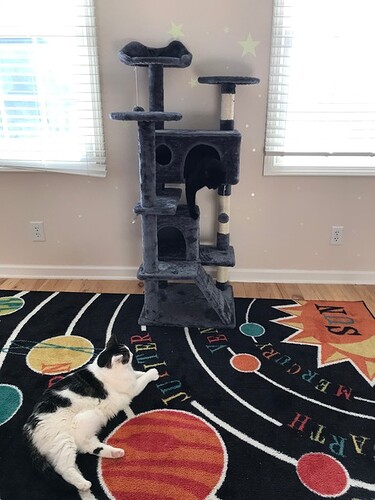 hit with the cats!

I have the same model!!

But quite worn out now. Cats loved it, especially since it was next to windows by tree with bird feeder. Cats are so spoiled.

That is what you call a win-win !!

“creepy creature of the darkness”

Love it! Must be kinda eerie at night if he sleeps in there…

I might even have some for younger readers that my sons used to enjoy (one’s a lawyer in NYC and the other is a PhD working at Meta, so I don’t think I damaged them too much

That’s both quite the cat tree and cat!! How heavy is Nala? We had two “orange marmalades” as they’re called in the UK, named Hobie (as in Hobie Cat, his brother as Hobbes as in “Calvin and…”); Hobie came in at 23.5 lbs! Looked about the same size!

So glad you found Liam’s issue and nearly have it resolved!!

I haven’t weighed her but I would wager 20s.

Took me a second, I didn’t see the cat in the second picture until I looked back at it. Cool pic.

That is great! For some reason, my cat would never use the cat play tree. I’d put her on it, and she’d immediately jump off. I finally ga e the tree away.

For some reason, my cat would never use the cat play tree.

She probably would have played in the cardboard box that it came in though!

I like to rub catnip into the corners of cat furniture if they don’t like it.
Seems to solve the mistrust issues pretty quick.

Also, with they much more sensitive sense of smell, they still smell the glue, and other chemicals from when these are made. For NEW ones, this can take some time to get that smell to go away enough for some cats.
Again, Catnip

The cat furniture is like the Mouse Trap game for kids!!