Hurry up and get your alcohol swabs!

Hey everyone,
Don’t know if it’s crazy yet where you live, but stores here are out of hand-soap, hand-sanitizer, and alcohol swabs!

I’m not too worried about the virus, more worried abut the ensuing sanity.

I have a bajillion swabs and syringes. I use swabs before applying pods and sensors, and also use swabs for my IV injections.

But anyway, a lot of the alcohol swabs on Amazon are out-of-stock, but you can still find some available. If you use alcohol swabs, hurry up and buy them before they are no longer available.

Also, I have some recommendations for some virus prep things, might be good to discuss.

Also, I have some recommendations for some virus prep things, might be good to discuss

This is the apocalypse I’ve been prepping for my whole life.

Make sure you get your Tito’s vodka for drinking!

Make sure you get your Tito’s vodka

Grocery stores are already out of isopropyl alcohol bottles and swabs.

But I bet liquor stores still have Golden Grain 190 or Everclear 190, or whatever your favorite brand is!

You can use either of those as a sterilizer in an apocalypse.

Just don’t get Tito’s for sterilizing, it is only for drinking. Totally agree with the 190 proof spirits.

Why you shouldn’t use Tito’s Vodka to make hand sanitizer — or attempt to...

Do not throw away your shot — especially to make your own hand sanitizer. As people worried about contracting or spreading the coronavirus that causes...

I’m stocking up on grizzly wintergreen, black box wine, booby trapping supplies. Guns and ammo quota was long since filled but if any of you who’ve been nice to me need a tribe, I will train you.

I’m also good on toilet paper and soap since I used those even before this mess so had some on hand.

I have some top quality liquor. I will be drinking it, not using it to wash.

I made the mistake of forgetting to buy alcohol swabs and hand soap (both of which I’m getting low on) until this week. Couldn’t add them to my Walmart order yesterday and haven’t made it to a store to see if they’re really out of stock or just limiting what you can buy through the app. Did I mention we’re in a huge state and the closest confirmed cases are all confined 4 hours away?

Don’t forget Home Depot and Lowes. While my Costco and grocery store were wiped out, both Home Depot and Lowes had them in stock. We weren’t stocking up, just looking at carpet, but it was hard to miss the signs limiting each customer to 10 items in the cleaning aisle.

Thanks for that reminder!

Have fun on your travels, @Sam.

Make sure you get the gamma sterilized version. 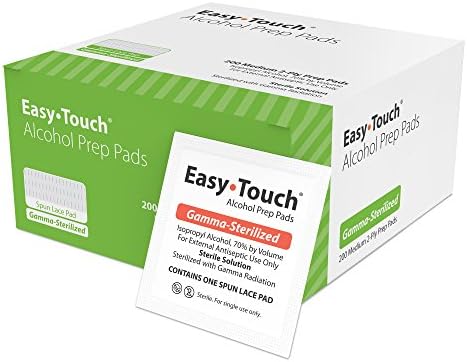 Don’t know if it’s crazy yet where you live, but stores here are out of hand-soap, hand-sanitizer, and alcohol swabs!

I do use alcohol swabs, I find them very useful when doing gel polish on my wife’s fingernails. For diabetes I use 91% isopropyl in a spray bottle (got it a couple of years ago from Walgreens, just keep refilling it) and those little round cotton things apparently intended for removing makeup.

When travelling I do carry the swabs; they are easily to use when changing a pod on an aircraft, however when on the ground I have pressurized alcohol spray cans; I haven’t seen them recently round here, but I still have a stock.

Realistically 70% isopropyl is fine and, indeed, I remember once when I was twelve the doc suggesting it was probably better not to try to clean the site before an injection. Mostly I use the alcohol to ensure adhesion of Omnipods and G6, but skin tack, etc, works for that.

Anyway, I live in Oregon. 95% ethanol is readily available from our liquor stores; you just have to ask for it. I have a couple of gallons stashed in the guest bathroom.

Our alcohol swabs are on auto-refill, so I think we’re good. I did what was (for me) “prepping” – basically I bought two weeks worth of groceries and refilled our general cleaning supplies soap, toilet paper, diapers and paper towel orders before we ran out. I also bought books on Amazon, a tile saw so that we can finally get to that house project when we’re both quarantined.

For diabetes supplies we already had excess insulin, extra sensors, test strips, sites and sensors, but I’m a little worried about the other supplies like skin-tac, needles, syringes, pen needles and unisolve.I may stock up on those. They’re not essential in an emergency, but we’ll use them eventually and it would be nice if lots of routines are disrupted to ensure that at least Samson’s diabetes care feels very routine.

We’re keeping Samson home from school this week. Kids don’t seem to be very affected, and even if his risk due to diabetes is 3X to 6X a similar kid his age, he’s still got lower risk than me. But I’m hearing real horror stories in Italy and just want to make sure we’re doing everything we can to stay out of the craziness.

but I’m a little worried about the other supplies like skin-tac, needles, syringes, pen needles and unisolve.I may stock up on those.

Let me know if you can’t get syringes. I can help you out there.

I hardly use any alcohol swabs. I only use them before sensor insertion.

My pharmacy’s first aid section was annihilated. Fortunately the general public who is panic buying doesn’t seem to know to go to the diabetes section for the rest of the alcohol swabs.

Thanks for the heads up, @Eric. Walmart is showing out of stock and Amazon’s prices seem awfully high to me for what they have in stock. Maybe I’m wrong but it was 3x cheaper buying locally.

30 posts were split to a new topic: Discussion of Covid-19 and Diabetics

4 posts were split to a new topic: Preparation for Staying Home for A Bit - Covid-19 related

@Eric
I would be interested in your comments about prevention of the Corona virus.