G6 - Why I calibrate instead of using the code

G6 calibration (or non-calibration) has been discussed here a lot lately.

I calibrate my G6 instead of using the code. But I also think it’s important to continue to try out different ways of doing things. A person who has tried something both ways has a lot more of an informed opinion than a person who has only tried it one way and tells you that one way is the best!

So in keeping with continuing to try things out and look at them in different ways, I did this sensor with the code. Just as a little test of how it worked. And I have not calibrated it at all since insertion.

And it’s been like this the whole day. With calibration, I could change this. But with no calibration, it’s apparently going to continue to give me useless numbers.

Just a few pics of the day… 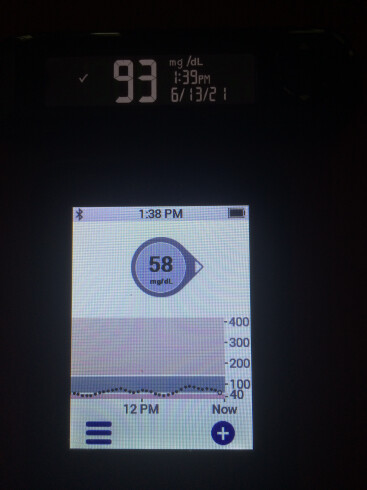 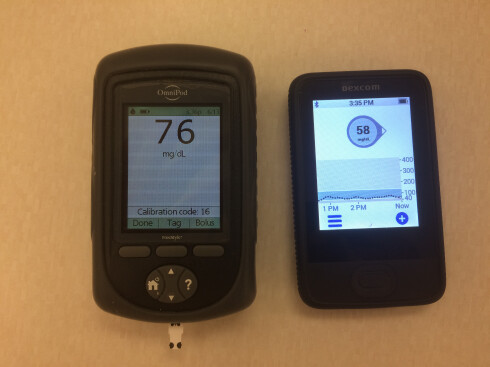 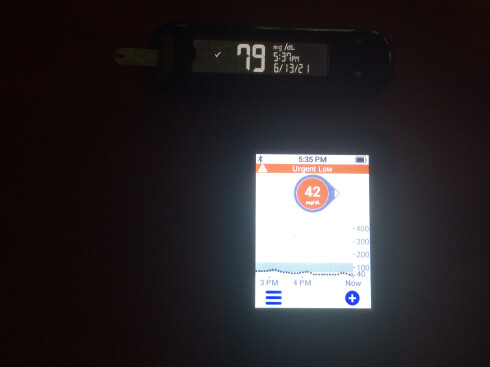 You can see from the pictures that the G6 still has not figured it out. It’s not like it eventually caught up to the meter. My CGM has been flat-lined low the entire day. And without calibrating it, I am not sure it will ever correct itself.

Agreed. Folks who don’t have these issues believe it’s just a matter of trying to “cheat the system” and that it somehow dipped low and you are catching it in the rebound… But that’s just not true in your case or in ours. Previously, on several occasions, I have tested every 5 minutes during the fall, while “low” according to the CGM, and on the move back up and our numbers are always higher and never dip low through it all.

Having said that, after testing the G6 in all ways (documented here in FUD), and because of the very fast rebounds we are now experiencing with the G6 when Liam does go “low”, we are currently doing code with no calibrations. If that changes we will go back to no code + calibrations.

Dexcom G6 shows 105 with slant arrow up. (Expected since just ate some food and bolused prior to eating).

To me that’s acceptable noise and delays between blood and interstitial reading.

I do enter code, and bg readings on day 1,2 but only calibrate if far off. I use Tandem pump and let the dexcom readings control insulin. I also have good recognition of pending lows, so on occasion will feel low when dexcom says ok, and confirm with meter.
On some occasions I will calibrate dexcom. But more intuition than science on my decision.

I see results like yours ( if not worse) in the first 12 hours. After that, not so much. I also believe accuracy depends on the person and their body. I’m fortunate with my Dexcom accuracy and I rarely calibrate.

I do test enough at various times after the 12 hours that I do trust the readings (especially when low). Is it perfect all the time? Not sure, as I don’t test that much anymore.

From an A1C standpoint it’s accurate enough to keep me in the mid 5 range and out of the emergency room, so I’m happy.

For me, up until about 3 months ago, calibrating was better. But I think perhaps they have improved their manufacturing (at least on certain lot numbers). Customer service is “expensive” and product improvements can reduce those costs.

How do you make a sensor last 17 days? Mine always petters out at 10 days or less, I’m putting it on my arms though?

Mine always petters out at 10 days

Do you mean sensor end OR bad data/sensor error ?

At 10 days, it will stop, and Dexcom intends for you to remove it, and insert/start a new sensor.

However, the transmitter can be removed (leaving sensor in), wait 15-20 minutes, then put transmitter back in and start as though it was new a new sensor.

There are several posts here with more details on getting past 10 days for each sensor, referred to as a restart sensor.

It’s been a while since I had a G6 sensor act like that, and I am in “never calibrate” mode. When I have seen those flatline lows it was a precursor to premature sensor failure. Flatline lows were happening between sensor error/time outs, with total failure following within a day. I’ll be curious to hear if that sensor dies prematurely.

I think that I will start calibrating as well. I have noticed large differences at times as well. Dexcom said it could be with interstitial fluid/ hydration or if the filament wire gets compressed. I noticed greater than 50% difference in readings between the glucometer and G6 before.

I am doing much better in no-code mode and will continue to do so!