From blurry eyesight to a clear vision for life

About 33 years ago I had 2 consecutive days (nights actually) of being unable to focus. The 2nd was worse, as it didn’t go away. I went to the clinic, but my doc was on vacation, and the ophthalmologist was in surgery. They had another doctor consult with me, but he was hopeless. As I was about to leave the ophthalmologist was free. He did a complete exam, told me I was 20/50 with my glasses, and he could write me a new prescription, but he told me to get a fasting blood glucose test as my condition was common in people with high blood glucose levels.

That’s the beginning. I was diagnosed with type 2 diabetes mellitus and became one of the most compliant T2 around. At the time all of our health care was through the Scott and White health plan. That meant all of our doctors, nurses and educators were part of a team to keel us healthy.

My wife and I attended about 3 sessions with the CDE. I still have the binder they gave every diabetic patient. 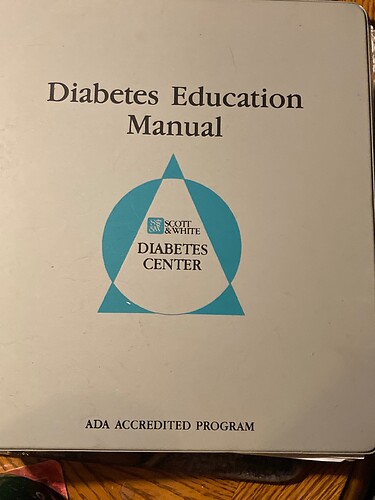 Shortly after diagnosis I experienced some slight chest pains, That lead to my first ECG and a stress test without contrast. Everything was OK with the ticker except for right bundle branch block, which I probably had for life.

A year later I had a stress test with contrast that showed possible scaring on the bottom on my heart. This lead to a cardiac cauterization, which showed no issues. I have had about 7 of these type stress test. The last one was different, a PET scan. After all these years the heart seems to be healthy.

The only problem I had with my original diabetic team was the ultra thin, food hating, especially fat, is the enemy dietitians. I don’t think they understood the dietary needs of those with insulin resistant type 2 diabetes mellitus.

Fortunately I found Dr. Bernstein’s book. While I could not sustain for long on ultra low carb type diet he recommends, both LCHF and other information in his book got me on the right track.

We lost that great diabetes team, as the company I worked for dropped that plan. Since then It has been touch and go, but having that excellent foundation to build on has been a lifesaver.

As is common with T2DM, the disease has progressed. My blood glucose management is very good with diet, exercise, Metformin, Dexcom and a Tandem pump.

One thing that wasn’t made clear to me until it began is that T2DM is progressive. I was bamboozled after 10 years of very good BG management when it started spiking regardless of diet or exercise.

Well that’s pretty much my story. Every day is a new day. Some require less insulin and some require more. But, everyday is a good day.

Interesting your diabetes like mine was all about the eyes. Went to lens crafters to get new glasses. Optometrist measured and said come back in an hour. I went out in mall and got an ice cream cone. Came back and couldn’t see out of new glasses. Had no idea what was going on and nether did he. He yelled at me and said he couldn’t fit me with glasses. I left crying and upset. Never did he suggest diabetes nor say go to a doctor. In meantime went on camping trip. Ate and drank everything in sight. On 8 hour car trip home with husband, he would stop car and I would pee between car and door. Very ignorant about diabetes. I thought they just couldn’t eat sugar. When home friends mother a nurse mentioned diabetes. Bought litmus paper. Very purple off chart. Called ER and said I think I have diabetes. Measured 785 Type 1 and was in hospital for 8 days at 36 years old. ( 70 now and doing well.) Pregnant 6 months later. Also didn’t know diabetes a leading cause of infertility. My story.