Hiya, I’ve just switched to the t:slim x2 but I’m just really struggling with the extended bolus. My problem is, between 2 kids, 4 ponies and 12h shifts, I am not getting my (fully carb loaded) meal any time before 9/9.30. Historically, with the Medtronic, I used the dual wave option over 5 hours. I have tried splitting the bolus into 2 ‘extended’ sittings but that sometimes means I have to stay awake until 11.30 to do my second bolus and with a 5am start, this is killing me. Or I do a one hour then 2 hour extended bolus but again, it is forcing me to take on board insulin faster than my body can release the glucoses. I then crash, followed by spike - both of which alarm me repeatedly during the night. (Incidentally, I do not arm the sleep mode as this only makes everything worse). I then took off the control IQ at night but find myself still being woken by either too high to too low BG. I can probably tailor this but it rather defeats the point of a closed system.

Add to this, the pump repeatedly alarms to say I have lost signal. Yet the pump sites, facing outwards as instructed, in my bra. I can’t get much closer than that!! I spoke to Air Liquide about this as it happen from day one. They told me to change sensor, which I did. After 24h it settled but today (Sunday) it has alarmed about 6 or 7 times during to lost signal.

Suffice to say, I am feeling exhausted and more than a little bit down about things. I don’t mean to sound ungrateful…as day time, (and signal loss aside) this pump is the best thing ever, but I dread and hate the nights as I get woken at least 4 or 5 times and am decimating my glucose tablet and nutrigrain bar supplies. I just cannot seem to get it to match my lifestyle. Help!!

@bigbird42 I’m not sure this addresses your issue but I’ll mention this feature anyhow. One of the very best techniques I employed on the X2 was the extended, square-wave bolus. This is different from a dual-wave bolus. With the square wave, you enter what percentage of your dose you want to give immediately and the amount of time in which the remaining insulin will be evenly delivered. I’d often ask for 1% now and 99% over three hours. It was a thing of beauty to watch how that worked with pizza. Anyhow, here is a little graphic that shows how Dual Wave and Square Wave look. I highly recommend giving it a try. 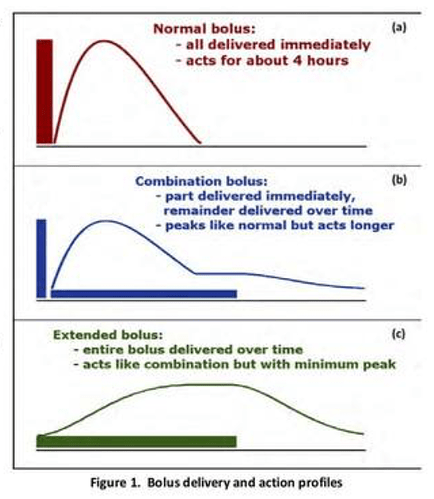 This looks great thanks but where do you find that option on the X2??

I highly recommend giving it a try.

If you already give dual wave extended boluses you are most of the way to setting up a square wave bolus. After entering the carbs you’d like to cover select for an extended bolus. By default, a dual wave bolus is shown (50% now and 50% over 2 hours). But tap on Deliver Now and input 1%. DELIVER LATER will autofill 99% over 2 hours. Tap on that “2” and change it to whatever you’d like, up to 8 hours. For the DELIVER NOW portion, the minimum amount is .05 units. I just keep it simple at 1% which always exceeds that low limit.

Good luck with this tool. It’s a good one.

My current X2 version will not allow changing the 2 hours, unless I turn off control–IQ. Maybe other versions do.
Mine is Moonlight v7.3.1.

Thank you for that clarification. I tended to keep CIQ off during the day and turn it on for overnight so didn’t run into this restriction. But it makes sense they’d need to limit this, actually. Omnipod 5, is even more restrictive - in automatic mode you can’t extend a bolus. In manual mode you can give an extended bolus but only as a square wave - delivered evenly over the length of time specified.

Thanks again. Just tried but when I try to enter time it still doesn’t allow more than 2 hours as shown (I try to enter 5 hours but when I get to putting in last zero the numbers are all blanked out

Interesting. Maybe it’s because the amount of insulin is too little to extended beyond 2 hours? While my X2 allows up to 8 hours extended, it will cut it down to less if the amount is too little.

I hope you find a solution. Has Tandem Tech Support been any help?

The bolus is usually quite large as it’s my main meal. I’ll contact t:slim and see what they can suggest. Thanks for your help

I experimented with extended boluses with C-IQ in an attempt to prevent BG rising about 4 hours after lunch. It was not effective, so I quit just doing a small manual correction that is an override of my normal correction.

Through observation I know that BG will continue to rise, and that a normal correction based on my correction factor will not work.

I was hesitant about using C-IQ or any automated system. I know that they work well for many but not all. C-IQ works well for me in sleep mode, preventing nocturnal hypos and keeping BG at a good stable level. Exercise mode not so much. It would keep my BG much higher than I like. I stopped using it all together.

Part of the problem during long bicycle rides I can get lows that are not real. My hypothesis is this is caused by a slight dehydration of the interstitial fluid by perspiration, causing a stronger difference between blood glucose levels and interstitial glucose levels. In effect, increasing the lag between the two.

Only once this year did I have a real hypo (not severe) on the bike. Dexcom was showing 69mg/dl trending down, meter read 54mg/dl. I was about 2 miles from the end. I treated the low with my own glucose/strong coffee potion. Retested and was up to 90mg/dl, back on the bike and finished with 100mg/dl.

This was unusual to see a real hypo when riding on the road. When using my bike on a trainer (stationary) Dexcom will often show a drop after about 20/30 minutes of pedalling. If don’t have any hypo symptoms I have continued on to below 59mg/dl. When I stop it will slowly rise again. Part of the rise may be because C-IQ will drop the basal rate to zero.

All this may be because I am a type 2 DM with ever changing degrees of insulin resistance/sensitivity. I just do what works.

I’d test out the square wave on X2 but it’s presently in shelf mode while I give the OmniPod a test drive.

And boy do I agree with @CarlosLuis. I’ve never met an automated insulin pump algorithm that I liked better than what I could do with a good set of manual pump tools. But I keep looking because, well, I like tech troubleshooting and it would be nice to off-load some of the focus manual care requires.

Oh, it’s not so bad in manual mode. And I didn’t think I minded tubing until I wasn’t attached.

I’ve never met an automated insulin pump algorithm that I liked better than what I could do with a good set of manual pump tools.

If you mean where I want the algorithm to fully take over for me, I could agree. But I view it as a cooperative activity, where the algorithm tries to do what it can while I provide guidance and steering. The algorithm generally succeeds overnight, and often needs help during the day. That’s still less work for me than doing it all myself manually. The algorithm is a helpful but incompetent sidekick, that’s all.