Emergency sugar for sleepovers (or deep lows in general)

@elver inspired me with his post on ReliOn dextrose shots. They come in a very sturdy bottle of hard transparent plastic, very compact, with only 2 fluid ounces of volume.

I went and bought a dozen. Then I took some sturdy plastic straws, cut them to about 1" over the level of the dextrose bottles, and taped them to the bottles: 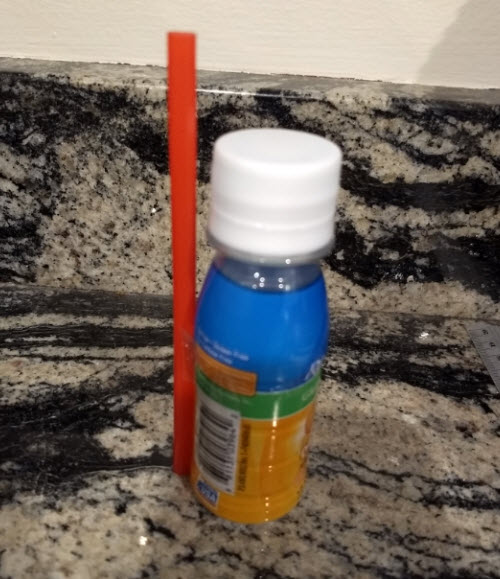 Voila! These appear perfect to me for emergency sugar for sleepovers, in case the parents or chaperones need to administer sugar in a deep low: I figure the last thing to go will be the sucking reflex. My T1D son is going to a school overnight to Chicago (they are going to a choir competition), and nights are the only iffy time. So a couple of these will go with a few bags of skittles to the chaperone, just in case.

The bottles are so sturdy that I don’t expect any problems with many refills. So I figure that, as @Jen suggested, we will refill them with water, corn syrup or dextrose, and sugar-free Crystal Light powder. In fact, it will likely be much better than the original: I tried the mixed berry flavor and I found it atrocious

Another cool idea that I use is this: We have a store called Cumberland Farms here in CT, they have great coffee. At the coffee prep station they have “ketchup packet” style honey for tea. I pick up a couple nearly every time I get coffee and have them in each car, my motorcycle, office desk… fast carbs that are free and last and taste good too.

@dughuze
I kinda like the honey idea. Sounds like a nice change-up for the basic tabs. Amazon sells honey packets pretty cheap. Unless I figure wrong, about half the cost of tabs on a carb basis.

And anywhere that sells coffee and tea offer these for free just like sugar and splenda. I HATE the tablets, yuk.

@Michel the only flavor that is palatable is the orange. The others are someone’s cruel joke of a flavor.

I have not tried this, but a friend whose sons were diagnosed as toddlers uses tubes of cake icing (on the baking aisle at big supermarkets), just pop the top off, stick in their cheek pouch and squeeze. Will absorb from the mouth supposedly, no choking. And being scary processed food of course it is shelf stable forever and can go in a kit for school or sleepovers.

I am not sure what the evil food coloring does to you, but I guess it would be the lesser of evils at that point!

My partner EH burned out on honey early on in diabetes. Which sucks because it totally works and those packets are great. And I even keep a little Nalgene bottle full of it and it never leaks. But he associates the taste with feeling really really sick from a deep low, and so now it’s a no-go.

We tried honey packets for Samson when he was napping at school and found them to be really messy for the teachers. But we do put honey in little syringes for nighttime and that’s really easy to administer.

Honey supposedly works faster, too, doesn’t it? Something to do with the fructose and glucose molecules already being separated by bee digestion, so you don’t have to wait for your own digestive process to break them apart? Or maybe the time difference is negligible in real life.

Or maybe the time difference is negligible in real life.

Yeah. I am not checking for 30 minutes anyway. I know the carbs will help assuming no stomach bug or other GI issues preventing digestion.
30 minutes gives enough time that I can be sure the carbs took effect as well as the BG is not being pulled right back down.

If I check any sooner (and don’t see the BG that I expect) then I am not sure. What should I do. Wait a bit longer? Muck with basal? More carbs? Like a squirrel caught in the road going back and forth. Until it gets squished. I hate being the squirrel.

If the BG is good after 30 minutes then we are all good. Move on.

It absorbs through the cheek as long as one doesn’t spit it out. Which I did, during many incoherent lows as a kid. The stuff tastes really gross, like slimy, cherry-flavoured toothpaste. Maybe if they made it taste better, I’d have let it sit in my mouth long enough to absorb or swallow it…

Gel would be better for incoherent lows or lows someone else had to treat (I wouldn’t use liquid for that). But I like the liquid over glocose gel for bad lows I’m treating myself. And of course, glucagon for lows that are really bad (unconscious) as well as mini dosing.

That was a great post. Thank you for sharing your methodology, as sometimes, even as an adult it is hard to know what to do next during a low. Thirty minutes seems like so long to wait when you/your loved one feels like crap. But you are right, any earlier than that, and we wind up giving too many carbs and having that awful rebound to high effect.

I would be amazed if that were true… glucose can absorb right through the mouth and/ or stomach. Other types of sugars not until its passed trough the stomach and is converted to glucose by various digestive enzymes

The glucose and fructose molecules are not linked so honey does not require enzyme digestion. It’s considered an immediate fuel source.

Another great idea (though not free) is found in bicycle shops, it is a sport gel used to keep you from bonking on long rides. It comes in awesome flavors. The chocolate one is like cake frosting, almost make you look forward to a low!

I use gu / blocks / etc for lows regularly since i have a huge stash anyway for running.

I think maybe we’re all saying the same thing? Honey does not need to reach the small bowel. Its glucose is “unbound” and is immediately available.

My impression was that fructose (honeys primary carbohydrate) would have to reach the small bowel to absorb whereas pure glucose such as found in glucose tabs, glucose gels, etc do not have to… can absorb anywhere between the mouth and the butt. I could be wrong I’m just going from memory