I’ve been a little frustrated with Afrezza this week, as every time I’ve used it, things seem to go ok initially, and then I have a delayed spike after the first hour (because of Afrezza’s short action time and my diet being fairly high in fat/protein, leading to a slower rise). Often I dose a unit or so of Novolog at the 1hr mark to catch the delayed spike, but recently I’ve spiked before I even do my first post-prandial BG check, so by the time I dose that 1u, it’s “too late.” I would often dip slightly initially after dosing, too, so I knew the timing was off. I finally decided to get really aggressive with testing to try to figure out the timing, and what better to test on than a burger and fries? Results below: 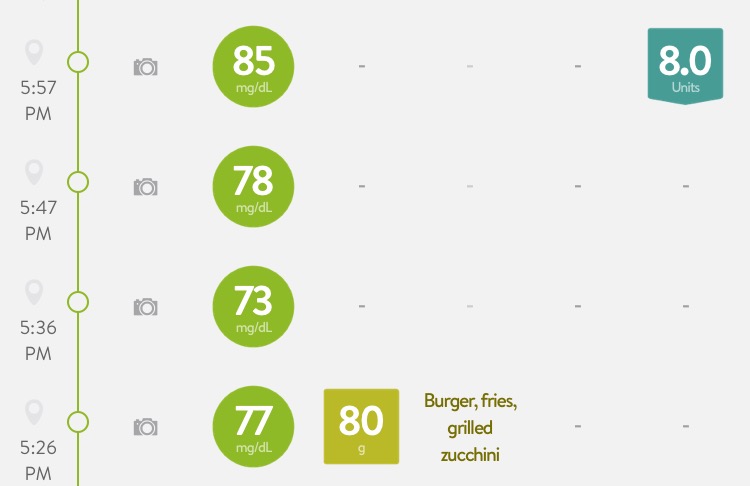 I tested every 10 minutes at first to time the dose when my BG first started rising. 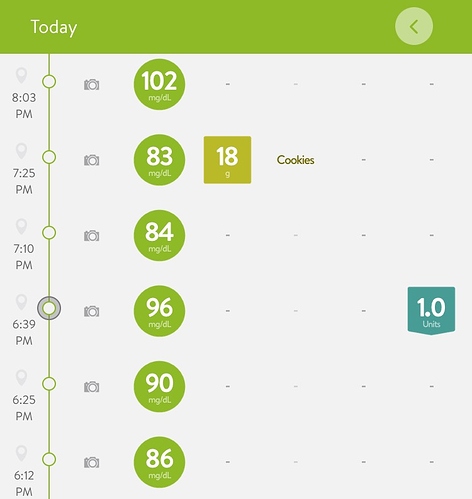 When I was still slowly rising even after an hour, I decided to go ahead and dose my 1u Novolog to cover anything after the Afrezza wore off. I thought if it ended up being too much, I’d get to have dessert! I ended up eating a couple cookies (minus a toddler tax), and wound up at 102.

I think I might not have even needed the 1u Novolog, but I’m glad I was more aggressive rather than waiting to see a spike before doing anything - I have y’all to thank for me being brave enough to experiment and risk going low (even though the risk often times is very small), which I would’ve been too afraid to do before now.

I’m just going to have to up my test strips budget (I pay out of pocket for ReliOn strips at the moment) for the next week or so to try to nail down the timing with meals we eat often.

Moral of the story: Afrezza seems like a “miracle” insulin, but just like any other type of insulin, you need to expect a few weeks of intense testing and tweaking before you know how to use it for you.

Moral of the story: Afrezza seems like a “miracle” insulin, but just like any other type of insulin, you need to expect a few weeks of intense testing and tweaking before you know how to use it for you.

LOL Yes, I do realize that. It’s just that everyone who tells you about Afrezza (like the reps, your endo, YouTube videos, etc) make it out like it’s this easy, completely-different-no-testing-needed insulin you just dose and move on. It probably gets more that way once you figure out your timing and all, but there’s lots of testing before then. It’s actually harder to me to nail down the timing/dose than Novolog.

intense testing and tweaking before you know how to use it for you.

I LOVE that you do that! This seems to be the only place on the net where everyone understands that this is what it takes!

You do have to test a lot with it, since it’s faster and doesn’t last as long it makes sense you’d be testing more and correcting more… it absolutely can keep your levels in your desired range more of the day than any other bolus though… you’ll learn over time to preempt spikes before they happen… but yeah it’s s never ending battle there is no “ah hah moment” where any of us suddenly figured it all out. Plus a heavy protein and fat diet will absolutely require more corrections with it

@Sam, I am pretty excited about how this turned out. Even though I’ve gotten pretty good at timing my Novolog dose, I still haven’t yet gotten that kind of result eating that many simple carbs with Novolog alone. I was feeling ready to give up on Afrezza except for eating out, but now I’m back to wanting to experiment and make it work for more than that.

For me, I wouldn’t consider a burger and fries anywhere near the simple carb and of the spectrum just because of all the fat…

Well, the bun (GF) and the fries are both simple carbs - that’s what I meant - though we made the burgers with lean ground beef and baked (from frozen) fries, so not as much fat as it would’ve been from a restaurant.

If you are paying out of pocket for your test strips anyway, and you want to be able to test on a frequent daily schedule, you may want to consider the Libre Freestyle sensors.
Expensive on the surface ($75/month paying cash and using the SingleCare discount card), but you can quite literally scan every 5 minutes or less, all day long, with data collected overnight, in up to 8 hour increments.
It’s been a major game changer for me, since starting on the sensors about 7 weeks ago.

I’m just going to have to up my test strips budget (I pay out of pocket for ReliOn strips at the moment) for the next week or so to try to nail down the timing with meals we eat often.

Thank you! I did start the FreeStyle Libre as soon as I could, and it is most helpful for Afrezza use since I now just wait until I see the Libre trending up before dosing.