Found these on amazon - I think they taste delicious if you like dark chocolate and they don’t even raise my BG 1 unit !

Great find! I just ordered a 2xpack. here is the link: 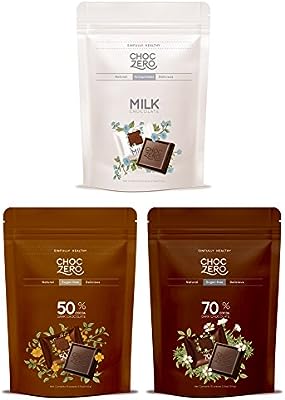 I see what looks like dishonest, or at least misleading, packaging. It says a 10g piece contains 5g of carb. This is virtually the same carb percentage as any other dark chocolate. Their ad says “Sugar free, no sugar alcohols, and no artificial sweeteners”. But the second ingredient in the ingredient list is “soluble corn fiber”. This is an ingredient that I haven’t run into before, but has a questionable reputation on the internet. “Soluble corn fiber” is apparently processed corn syrup (corn syrup is glucose). I did see a study that indicated it is metabolized more slowly than pure sugar, so this may be useful to a T2 diabetic that wants to slow down digestion due to insufficient Phase 1 insulin response. But for a T1, I suspect this would cause the same blood sugar effect, just at a slower rate.

If you buy this, I wouldn’t trust the ads, but I would test the effects. And of course report the results back here

“Soluble corn fiber” is apparently processed corn syrup (corn syrup is glucose). I did see a study that indicated it is metabolized more slowly than pure sugar, so this may be useful to a T2 diabetic that wants to slow down digestion due to insufficient Phase 1 insulin response. But for a T1, I suspect this would cause the same blood sugar effect, just at a slower rate.

This is what is in Quest Bars, which I find to have exactly that type of effect on my blood sugars—slower rise than pure sugar, but still much greater impact than what I would get if their suggested “net carbs” (with the effects of soluble corn fiber removed entirely) were accurate.

Edited to add that I still like quest bars, since I find that I can usually take insulin for them without prebolusing and have that work reasonably well, whereas that is not true for similar types of products that just have regular carbs/sweeteners, but I do not find Quest Bars to be super low carb.

Holy cow! However did you sleep?!? I’m going to have trouble sleeping just reading about the caffeine before bed.

EH and I once had a sleepless night in a hotel after consuming the chocolates on the pillow. Finally figured out that chocolate past about 4pm is a no-no for us.

You and 60.6 million Italians. That’s because, even though there is roughly four times more caffeine per ounce in espresso than in your typical drip brew, you’re only drinking 2 ounces in a double (70 or so mg caffeine), compared with an 8 to 12 ounce serving of drip (anywhere north of 120 mg). As well, we tend to drink espresso faster – in Italy, one or two sips is all it takes – so its concentrated caffeine works on the nervous system quite differently than if you lingered over a cup or two of drip coffee after dinner, slowly infusing that caffeine.

I wonder if there might also be a genetic component—we know there is variability in the genes for the liver enzymes (cytochrome p450 system, made up of a bunch of enzymes) that metabolize most drugs, including caffeine, and I’m pretty sure that the one that does caffeine has variability so that some people can be extremely sensitive to it and have it persist in their systems much longer and some very insensitive to it. Maybe some of the ethnic groups who have evening espressos also have more of the latter genotype?

It’s definitely genetic - I am someone who metabolizes drugs pretty quickly - something most noticeable in my bad old days when I used both recreational and pharmaceutical drugs for the same purposes - recreation !
Even when taking for the first time so it wasn’t a tolerance thing built up over time I would normally have to take double the dose of my friends and also I came to my senses first or never experienced anything at all quite a bit - when I took ayahuasca in Peru - it took 4 goes to work - all my friends were out from the first one
I must have a very aggressive liver - I certainly do from a sugar perspective as has been seen here from my previous posts - and the amount of sugar it can put out
I also think it’s why I’ve never had a hangover despite consuming very large quantities of alcohol in the past - my liver is metabolizing the alcohol quickly

I’m like this too re: hangovers (or at least, I was until my 30s, and now I can get very mild ones that I’m a huge wuss about because I’m used to not getting any), and I have a very aggressive liver as far as glycogen metabolism, so I’ve wondered if those two factors might be related. I’ve had my genetic testing done, so I know I’m not a rapid metabolizer on any of the p450s (I’m actually a poor metabolizer on one, explaining why I am very sensitive to certain meds), so I don’t think it’s those enzymes, at least not for me.

I think your right on the glycogen - I have stopped drinking since going low carb - kept to 1 glass of wine every couple of days with dinner - but I did over indulge once while in Mexico and had only 4 glasses of wine (12g carb!) - but I did feel terrible the next day - maybe it’s because my liver is so glycogen depleted - will find out tonight as have a celebration event so will definitely have a few drinks

If you buy this, I wouldn’t trust the ads, but I would test the effects. And of course report the results back here

thanks for that info jaG1. I would rather just take a bolus for chocolate, dark or light, (but, BTW, milk chocolate requires MORE insulin than dark…IMHO…at least for me with the experiments and experiences i have had. i love using chocolate for correcting lows

My friend ordered me some as soon as I told her I was diagnosed. I have a nice little stash of those